WARNING!!!
This is not a Garuda offical tutorial.
Garuda doesn't officially provide support for dual boot systems!
I have EFI boot system, for legacy boot It can be different!
Use my tutorial only for your own risk!

! Before you start to do anything make sure you backup your system first !

It's Recommended to install WIN 10 first with a Linux pre-created partition table and LInux after.

Why is it not recommend to install Linux on Windows:

The other way if you use your Garuda ISO, boot with the live ISO created by balena etcher and use GParted or KDE partition manager to make partitions manually.
This is how my partition table looks like: 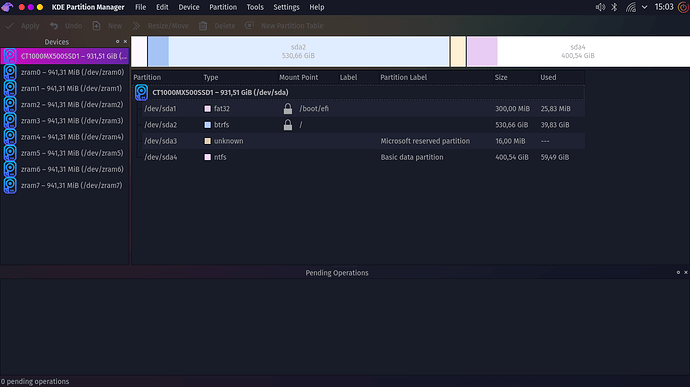 Maybe not everyone uses KDE so point also to gparted.

Can't test the tutorial, I "dual boot" only 5 Garuda DE's and can't remember this win stuff

3 posts were merged into an existing topic: Off Topic Chit Chat - (Silliness factor 5)

Amazing topic and tutorial! I Appreciate all the help! Cheers!

As a - slightly - alternative method, this is how I created a multiboot setup on MULTIPLE physical drives:

DISCLAIMER: DUAL-BOOT AND MULTI-BOOT INSTALLATIONS ARE NOT SUPPORTED BY THE GARUDA DEVELOPMENT TEAM.

ATTEMPT AT YOUR OWN RISK, AS LOSING ALL YOUR DATA AND BEING LEFT WITH AN UNUSABLE SYSTEM CAN BE UPSETTING.

BACK UP YOUR DATA EARLY. BACK IT UP OFTEN. YOU HAVE BEEN WARNED.

Awesome tips and tutorials guys. I just have one question. Are you guys going to respond to all the help requests when those who follow your tutorials have their systems meltdown from a multi-boot SNAFU.

Anyone can setup a dual boot, it's really not that hard. Fixing a dual boot catastrophe on the other hand can take a ton of skill and expertise. No other repair job in Linux is more complex than some of the messes created by multi booting.

Oh and BTW, the most important part is missing from your tutorials. That's the part where you advise the newbies to backup their system first. Cause sure as the day is long, most of the newbies fresh off the Windows boat will meltdown their system at some point and rarely do most ever perform backups. While you're at it why not do a data recovery tutorial for all the newbs who inevitably lose all their data from this, cause I hate responding to those help requests as well.

Sorry if I'm being hard on you guys, but these complications are some of the most difficult issues to reverse when a breakage occurs. Losing all your precious data can be a heartbreaking life lesson. So be careful, because you're playing with fire if you're inexperienced.

If someone follow my tutorial and have the correct partition table boot/efi on sda1 and Garuda on sda2. There is no WIndows update can overwrite GRUB in the future. That's why it's recommended install Windows first. Otherwise you have to repair again and again the boot partion troubles caused by Windows updates.

@tbg Are you guys going to respond to all the help requests when those who follow your tutorials have their systems meltdown from a multi-boot SNAFU?

Of course I'm eager to help people correctly followed my tutorial. I made it so I'm responsible for it.

@tbg The most important part is missing from your tutorials. That's the part where you advise the newbies to backup their system first.

@tbg Fixing a dual boot catastrophe on the other hand can take a ton of skill and expertise. No other repair job in Linux is more complex than some of the messes created by multi booting.

This is how linux works. There are many solution for a problem. Try it, Test it and face the consequences for all the decision you made and learn from your mistakes, the less effective solutions you tried and choose a better one.
Community is for learn mistakes made by others and solving problems together
and don't blame Devs, Admins and People trying to help you if you make something wrong.

I need some people following my method to test it and feedback how is it going to get Your, the Devs and Admins trust to recommend this as a solution without qualm.

I do appreciate your efforts, and also your offer to help out on the forum.

If someone follow my tutorial and have the correct partition table boot/efi on sda1 and Garuda on sda2. There is no WIndows update can overwrite GRUB in the future.

I wasn't just referring to Windows overwriting grub as the only potential pitfall. You are far underestimating the newbs capacity for causing destruction when performing manual partitioning. Whenever an inexperienced user is at the controls partitioning there is a great possibility they will make an error. This can easily result in an OS partition (or a full data drive) being wiped, or worse yet overwritten. At least if they realize their mistake before actually overwriting the partition might be able to be recovered using testdisk. Once it has actually been overwritten the data is pretty much unrecoverable. This happens far too frequently with those unfamiliar with Linux unfortunately.

After answering thousands of support requests at various Linux forums there's only one thing I know for sure. Newbies have an unlimited capacity for screwing up the most well spelled out and clear instructions. When their mistake only involves changing their desktop wallpaper no big deal. When it comes to mistakenly overwriting partitions, or entire data drives this can have catastrophic repercussions (and the distro often gets blamed).

The unknowing user if only doing a single full disk automatic install of Garuda using Calamares at least has limited potential for causing destruction. As it is assumed that all data will be wiped in this situation the user should hopefully not lose any data mistakenly. When installing a dual boot you never know what kind of mistakes an inexperienced user might make that may cause data destruction.

Along with the advice to backup all data prior to installing I would also add one more piece of advice. I would advise all users to either power down, or physically disconnect any data drives not having an OS installed on it. This simple precaution will eliminate the possibilty of overwriting
a storage drive containing a lifetime's worth of irreplaceable family pictures and videos. Unfortunately, no mater how often you caution users to backup their data it is usually ignored (as it is too much effort for the average Windows user). Simply removing extra data drives from the equation requires little effort in comparison to full backups, so it is more likely to actually be performed. This also helps limit the possibility that if backups were actually made that the user won't mistakenly overwrite the backups themselves.

Sadly, newbies no matter how many times you warn them, usually disregard most cautionary advice. That is why Garuda simply tells users we do not support dual booting. Some users (like everything else) mistake that to mean Garuda is impossible to be installed as a dual boot. Obviously that is not the case, Garuda can be installed as a dual boot like most other distros. We simply mean to caution users in advance that if they insist on installing Garuda as a dual boot not to expect official support on our forum. Some kind user may still come to your rescue if you mess things up badly, but we are simply letting users know not to rely on having dual boot issues officially supported.

I appreciate you guys trying to help others. I am only trying to clarify the distro's position on dual booting and the reasoning behind it. Users will inevitably do whatever they're going to do regardless of how many times they are warned anyways. However, in good conscience an effort should be made to prevent unknowing users from shooting themselves in the foot if at all possible.

I've added a disclaimer. Yes, if I see someone who needs help setting up a multi-boot system, I'll help if I can. Usually my advice will be of the 'nuke it and start again' type. With an added, 'Oh, you did back up your stuff before you started, didn't you?' for good measure.

About dual booting and newbies...
I'm one of them, and would like to dual boot Garuda. Yes I made the system backup (TestDisk) of all my important files, and do not have any other hard drives connected other than the primary SSD.
The procedure I heard was that I first needed to manually make a partition using the disk manager inside of Windows such as this one 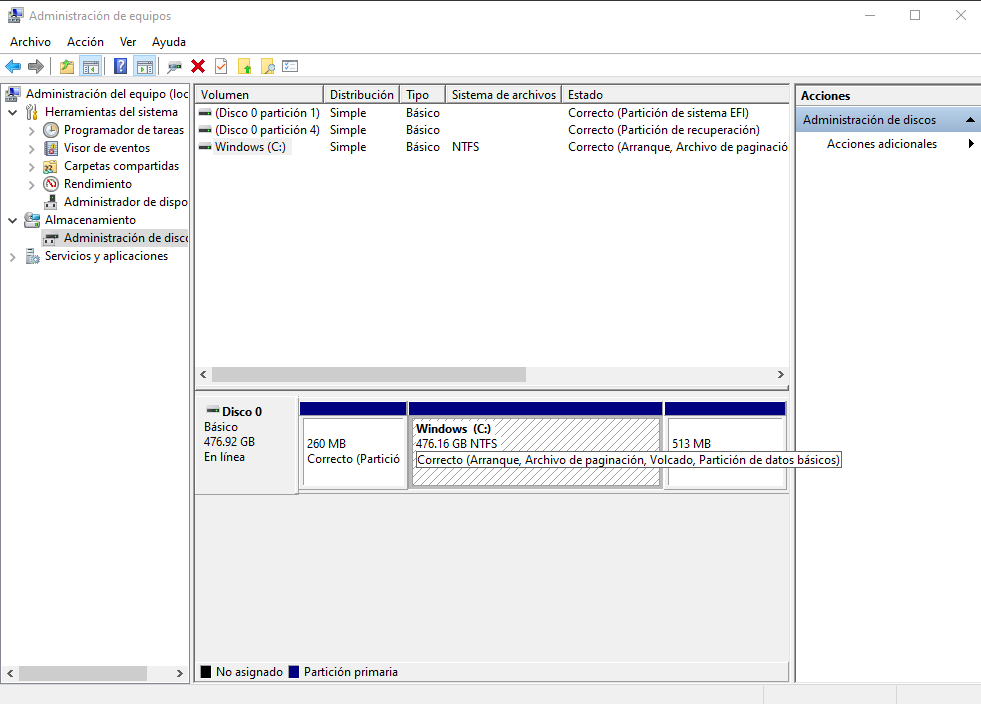 imagen_2021-02-18_080020981×704 31 KB
And then using UNetBootin with the ISO of the OS I want to install it would automatically set itself to the partition I had created.
Can you either confirm or provide me with another method that I can use?

I am fully aware of what I'm doing and take full responsibility in the consequences.

Welcome to the forum.
Making backup to the same hard-disk that you going to modify is useless,
if your goal is to backup your movies, games, music ...etc.
If you don't have any other data drive, not feel familiar with manual disk partitioning and you want to keep this files, then there is no way for Dual Boot.

That does not answer the question though. I'm just making sure I'm doing the correct procedure. When did I say that my goal was to backup media?
My question is (more precisely), assuming I make the partitions in my disk, how would the correct procedure be for a Dual Boot IF I use UnetBootin?

You don't have to do anything, except select "replace a partition" during installation and mark the appropriate place.
There are plenty of Garuda install tutorials on the internet.

In terms of backup, the important thing is to do it with a reliable external hard drive. Anything connected to the PC during the installation process is at risk.

I don't recommend you use UnetBootin to create your Garuda live installer from the ISO. Personally I have found it okay for Ubuntu-based distros, but unreliable with Arch-based distros (and Garuda is one of those). If you are going to do it from Windows, I suggest Rufus instead.

If you use the Windows partition manager to manually create a partition, it will be an NTFS or FAT partition. You will have to confirm that the Garuda installer is reformatting that new partition to BTRFS during the installation process, or bad things will happen. I don't know what they will be, but I don't suggest you try to find out.

Personally I use GParted and no other software to make changes to partitions, but that means another ISO and another USB to use.

Good luck with your installation.

I suggest Rufus instead.

Please note that use of Rufus is officially not recommended:

Since "Knoppix" has existed, I've been using Windows and Linux in parallel, although Windows has gradually become a minor matter.
To make a USB stick bootable, I use Linux on-board tools instead of downloading software under Windows.