Whats up ladies and gentlemen!

First of all, a happy new year to each of you!

What can be better to start a new year with than a recap of the last one? So lets have a look at what happened in 2021!

These are pretty much the highlights of the year 2021 in Garuda lands. Its safe to say that the distribution as whole matured a lot during this year - all of this wouldn't be possible without the support of our amazing community though, which is why we want to say "thank you" to every one of you. Thanks for taking part in this journey with us!

Since this is a new major release, there are of course some new changes as well! This release focuses on fixing a lot of little bugs and also features improvements to our Garuda tools.

Our system maintenance tool is now able to inform about partial upgrade situations and systems being out of date. Since out of date is a quite subjective term, it should be good to note that this is 2 weeks in this case. We observed that especially people who are new to Arch are either not updating the system often (which should be done on a rolling release Arch base to smooth out things) or causing partial upgrade situations which then cause applications to not work. The addition of those notifications should provide some needed help. Of course, they can be turned off individually if a user decides they do not want the additional guidance 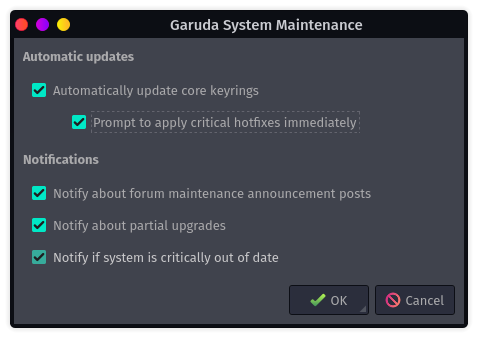 As managing an Arch system can be challenging at times, we felt like there had to be a way to help our users with it. The result is our garuda-migrations and garuda-update. We introduced garuda-update some time ago as official way of updating our distro and lately it finally became useful! The recent update of Python to version 3.10 made re-installations of all Python related packages necessary, which was was then handled by the update command on its own. Garuda-migrations however will be used for configuration migrations exclusively to prevent manual interventions.

If you followed the #development category, you might have noticed that there were ongoing efforts to separate the Snapper/BTRFS part of Garuda Assistant into a new application - the result is called BTRFS Assistant. This step has been taken in order to let other distributions profit from the application as well, if they decide to use BTRFS snapshots along with Snapper. The UI and feature set stayed mostly the same, so there is no need to learn a new tool if you were familiar with Garuda Assistant already. Additionally, Garuda Assistant will notify about the functionality being removed and then offer to start BTRFS Assistant. 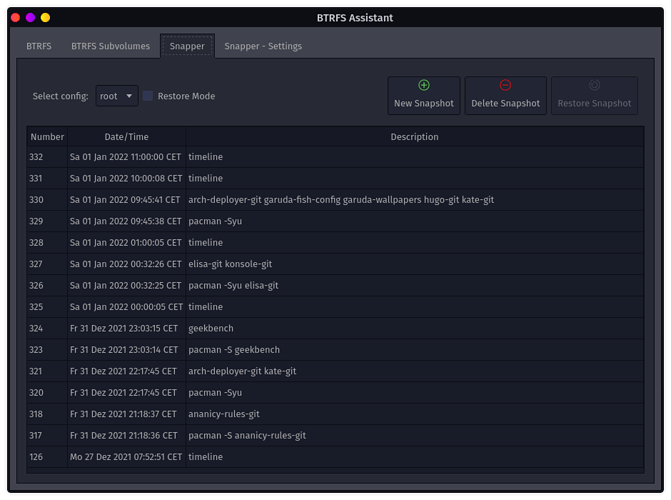 Since Chaotic-AUR features a whole bunch of daily built KDE/Plasma -git packages, the idea of an edition dedicated to shipping them came up lately to allow for following KDE's development and testing new changes safely. Likewise, this edition is shipped in barebones state without additional modifications to the desktop look itself. The edition will be treated as community edition and is being maintained by @alexjp while packaging will be done mostly by @IslandC0der and @dr460nf1r3. As not all of the packages in AUR are of high quality, a good amount of them are being built from Chaotic-AUR GitHub, you can have a look at the package list to find out which ones. To preserve good quality of PKGBUILDs, all of them were adapted to asp (using Arch PKGBUILD as base, adopted to git sources). Please note that this edition is still aimed at experienced users who know about the dangers of using a full -git desktop. Since the packages are being built from master branch, occasional breakages can happen naturally

Observant main website visitors may have noticed a new addition at the bottom of our download page. Long promised to come back, the Cinnamon desktop environment provides a slick experience with lots of customization options. This edition is maintained by @Naman as community edition and features our beloved Sweet theme and Beautyline icons.

Starting with this release, our tools will now use shared code in form of the garuda-libs package. In this case, it is being used to automatically choose the right terminal to run commands or scripts in. So far, the Setup Assistant and Garuda Assistant are making use of it, integration with more apps will probably come in the future.

To make Garuda more appealing to not only desktop users or gamers, we decided to not pre-install performance-tweaks anymore. For people with laptops, this could cause less battery time. Even though it is easy enough to change this in Garuda Assistant, having a more "neutral" stock configuration was quite appealing. However, the Setup Assistant will detect PCs/Towers and offer to install performance tweaks during the setup to allow easy access to those tweaks during the setup process. The dr460nized and GNOME editions will be featuring power-profiles-daemon, a convenient and very well integrated way to control the devices power profile. It can be used on other editions as well, although it needs to be operated via command line then. We plan to integrate an option to control this in Garuda Assistant in the future.

Our wiki finally received a very much needed upgrade! Most of the content was quite outdated and didn't feature our latest tools. This is no longer the case though, and all sections have been updated and looks were adjusted to be more consistent as well. Please note that this wiki's purpose is not to reinvent the wheel rather than adding Garuda specific information to the information already available in the holy bible (Arch wiki

) Since it is in a pretty good shape now, translating it into other languages is a very welcome way to contribute something to Garuda! In theory, contributions could even happen via GitLab as all content is being backed up bidirectionally. We also switched our uptime notifications to Freshstatus as it allows for automatic downtime reports which can be updated with status reports which makes status.garudalinux.org the official statuspage of Garuda. Eventual maintenances will also be posted there, so make sure to check this out the next time something looks down for you

Apart from the already mentioned changes, a lot of little enhancements were performed. Among them are the replacement of reflector with rate-mirrors for our update command, tightening of our Polkit rules and the exclusion of snapshots during updating the mlocate database. Also, graphic configurations are now handled by Pacman using meta packages which allows us to update graphic configuration like normal packages. The dr460nized editions configurations were updated (Applying the Sweetified global theme can apply the Latte layout!) and file content indexing of Baloo was disabled to help with high resource usage during indexing. i3, Qtile, Sway and Wayfire were cleaned up and also got some fixes. Lastly, our default browser FireDragon has Firefox accounts enabled again. However, it does not sync data to Mozilla rather than our own selfhosted syncserver by default to preserve the private by default nature of the browser.

A brief update on donations

In late July, in an effort to help sustain Garuda for the long term we setup several ways to donate to our beloved project. Up to this point, we've collected roughly 1.400 €, (which is a fantastic amount for such a short amount of time). So far, we've only had to cover our yearly domain costs from this funding. The anticipated plan is to wait until we reach around the 2.000 € level. After we reach that point we will start investing in further distro resources and contribute to some of the great projects that help us provide our favourite operating system to you. Thank you for believing in us, and the future of Garuda!

We hope you enjoy the release as much as we do! Have a good time and a happy new year

Downloads are available on our website or using Garuda Downloader

What happens when there are no more eagle names?

We'll think about that when the time comes, or we'll do it like everyone else, eagle 1,2,3,4

Fortunately, variety is one of nature's prerogatives.

btw ... I have to say that so far I haven't done anything special.
mention should go to @zoeruda !!! thanks @zoeruda !!!