We are back! With the next level of performance improvements.

The current Arch Linux repo is compiled for compatibility with older CPUs. But who has an old CPU on the gaming computer? 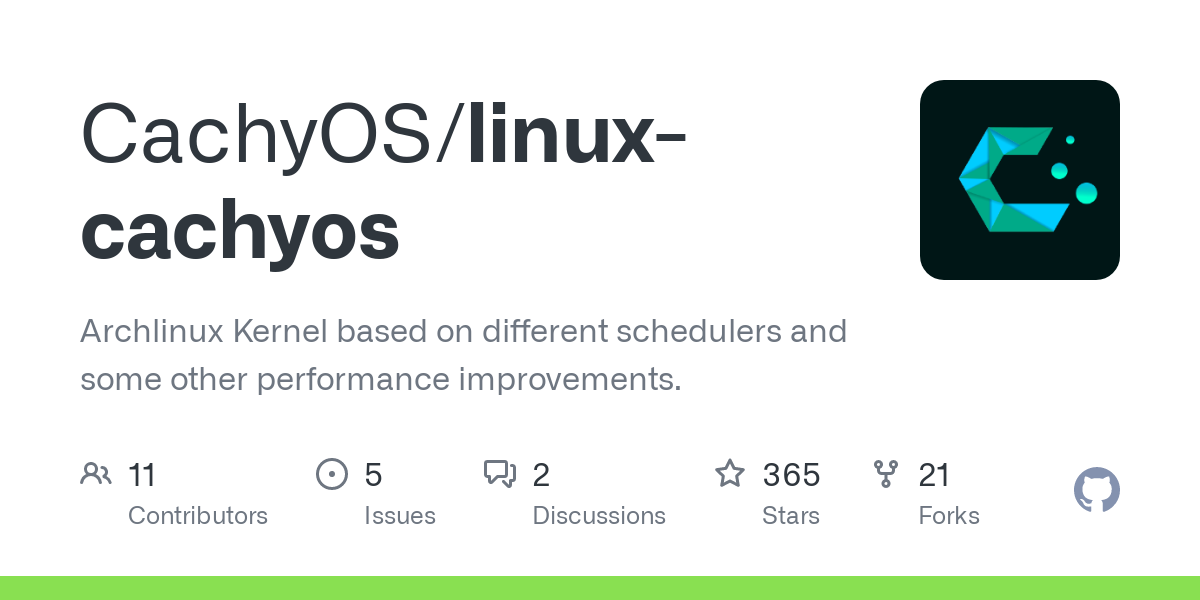 You can use our performance-optimized packages in the cachyos repo on pretty much any Arch-based distro.

Finally, execute this command to update all packages to x86-64-v3.

You can also install and use our kernel - linux-cachyos

Arch Linux did some benchmarks, but we already provide generic-v3 repo.

You will get 10-30% performance uplift

The geometric mean of test results was around 15% higher on march=haswell then
on baseline x86_64. Apart from john-the-ripper/md5, the tests were up to 36%
faster, with a median performance increase of around 10%.

If you have questions about cachyos repository with x86-64-v3, you can contact us.

Check out the CachyOS community on Discord - hang out with 236 other members and enjoy free voice and text chat.

I don't think anyone will choose Garuda to install on a very old computer.

I don't think anyone will choose Garuda to install on a very old computer.

Does 10 years count as old?

Fresh install on my owned since new Macbook pro 10.1 retina. All is well except the video driver. Using the automatic loaded open source drivers at install. At 2880 x 1800 all gets super laggy, including Youtube vids. Barely touching the processor or ram in either mode. If I clock the screen down one to 1920 x 1200 everything is absolutely perfect and ripping speed all around. Anyone have a workaround to get the full resolution working? Kind of noob so any help is so greatly appreciated. Syst…

There could also be an auto-selection of repos during install to have the best of both worlds.

It could be a lot of hassles to have it embedded by default, so it probably won't happen soon. Which means better do the switch manually. I'll let others do the testing and fine-tuning first though.

Thanks for another guide

Shoutouts to @ptr1337 and @vnepogodin! Always great to see friends at CachyOS come up with new stuff

Good shit guys! I’ve always loved what you guys are doing with optimisation from the kernel to the packages. I used to use your guys repo on my system ages ago but had problems with some programs not opening like dolphin. Don’t seem to have any issues anymore which is perfect. Only had to delete the baloo directory but other than that no issues. I enjoy cachyos with its performance and optimisation but I miss too many features I enjoy on Garuda. So with bore kernel compiled myself and this repo it is really close to a merge of awesome Garuda software and performance improvements and optimisations of Cachyos. After updating my system there was almost 6gb worth to update including some base packages with the optimisations added from cachyos repos and after a reboot it really feels so much faster. Programs open faster and feel faster and even basic things like web pages and playing videos feel faster. So thanks for the hard work I appreciate it very much!

I have tried CachyOS's repos before, but I prefered ahlp because it follows arch's repos ( core, community, extra, etc ), instead of a single one.

It might be an essential hint to comment out the regular (non v3) cachyos repo that gets added by using the script provided. Most packages are already available in Chaotic-AUR and get rebuilt more often.

Is it essentially identical but just split into the normal core extra and community repos with anything in the official arch repos rebuilt with these optimisations? Sounds interesting regardless. Might give it a go although cachyos repos are amazing themselves

I installed the packages and Firedragon is noticeably faster for opening heavy web applications!

btw why is cachyos not available from Garuda's kernel installation window?

I installed linux-cachyos manually following the instructions but the kernel doesn't show up for selection at boot-time. How do I boot on it?

Install the headers package for the kernel you install

The instructions include that

Is it supposed to appear in the list of boot kernels, or it simply applies it to the default boot?

Got a first problem: WPS Office no longer launches.

Also, in the package manager, programs appear twice, as chaotic-aur and as cachyos.

Did you perform this command after kernel installation?

I still wonder, why are all kernels available in the new Guaruda Kernel Settings page but not this one? That settings page works great.

I have no idea, I don't use Garuda only vanilla Arch Linux and I've never liked GUI way.

I always select kernel at the boot in the GRUB and that's it.

I have no idea, I don't use Garuda only vanilla Arch Linux

This would explain why some of your advice in the forum is somewhat odd. Like this comment:

Nothing wrong with nano, but it isn't even installed by default on Garuda. micro is the default text editor.

I guess it makes sense that you are unfamiliar with Garuda's features, since you don't even run it.

Just curious: what is your motivation for participating in the forum?

I'm trying to install the kernel and I get execv: No such file or directory when running sudo pacman -S linux-cachyos linux-cachyos-headers. The initcpios are never created and thus the kernel cannot be loaded. Any ideas what might be going wrong?

Dang! I did it AGAIN: updatin' broke my system
next page →