Like the title said OBS doesnt record desktop audio and instead it uses the microphone twice. I tried reinstalling pipewire and switched to pulseaudio but neither seemed to work. I looked around the internet too but none of the fixes worked too.

i thought it was only me.

any solution or clue?

basically use the git wireplumber package

even when using wireplumber the issue persists

did you use the git version? i linked to an gitlab issue in that thread that is the same issue as yours and it was fixed in the latest git the stable package still doesn't have the fix I think. you can also apply the fix yourself by following my instructions in that thread i linked. reboot afterward and it should be working. if not you'll want to post on that gitlab issue to let the devs know that you're still having issues with that

Could be so nice and tell me what exactly to change. I don't want to screw my system again. In the thread all it says it's to remove a direction check and i have 0 idea what it is

I don't remember of the top of my head I just looked at what files where modifed for the merge request and edited the one on my system to match. It would probably be alot easier and safer to just install the git package like this
sudo pacman -S wireplumber-git

back when i was having the issue the fix still hadn't been merge so I had to do it by manually editing the file, now installing the git package should be enough to get that fix

seems like it isn't in the pacman version yet, even if i installed the git the direction check in findDefinedTarget() is still there. So you probably will still have to apply the fix manually.

Edit: nvm that just broke my audio, so i put it back @zany130 how did you edit it to get it working?

@zany130 how did you edit it to get it working?

@jurosic_park
@Carrot
I just edited my /usr/share/wireplumber/scripts/policy-node.lua
To look like how it does here policy-node: Remove direction check (!264) · Merge requests · PipeWire / wireplumber

EDIT: seems like the fix was actually reverted see

Its broken for me too..

You have to manually edit the file like i said or uninstall pipewire as OBS does not support pipewire and will not fix this(source Selecting an output device results in the app choosing an input instead. · Issue #5533 · obsproject/obs-studio · GitHub)
And wire plumber reverted the fix because they think the issue is on OBS not them

OBS does not support pipewire and will not fix this

Actually, to my knowledge, OBS is built with pipewire? I might be wrong tho.

Also thanks for the fix! But unfortunately it doesn't work, after applying the "patch" when i logged out and back in the desktop audio just recorded a perhaps 1/4 of a second static and then nothing and then static again, and after reboot, it just messed up my audio completely, so no audio devices were listed.

Anyone know when an actual fix will be in the wireplumber-git package?

Meanwhile, any other recording software?

EDIT 2: I'm thinking that using software such as JACK could solve this problem until a fix is made, because you could create a virtual Output, and reroute the actual output into it, so obs can record it, Also couldn't this be in any way be solved by using the "Pro Audio" in pavucontrol?

Anyone know when an actual fix will be in the wireplumber-git package?

Whenever the wireplumber maintainer pushes a fix to the master branch. The package will be updated about 1-2 hours after a new commit has happened

Actually, after looking a bunch on the OBS github issues, looks like, yes, obs supports only pulseaudio inputs as @zanny130 pointed out, pulseaudio outputs must be sinks, and that's where wireplumber/pipewire is going wrong(?), so would switching to pulseaudio fix this problem?

EDIT: Wild guess, but i found software named Helvum (Tom Wagner / Helvum · GitLab) I'm going to try this out, perhaps it could fix some issues? I'm going in completely blind though.

EDIT: Right! Helvum helped since you can manually route audio from a program, into the OBS Desktop INPUT, and "unroute the desktop INPUT from the audio card", so this would be a solution, until a fix is released, i hope this helps guys! Install it with pacman -S helvum, the only problem would be that there is no way to force, or save config, so every time you want to record audio from, for example, a game, you need to do the routing, and keep an eye on it to see if something reset or not. Still, better than nothing!

ANOTHER EDIT...: Actually, you can reroute the monitor of playback_FL and playback_FR into the OBS desktop audio, and have ALL desktop audio be recorded.. How OBS is supposed to do it, but isn't. 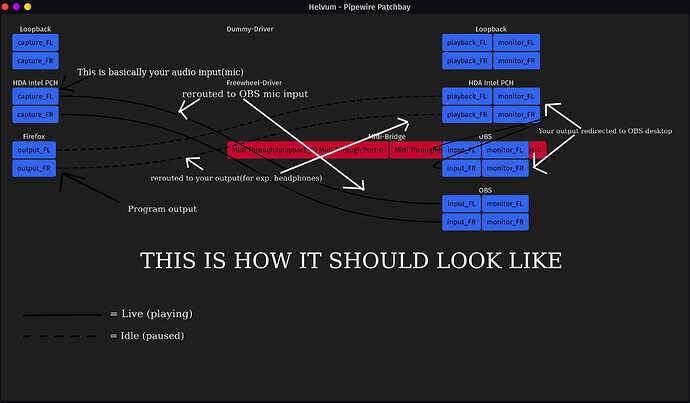 EDIT: according to the wire plumber devs apperently you need this fix to https://gitlab.freedesktop.org/pipewire/pipewire/-/commit/5ae75e1d2a08bbf7316c299eddbacf175617fee8 and everthing should work just tried it (with the pipewire git packages) after resteing the changes i did to my wireplumber files and everything works

wireplumber fixes didn't work for me, switching to pulse solved

you need the git version of all your installed pipewire packages for example:

on my system I had all those so i replaced them with the git version. really I think you only need pipewire-common-pulse-git but its prob not good to mix versions of the different pipewire packages

or switching to pulseaudio is a better solution if that works for you.
you can also

Yeah, so far im happy with this, as long as it works, im happy that it works, dont want to make stuff worse lmao