Which dependancy is necessary to get the default colored neofetch output from terminal?

So recently my neofetch got uninstalled somehow and I had nothing to do with it. So I had to reinstall neofetch however the version I have running just outputs the Garuda eagle and everything else in yellow as opposed to red and multiple colors before. I want that setup back. What dependancies does neofetch come preinstalled with?

As regards dependencies, I think you can check directly with either:

I use paleofetch only because it seems faster, but still have neofetch-git.
Some hints on configuration I think could be found here (but it is a very long thread):

I can't check because I don't have the old neofetch configs anymore.

To check the dependencies (dependant packages) you don't have to have the package installed.
I see you lost your configurations, so you'll have to do them from scratch, so I thought the link might help.
For sure someone using the neofetch can provide more information.

Thats kind of the problem. I have no idea what was being used. I assumed it was neofetch because the terminal would show you don't have neofetch installed as stated here.

Edit for calrification this is what I have now. I want the old stylized logo back. 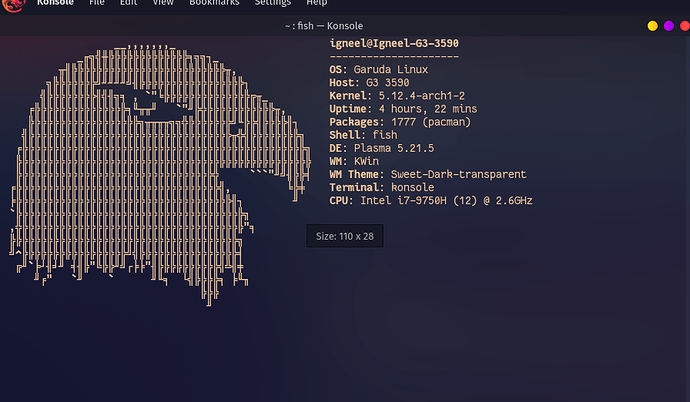 Ok I found out I was using paleofetch all this time instead of neofetch. Because I got the stylized garuda logo when I entered paleofetch in terminal. Do I just put it back into bash.rc to get it to show everytime on terminal?

Hmm this is interesting. Seems my fish config changed somehow. I opened up the config file and where the comment clearly says paleofetch I found neofetch instead.

Edit: While this is the solution I would still like someone to help me find out what happened during that update (post linked above) to prevent it again.

Desktop doesn't work properly after updating kernel
How to start Paleofetch automatically with terminal?
Dock panel and status bar does not show
system closed 22 May 2021 09:33 #8