hey, yesterday i updated garuda and shut my pc off, now i started it and i noticed the "window button" applet on the upper left corner changed it's appearance, previously it was like the actual window buttons of my installed theme (lyraP), shame is i don't know which packet is responsible for that, so for now i can't do something to change it, does someone know how i get back to the previous buttons? 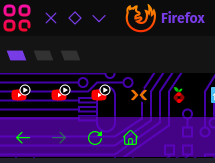 i did, tho i did not find anything, and from the age i'd say it's from last year, but i updated yesterday, and the update before that isn't that long ago, so it can't really be the version from that

You should sharpen your search skills:

Hello, since I started my computer today, my window buttons in the latte dock, are 'default' look. I tried to set the global theme to Sweetified plasma again, didn't work. I tried to configure the windows buttons, but the only option I have under decoration is 'breeze' garuda-inxi System: Kernel: 5.16.8-zen1-1-zen x86_64 bits: 64 compiler: gcc v: 11.1.0 parameters: BOOT_IMAGE=/@/boot/vmlinuz-linux-zen root=UUID=6f02cca7-346f-4cd7-8573-fa3f1c3a3cf3 rw [email protected] quiet splash rd.udev.lo…

i just found them under the link too, but that still won't explain why it was running fine yesterday

This occurs since the moment you update and upgrade to KDE 5.24, which was released yesterday at a certain point in time

which of the kde packets is responsible for that? i'd just reset to a previous build

I don't know the exact package, and I'm not supposed to. Even the widget maintainer hasn't probably figured out yet.
Check in your pacman log when you upgraded and see e.g. plasma-desktop-5.24.0-1 (there will be several other plasma and KDE packages) and restore the snapshot before that.
Anyway, in my opinion, does it really worth a restore? It is only a cosmetical aspect (but do as you prefer, of course! Just sayin').

It is an incompatibility with latte-dock and the latest plasma. It would probably be better to revert to a pre-update snapshot and not updating until it is fixed.

That being said, I think doing this to avoid breeze window buttons seems really extreme.

just restored an older backup, added latte-docks and plasma-desktop to the ignorepkg line within the pacman.conf file and started a update again, i hope after it is finished i won't need to revert it again, so for now, thank you^^

I think holding back plasma-desktop and letting the rest of the plasma packages update is a risky decision. That being said, I haven't tested it personally so I guess you can let us know how it turns out.

i'll do that, good thing timeshift lets me load a backup without having to actually start the OS, so worst case i got a restart more next time i start my pc

so far i had to add plasma-workspace to the list in order to even attempt a update, but other than that it seems to be working for now

The question is if holding back both packages because of 3 icons is really worth it. Personally, I have been living with this since I created the issue at the repo linked above - at first it was hell, even tried removing the buttons but that didn't feel right either. Eventually I accepted it for the time being. I'm quite sure psifidotos will fix it soon now that reports are getting out of control. But as you know, maintainers have a life too so be patient

This is getting beyond silly.

Update: Seems like the last update fixed the issue, also i would've edited the main message of this, but I am unable to do so, still thanks for the help

That is considered a partial update and a big no-no in the Arch Linux world. You will be inviting trouble down the road as you have a system with certain packages held back while the rest are updated regularly. You will produce untested configuration.

my point of view: i can restore my system without booting the os, if i do break something timeshift and a couple other things will handle it c: i think partial upgrades are still better than no updates, so i guess i'll stick to that

Well, goodluck. As you entered untested waters. Partial upgrades mean that you have a unique configuration, you are on your own. No other Garuda Linux user in this forum will try to replicate what you did to help you troubleshoot for a future problem that you may encounter.

This entire topic & thread seems silly at first blush. In my humble opinion, OP would be better off with a static distribution--an LTS Ubuntu-based distribution comes to mind--but this may also serve as an opportunity for others to watch the results of what not to do. People who are curious or who do not understand what the results can be from partial update scenarios should watch this thread. (Those with a droll sense of humor may want to watch for entertainment purposes.)

@ash3781, please keep us apprised of your system, and whether you needed to revert your withholdings, or any problems related to their "ignore." Those are some serious packages and what, an entire meta?