Weird slow internet on all of my home pcs

ok can you test with live usb ? just to rule out driver issues/network

I am back!
Interesting results
So on livecd, the speeds are FLUCTATING LIKE CRAZY
but
i am able to get the original speed of my wifi, it increases to 17-19mbps falls to 5 then increases and vice versa

And i got assigned the mirror which i always get on devices with working conditions. Which keps changing on my laptop with the issue

i got assigned the mirror

What is this about? What mirror?

Anyway, try with IPv6 disabled, to see any difference.

Ok sad new here,
I downloaded a file on my windows on the same pc and downloaded it at at original speeds, but I I stuck at 1mbps on garuda.

Petsam in speedtest by Oakla they have multiple server locations and they auto assign you one, since I got this wifi I have been only assigned a server in Lucknow, which isn't the case anymore. Even the ping show is 0ms in speedtesting The download speed is stable. 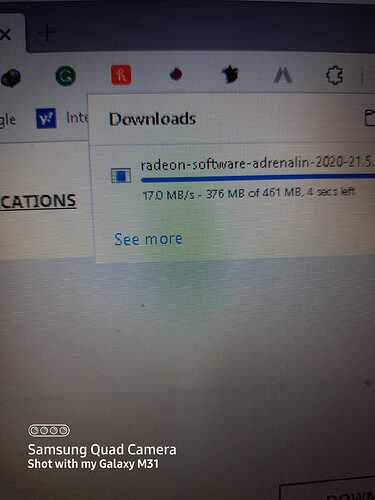 Ok it is safe to say your internet connection is ok

can you give output of iwconfig and ifconfig on garuda

they have multiple server locations and they auto assign you one,

Just for info, you can choose your server manually.

But it indicates a abormality, if all devices have been getting the same mirror for the past 2 months, why does one case have degraded performance and having different servers assigned and has 0ms ping

I think we are now talking about two seperate items here now?
Your Wan connection is ok You dont need to worry about speed test in this instants it is your wlan at fault.
you have only have 6mb/s on the 5ghz range?
have you changed anything in network manager/ drivers settings as liveusb works and other devices work?

Lice cd, doesn't "work" but it's able to get up to the speeds momnetareliy but keeps fluctuating, the livecd doesn't have stable speeds and the install doesn't have any speed.

did you test pinging 192.168.1.1 on the live usb to see if that fluctuated? As you have already proved your internet is ok? And speeds are fine

ok thats fine
So its not hardware.
As a suggestion try a different lts kernel

Also, you should disable mac address randomization(if not already).
And did you try live medium? Different kernels? Especially Linux-lts.

@regularCoder Did you solve it?

After trying linux and linux-lts, no joy

There are already a lot of suggestions on this thread. I apologize that I've duplicated some steps you've previously tested. As others looking to solve their speed issues will be reading this I've included all steps in my summary of fixes for speed issues others will need to be sure to test.

Here are some things you can try to address your wifi speed issue:

Firstly, as both your adapter drivers are contained in the kernel, your kernel in use can have a huge impact on your wifi performance.

I would suggest testing the following kernels with both affected computers:

I would leave wifi power saving disabled for the duration of all troubleshooting.

Be sure your BIOS is up to date.

I see you also have IPv6 listed in some of your outputs. I would disable IPv6 in your router configuration or via a kernel boot parameter for the duration of all all troubleshooting as well.

I don't know if you are using bluetooth devices on both your affected computers. I know some people feel they can't live without bluetooth, however it can drastically interfere with wifi performance. I would disable bluetooth for the duration of your wifi troubleshooting efforts as well on both affected computers. This is a known issue with the QCA9377 adapter you are using in one of your computers. Ensuring your wifi adapter only uses the 5GHz band may help with this issue.

In addition to generic fixes, you will likely need to test individual fixes tailored to your specific wifi adapter models in use.

You can test different options for your iwlwifi based adapter.

Create an an iwlwifi options configuration file at /etc/modprobe.d/iwlwifi.conf and test adding the following options to that file. The options can be tested individually (as below):

Or, in combination (such as):

You can test different iwlwifi driver options by adding any of the following lines to the iwlwifi configuration file /etc/modprobe.d/iwlwifi.conf(individually or, in combination):

Reboot after making any changes to the /etc/modprobe.d/iwlwifi.conf file.

To ensure you have the latest intel and atheros firmware issue the following commands:

You could also try downgrading the linux-firmware package if your slowdown coincided with that package being updated and your speeds dropping.

Intel has their share of issues, unfortunately your Atheros QCA9377 is even more predisposed to many problems with Linux. The QCA9377 adapter is known to often be affected with slow speeds. In some cases the following changes may help with speed issues with this adapter.

The above options may be tested individually or in combination.

Reboot after creating or changing options via the driver configuration file in /etc/modprobe.d.

Have you searched your logs for related errors?

You can use the following commands to help narrow down what might be causing your issue:

Please post the command outputs on the forum directly, rather than a private self destructing bin service. The reason being, is that as a future knowledge base missing information really degrades the usefulness of old posts as a reference source. I also find I don't have the motivation to follow a bunch of different links to logs scattered elsewhere. This tends to make me not too interested in trying to assist issues where it becomes too inconvenient to view the diagnostic info.

You really haven't given much information regarding exactly how your network is set up.

Be sure to test some different dns nameservers.

Just FYI, on some router hardware using cloudflare as a dns server can result in impaired speeds with certain Linux configurations.

Compare pinging via IP address and using the sites name:

You need to exclude dns as part of your speed issues.

I guess that's about enough suggestions for now.

So much effort. You brought tears into my eyes man.