System Does not Boot

Why so mysterious?
Was it the thread Computer doesn’t boot, boots to a black screen, or stops at a message ?

CTRL ALT F2 doesn't work. I came across that post first. There is another post on this topic that was where I got the info to fix the grub loader.

When I look at the reinstall option I don't know whether to select MBR or root.

Then I tried to reinstall or refresh the linux kernel headers I think. But the command that was shared in that post I think is old. It's using -Syu and it fails to do anything.

This information isn't specific enough to be useful. Instead of "I think I did this, whatever I did didn't work" you should copy and paste the exact commands and outputs into the thread so we can see what is happening.

Why don't you try restoring the latest working snapshot and then garuda-update again?

Sorry in a big rush today with the non-tech aspect of my life lol.
Okay this is the more detailed version:

When I turn on my laptop it makes it to the grub loader, counts down and then boots the operating system like normal. Then on the next screen its all black and it says:

My system hangs at this point and doesn't load any further.
This is something that happens with my system occasionally but powering off and powering back on usually corrects this. I think it's probably important to know that this has happened to me after a fresh install no dual booting or fancy settings like that but a clean fresh install and after a reboot the system hangs on this screen. Again this has corrected itself in the past by powering down and back on again.

The Things I've tried:
Paitence, I've tried to walk away and come back a while later to see if it's just taking it's sweet time or something.

I've read the article here: Computer doesn’t boot, boots to a black screen, or stops at a message

This article was posted above but I may be misunderstanding the instructions. It says:

The first thing to try

Switch to a text console with CTRL+ALT+F2, log in with your normal username and password, then run a full update:

I tried doing that at the screen it is hanging on

It doesn't do anything. I don't know when exactly to do that so that's an issue.

So I moved on from that article to this one:

A few days ago my pc has been unable to boot to OS. Its currently getting stuck on Loading Linux linux-zen Loading initial ramdisk Yesterday i was able to get into the OS by using a snapshot but that has sinse stopped working. Now im getting the following error when clicking on a snapshot. (below) Error: file '/@/boot/intel-ucode.img^/@/boot/initramfs-linux-zen.img' not found. (hopefully no typos as i had to type this myself) Does anyone have any ideas on how i can fix this? if anyone has a…

I followed this advice from that post:
The easier way to chroot is to boot into a Garuda live USB and do a grub repair from within Garuda Assistant. Then run grub-update.

If I needed to "Reinstall GRUB bootloader on ESP,MBR, or PBR(root)
I don't know which setting to select MBR, root, or ESP so I left it alone.

I probably am not understanding the instructions.

You may also want to reinstall the Zen kernel from the chroot:

But now that I'm thinking about it I'm not sure what it means by "from the chroot"
That's how far I've gotten and I need help because I don't exactly understand the instruction even though I have found them.

I'm not sure what it means by "from the chroot"

When you boot from live media, you don't have the normal system disks mounted. That means if you make a change (install or reinstall a package, for example) it only does it on the temporary live system you've set up. The chroot (change root) tool is a way of telling your system you want to run commands using a different system root.

An easy way to set it up is to use the chroot GUI tool (looks like this): 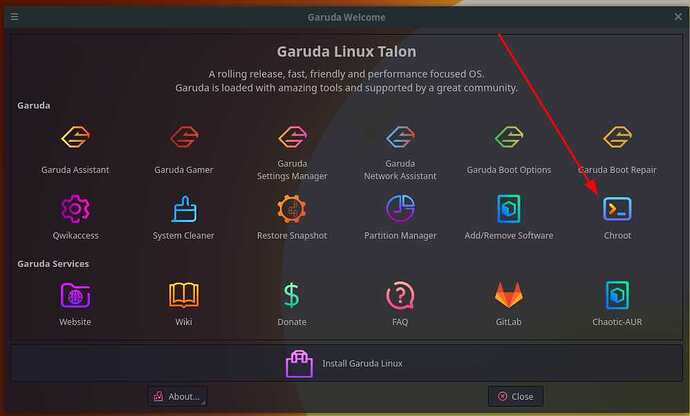 If that doesn't work, you'll have to use the manual instructions.

I don't know which setting to select MBR, root, or ESP so I left it alone.

I do not think you have an EFI partition, based on the fact that you are booted into legacy mode:

I am assuming you installed with this same media.

So, no EFI partition means try the MBR instructions.

Once you are inside the chroot, reinstalling Grub or the kernel will work on your normal system (not the temporary live media one). You will also be elevated to root, which is why sudo is missing from the commands you see listed in those threads.

Just a thought ?
Make sure fast boot and secure boot is disabled

Okay got a moment to look at this again.

First when I enter chroot as described above the terminal shows this:

I think it's working can you confirm?

Second I tried to run the Garuda Boot repair and it popped up an error message that said:

"Could not set up chroot environment. Please double-check the selected location."

It just throws an error.

After I post this I'm going to take a look at TilliDie's recommendation and look to see if I have fast boot and secure boot disable in the bios? That's in the bios right? lol.

Power cycled to check my bios and I don't have those options in my bios.
I thought I'd try again to boot into my system and it decided to let me in. So for now I'm back into my system. Can we continue to try to troubleshoot this as it happens here and there where I'm basically locked out of my system and that is no fun.

That's lucky you got back in. I would make sure you bring your system fully up to date while you have the chance.

It may be worthwhile to reinstall Grub as well.

I had the same thing happen to me

After tring different thing i ended up reinstalling but could not install with nvidia enabled so i installed with out nvidia and it working fine. even though i have a nvidia card i don't think i'm going to install there driver.
I was wondering if you by chance have installed there driver when you did the install? as it seamed to cause my problem. but it looks like you are using Intel onboard graphic if i'm reading your inxi right so you would not need it.

I’ll try to answer your question but I’m not sure I understand it exactly. When I initially loaded the iso I selected the option to “allow proprietary drivers.” It’s the default selection if I remember correctly.

@Rastin I think your issue is altogether unrelated. Typically reinstalling is unnecessary, but what's done is done.

For next time, if you take an update that breaks your system you should try to restore a snapshot from the Grub menu. Every time you update your system, a snapshot gets automatically created for you to preserve the system state as it was before the update.

If you need help getting the proper Nvidia driver installed, please open up a new thread and post your garuda inxi along with a description of what's going on.

Alright then, let's try this:

Looks good to me.