As someone who's still kinda new to Linux (started using it in February this year), I've made my fair share of mistakes and dumb stuff, but none comes even close to when I installed Garuda KDE a couple of days ago.

First install done, everything going smooth, and I decided to test my laptop's battry life with it, so I unplug my external monitor and used it for a couple of hours. When I plug it back in, nothing. No signal on the external monitor. I could swear to god I checked everything (but the "device" tab on screen settings). Spent half a day trying to figure it out, reinstalling the NVIDIA drivers and even reinstalled the entire OS before I realized the display was detected, just not active.

So, what about you, what are your stories of rookie mistakes you've done using and configuring your machine? 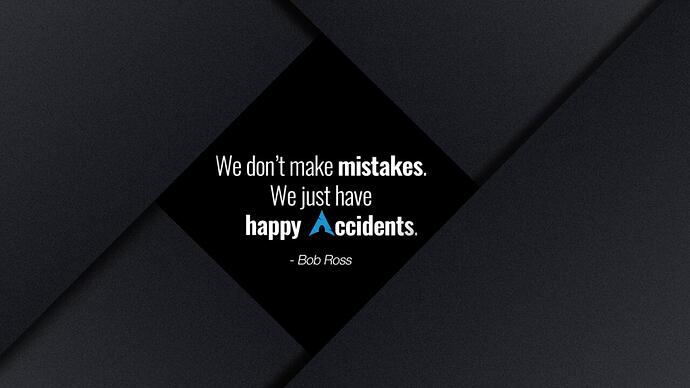 Let my wife try it before I had a chance to run a backup.

I spent seven years of my life contributing to a project and expected some sort of consideration in return. Rookie mistake, eh!

Bet I can guess which project. That said when I was first trying out linux various distros let you select most of your software before installing the distro. I didn't realize I was taking a chance of it not booting to the desktop if I chose the wrong combination of apps. Back then the OS's weren't that great at telling you if something is going to conflict.

I'm sure everyone who's used Linux has a "dd" story. Wiped 4TB of data by mistake one time. I didn't get too upset though, cause I always have my stuff backed up. Funny thing is I'm sure lsblk and the GUI had output a different /dev.

Live and learn. Should have followed my own advice that I always tell newbies, disconnect all your USB drives, (except the one you intend to nuke).

Wait till @c00ter tells you his doozies.

Amazingly enough, I haven't trashed anything with dd yet! Perhaps paranoia has its uses... I build the command in a text editor, and cut/paste the info into it from fdisk -l
, and double check a few times before cut/pasting the whole thing into the terminal

Been using dd for years and had yet to make a mistake yet. Read once, read twice and like you said, cross your fingers and press enter.

Well I guess that makes me the only one then?

Nope, you aren't alone.
Actually it happened to me also. I wipped my SSD, but it was new, and didn't had much data, only Garuda Linux iso, and a bit of gitlab stuff. So no serious problem, but it was my first and last time with dd

I use gnome-disk-utility for the purpose now. It is light weight (less than 10 mb) and easy to use.

Actually, what happened was I have 2 internal disk drives, sda -> old hard disk with my data and sdb -> new ssd.

I forgot that they were separate drives, and picked iso (it was old Linux iso file, Linux Mint 18.1, 32 bit one as I wanted to do some work on 32 bit)

And wrote in sdb. After it was written, I realized what had happened and that usb is sdc.

for me it was prob when I first started learning and instead of formatting a new partition I made I formatted my drive along with all my files.

These days that's taught me to actually have a decent backup strategy both on and offside.
for which I use Kbackup and Pcloud respectively

No dd issues here ever cause drive operations is still one thing no matter the OS I will always use GUI tools for. That said I have simply deleted the partitions and created new ones on both HDD's and SSD's instead of wiping or resetting and ended up with OS bleed through after I've installed a new OS.

I'm sure everyone who's used Linux has a "dd" story

That is somewhat true. Not too far in back in the past I wanted to write an iso to my thumb drive using dd and wrote it to /dev/sdb since that was the permanent location of the stick but this time it wasnt. So I dd'd to my SSD and had to reinstall

Still wondering why the 2 changed locations.

I realized the display was detected, just not active.

You got off easy. I mean, you lost a half-day, data intact (right?), maybe a little loss of face. But you learned something, right? Look, as a journeyman electrician in a former life, I made a bundle on service calls that were the result of unplugged devices. So don't feel too dumb--you didn't pay someone to "activate" your external monitor.

I have bricked killed a multitude of expensive devices starting with a large CRT monitor that made a loud Pop! when I set the scanline wrong, around the time the Linux kernel reached 1.0. That was in the mid-90s and the very first attempt I made at installing Linux. I had to hide my little Linux experiments from a frowning wife at that point.

Skip forward a couple years, and I brought down the whole Windows network for 3 days trying to make it a Linux/Windows network at my (own) company's business. I'm still not sure how that happened. I did not tell my wife about that booboo.

And I had this sweet, sweet little Compaq iPaq, an actual hand-held computer and I spent a small fortune buying all their peripherals. I almost cried when I bricked it attempting to flash Linux to it's ROM. It made an expensive paperweight. I should have known better by then, in the early 2000s.

Mid-2000s and I was full of myself because my, by then, local government employer let me run Linux on my computer, with Windows in a VM. I was the only employee, outside the IT geeks allowed to do so, probably because I was close friends with the operator that ran our Mailserver, also Linux. Like most large employers, our IT geeks backed-up all the individual network shares' data nightly, but I also did nightly backups of my one-of-a-kind office rig, both data and operating system(s). And then I found out all my backup tapes were infected with the same Windows virus that was running rampant throughout several network nodes, as was my Windows VM and my local data. Not my fault but still my fault, if you know what I mean.

I'm not going to speak on the irretrievable data--lengthy professional reports, photos, contact info, personal stuff--too much, really, lost "experimenting with Linux." I had to re-create some of the data, a long, drawn-out process, and that has taught me the importance of protecting my data, which I do in various, multiple ways.

Not Linux, but I did once try to make Windows fly--on a laptop--through an unopened 3rd floor window. It didn't--fly--and I had to pay for the window glass, and the laptop. There's just no winning an argument with some women.

I've since retired, and retired from destroying hardware other than an unhinged screen on a 2014 laptop, but it's still operable if I clamp down the screen. Linux operating systems come and go. I was exclusively Linux for years, but find I do like the latest versions of Windows 10 Pro on my 9th Gen desktop. I still run Linux-only on 3 laptops, all--somehow--Dells, and all Arch or Arch-based OSs. I like Arch, I guess.

So look at it this way, @joojmachine. You have many years ahead of you. Now get out there and destroy something!

P.S. I'm sure others have even worse stories.

I spent seven years of my life contributing to a project and expected some sort of consideration in return. Rookie mistake, eh!

Okay so I sorta rm d but not really. I was having issues with Timeshift with BTRFS on Manjaro back when it used /mnt/timeshift/backup instead of /run/timeshift/backup. Therefore, I didn't realize that this mount point was a virtual filesystem and I may or may not have... You know the rest!
Edit by SGS

Had my share of systemctl services I forgot to enable and spent hours wondering why its not working.

Someone tries it out and ...
none of us wants that

Had my share of systemctl services I forgot to enable and spent hours wondering why its not working.

Gee I know this story too well.