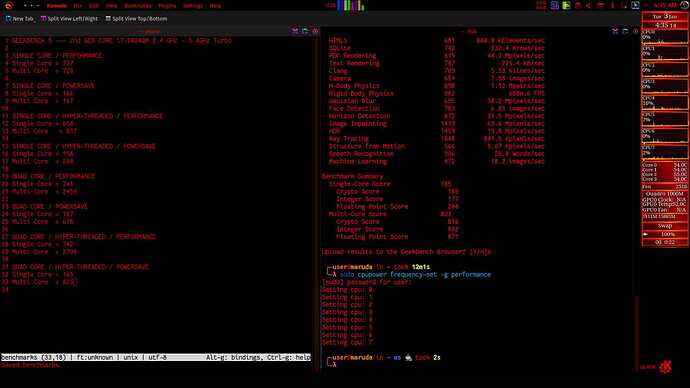 Whatsup everyone. When I run on battery, I usually disable Multi-Core Processing in the bios and just run with one hyper-threaded core with the Performance governor. I've been curious how the performance compares with, say, if I run all cores hyper-threaded but set to Powersave. So I ran some benchmarks and thought maybe some of you would find it interesting as well. The result may say that the performance is about equal, or slightly better with all cores set to powersave, but I still think I'd rather have 1 core working fast than 4 cores working slow.

First my inxi because it's relevant.

And here are the results.

Why? To me it makes as much sense as breaking 3 legs of a horse and then expecting the remaining 1 to do the work of all 4 just walking.

Because having many cores means your processor can do many things at once. Having a high clock speed means doing something faster. I don't run many things that can use more than 1 thread when I'm on battery anyway, and having the the extra cores running is just wasted battery, especially since they are crippled and running at 800MHz because of a governor. With just 1 processor running at up to 3.4GHz, and hyper-threaded to work to work like a dual core, I can have full performance as long as I don't do something that slams all threads at once, and even if I do, that one core will give it's all.

I recently helped a guy in here with a 6 core, hyper-threaded,very fast cpu and some nvidia gpu who was complaining that his game was lagging badly in Garuda but not in Ubuntu. I noticed in his inxi that he had his badass cpu throttled by the powersave governor and topping out at only 1GHz. It doesn't matter how many cores you have when most things only use 1 thread. What matters is the speed.

Nvidia video card on minecraft works worst than integrated one, I think is the nvidia driver that doesn't work properly. The os before using Garuda was Kubuntu and there drivers worked. I tried to configure the system reading the online forums, but I didn't manage to fix it. Thank you for help. System: Kernel: 5.15.38-1-lts arch: x86_64 bits: 64 compiler: gcc v: 12.1.0 parameters: BOOT_IMAGE=/@/boot/vmlinuz-linux-lts root=UUID=a715693c-beb0-4b88-870f-4885fc8edc10 rw rootflags=subvol=…

I don't run many things that can use more than 1 thread when I'm on battery anyway, and having the the extra cores running is just wasted battery,

If that is your entire goal, I can kind of understand it, Dave. I've known you for a few years and sometimes you do do edge-cases well. But, other than battery life, why would you want to cripple a 2nd Gen Intel CPU?

But, other than battery life, why would you want to cripple a 2nd Gen Intel CPU?

I wouldn't. Okay, look. I had a Thinkpad W520 that I loved but it would die on battery. I searched it and found that many of them die on battery because the CPU draws more power than the battery can supply. That's when I learned to shut down 3 cores in the bios and suddenly I could use it on battery, but my battery health was very low and it would still die in less than an hour. Well, I broke the 2 bottom bays (the hard drive and ram bays) by tightening the screws too tight and while looking for new covers on eBay I saw a W520 with a fried motherboard but in good cosmetic shape on auction for $20. I never bid on auctions before, but tried it and won. I get the laptop here in hopes that the guy just didn't know how to reset it (pull the battery and hold the power button for like 20 seconds), and before I even turn it on I do a reset. I never saw it mess up. It immediately booted fine. Apparently it messed up years ago and then sat in someone's closet for years. The battery is at 79% health and this one doesn't die on either battery, even with all cores running. But, because of the trouble with my other W520, I had been experimenting with powersaving techniques, and running one core at full speed is not very different from from running 4 cores at full speed. Running 4 cores at 800MHz, however, is very different than running 4 cores at full speed. So that's how I got my interest in powersaving...it was a necessity. As to other reasons I might want to cripple my badass CPU...well I did cripple it to make a video once.... 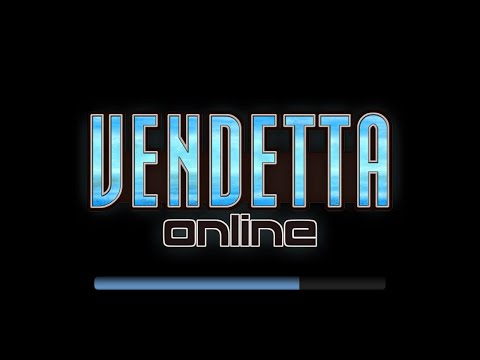 To make you wonder.

But certainly, it can't be generalized.

Also, many times, benchmarks can be misleading indeed. For example, here

The geekbench may measure the performance of just 1 core, very true. But the other 3 cores are still performing their tasks in background, and hence draw their share of power. Whereas. here

The other 3 cores do not consume power at all. So, all the power is given to that single core only.

But bear in mind, in this case, all the tasks are performed by this single core as well.
That can, in real life scenarios, indeed reduce the performance, because as you might know, CPU uses kind of Priority based scheduling. Also, games and normal user applications are executed on least priority ( 20 in unix iirc )

So, suppose, while you are playing the game, there is some interrupt. It will halt your game momentarily and CPU will start executing the other task immediately.

The fps may suddenly drop sharply due to this. It may even halt the game momentarily. if, you say, open other application in background.
This is much less likely to happen in multicore cpu though.

Also, this can happen very frequently, but modern processor are very fast, and can easily withstand such things. Because even 1 GHz is executing instruction in nanosecond. So, fps drop may or may not be even noticeable for small OS related tasks.

All in all, I would say if it saves considerable amount of power, like > 20% power, without much fps drops, you should go for it, otherwise, I guess it is not worthy enough.

Also, many times, benchmarks can be misleading indeed.

That's what I thought with these results since it seems to perform so much better with just one core set to "Performance" or even "Schedutil" than on "8 Cores" (virtual) set to "Powersave," and that's kind of why I posted. But, after more consideration, I think if you consider the most significant results for my use case, the benchmark actually does reveal my findings. Those results are these.

Since most programs use only one thread, it's the single core score that is most significant for a computer that is not doing heavy, CPU intensive multitasking (and who does heavy multitasking while trying to save battery), or running a program like aircrack-ng that slams all available cores at once. This test will change the way I look at benchmark results forever because before I always considered the multicore score as most relevant since we usually run with multi cores. Now I see clearly that that's not necessarily the case.

Nice to see you back on the forum Dave, and a healthy & happy new year to you.

Thank you very much for noticing @tbg . I've been 4 months in jail and it sure is nice to be back. Happy New Year to you as well.

Did they release you because the jail was too full, or did you break out.

Cuz I ate too much.

Ouch, did you get a bowell obstruction.

I'll bet he was in Powersave mode.

Hey guys.....Here's something interesting. My Garuda survived an update after over 4 months.

The garuda-update script helps considerably. Even going six months should be doable, but you definitely need to have experience on an Arch system to wade through all the big changes.

There's a garuda-update script? I'm just kidding. I think I did use it after the 4 months, but I rarely use it honestly. I have to use a proxy and I haven't figured out how to make it work with a proxy. I think I'll have a closer look at it soon. I do always use it after a fresh install.