Did you perform this command after kernel installation?

I still wonder, why are all kernels available in the new Guaruda Kernel Settings page but not this one? That settings page works great.

I have no idea, I don't use Garuda only vanilla Arch Linux and I've never liked GUI way.

I always select kernel at the boot in the GRUB and that's it.

I have no idea, I don't use Garuda only vanilla Arch Linux

This would explain why some of your advice in the forum is somewhat odd. Like this comment:

Nothing wrong with nano, but it isn't even installed by default on Garuda. micro is the default text editor.

I guess it makes sense that you are unfamiliar with Garuda's features, since you don't even run it.

Just curious: what is your motivation for participating in the forum?

I'm trying to install the kernel and I get execv: No such file or directory when running sudo pacman -S linux-cachyos linux-cachyos-headers. The initcpios are never created and thus the kernel cannot be loaded. Any ideas what might be going wrong?

Okay, let me explain that:

I used Garuda a long time ago.

Garuda was my next distro after Manjaro, and I've met skilled people on this forum. Garuda is also good and more stable than Manjaro. After all I left Garuda and start using Arch Linux.

Well, I know Garuda is sometimes linked with performance and gaming, and our Arch repo has the goal of maximizing performance much as possible, so I wrote this article.

I always create guides designed to work with vanilla Arch Linux - I try to be minimalist as possible to maximize compatibility with another Arch-based OS.
I don't see the reason why commands from Arch Linux shouldn't work with Garuda Linux, it's an Arch-based distro.

I hope it doesn't sound offensive. I was trying to explain.

Maybe you need to refresh the repo.

Let me know if that helps or not.

Hmm, interesting discovery. Nobody around me is using the WPS Office on Linux.

Does WPS from AUR works, or also doesn't works?

I appreciate the thorough explanation! That more than satisfies my curiosity; I mostly found it puzzling that someone would create an account and join the discussion without using the distribution in the first place.

The fact that you continue to hang out with us even after you've stopped running Garuda is perhaps testament to how great the community is!

So it's a little bit odd to write me this:

even installed by default on Garuda. micro is the default text editor.

If you have a package X pre-installed as the default option, does it mean everyone must use that package X?

Not at all. Everyone is more than welcome to use whatever they like. You don't need a reason to use or not use a software; it is your freedom to choose what you prefer.

When dispensing advice in the forum however, it is useful to recommend the defaults because we know everyone has them installed. Especially in the case of a new user, it can be confusing or frustrating when people are suggesting they run commands that don't work because they don't have the right package installed.

Nobody knows, when an issue or bug appears in the GUI or when we need to do something impossible through GUI and CLI, the terminal is the only way to do it.

I know what you mean. The GUI can obscure away from us the finer mechanisms of a program, sometimes making it (ironically) more difficult to interact with.

I hope it doesn't sound offensive.

Not at all. I hope my question did not cause you offense or come off as accusatory. As far as i am concerned, anyone that is here to help is more than welcome.

It looks like the referenced script installs the cachyos repos above all the other repos.

The order of the repos matters; in the case of a package being available from more than one source, whatever is on top wins.

I wonder if you would have better luck with your Chaotic packages if you moved the cachyos repos down below the Chaotic repo?

I was happy to satisfy your curiosity.

Not at all. Everyone is more than welcome to use whatever they like. You don't need a reason to use or not use a software; it is your freedom to choose what you prefer.

When dispensing advice in the forum however, it is useful to recommend the defaults because we know everyone has them installed. Especially in the case of a new user, it can be confusing or frustrating when people are suggesting they run commands that don't work because they don't have the right package installed.

Well, this is a hard part to don't sound rude or wrong.

This is not Windows and we as experienced users of Linux should learn the new users. Linux will be hard, and it will be sometimes really annoying. Even I sometimes just rage when something goes wrong, but hey... yeah or I can jump to the Windows again...

It makes no sense to force vim on beginners. The requirements here are already high enough, even if some Garuda tools make it easier to get started.

Advanced users can use whatever they want.

Please keep in mind, even though Garuda is Arch based, we have our own philosophy, just like the other OS mentioned above.

So you're the one who wrote nvidia-all? That really just saved my life.

Just tried the GuC / HuC firmware and Framebuffer compression guide. I don't know if it's just my impression, but the system does seem a lot faster! A lot more than I'd expect. Combined with these repos (when I try again), that will really be like a full CPU upgrade.

I recommend reading this: Firmware | 01.org

It describes why your Intel CPU works much better right now.

And nvidia-all not my work, only a guide for it.

When I used Garuda one year ago, I must help myself, for example:

I installed fresh Garuda some days ago, everything is smooth, apps open immediately, but after while I have OS much slower. I saw big HDD performance drop after 4 snapshots! Garuda performance/stability issues: some comments and suggestions I tried this: sudo btrfs quota disable / But after while it turn on automatically and my Garuda again slower and slower... So I don't want automatic snapshots. How to do it? I want to permanently disable. sudo btrfs quota disable / I want to turn of…

Hello i switched from Manjaro, everything is better, but i can't run games with custom protons. I don't know why, only original versions Steam proton works. It stuck on loading.

No one gives me a great solution.

Or MHWD sometimes refused to install Nvidia drivers correctly, and games won't start.
So that's why I ended up with this opinion. If you are using Arch-based distribution, users, after a while, end up on Arch Wiki and must face the true nature of Arch Linux.

Sorry if I sound rude or something like that. I just did this experience.

That's a CPU from 2008. I don't think anything older should be called, like legacy repo.

I have my own guide for it. 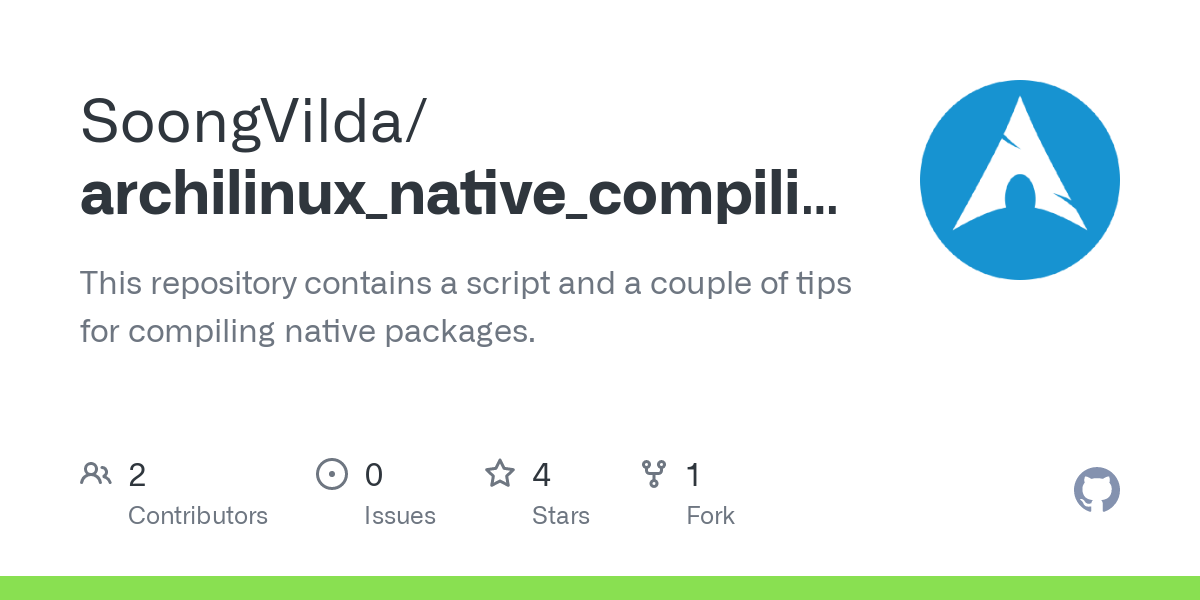 GitHub - SoongVilda/archilinux_native_compiling: This repository contains a...

You just need to adjust the file in the /etc/makepkg.conf

You should find this:

And edit that to this:

You can also manually define your CPU, but you first need to know your architecture:

For example, my output is tigerlake, that's why my config file looks like this:

Anyway, my script can just grab any PKGBUILD from the repo and then build for your CPU.