TL;DR: Is there or could there be a simple method to install multiple instances of Garuda Linux with encryption side by side on the same system (ideally done using the graphical installer)?

I am interested in an approach that minimizes customization and complexity, but that results in both systems being encrypted, with BTRFS, and snapshots.

I've searched and read most topics on dual booting on the forum, and most relate to dual booting Windows and Garuda, very few touch on encryption specifically.

What I am specifically interested in is a multi boot, all linux, encrypted system. For starters dual booting two flavors of Garuda but if it didn't increase complexity too much, it would be nice to have the option of easily installing other linux Distro's as well.

If setting encryption is within your wheelhouse, then multiple installations should be easy enough. As quick hints on what to look for/at. I suggest setting your partitions before hand - and after installation I would disable os-prober in grub, and use rEFInd to select between them. I doubt there would be direct support here for that setup, though - too many troubles and too few shooters!

It should be easy enough to find 'tutorials' on the subject - I can think of a few of them off the top of my head. I just don't bother with encryption anymore - too old to do anything worth hiding! Lots of multi-boots though...

I doubt there would be direct support here for that setup, though - too many troubles and too few shooters!

I just can't get rid of the feeling that you are sponsored by rEFInd.

I have nothing against rEFInd but at the moment it doesn't work perfectly with Garuda Linux and its philosophy of getting the system working again after a faulty update.

Since you can't keep anything secret any more and I have nothing to hide, encryption is unnecessary for me.

Since you can't keep anything secret any more and I have nothing to hide, encryption is unnecessary for me 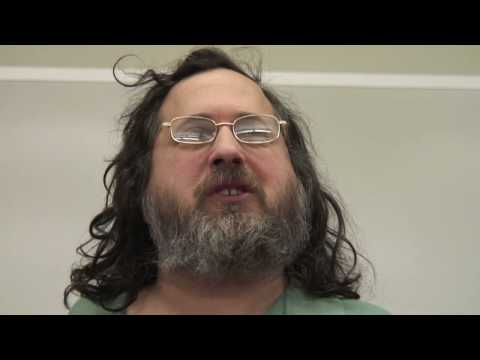 could there be a simple method

Use Garuda ISO to install what you think and if you fail, report your issues.

I just can't get rid of the feeling that you are sponsored by rEFInd.

Not really - but after I made a wiki or 2 about rEFInd over on EndeavourOS, I have been quite deep into the docs, and have used it for 'solutions' to a lot of boot problems. One of its best tricks is letting you use 'blindfolded' grub setups for different systems together - letting each one use its own 'special features' or tweaks, without having them fail to work together. (Lots of distros don't have a grub setup that can work with Arch-based systems). Besides, with a little work rEFInd can look good too (borrow an SGS background, and use an SGS logo for Garuda, for instance!

Oh - and it does work perfectly with Garuda - IF you have it startup Garuda's grub (with os-prober disabled). I have 2 Garuda setups (on different filesystems) on here, and both are booted fine.

Booting the OS from anywhere is no problem, grub can do that too

I dont know if thats irony or not 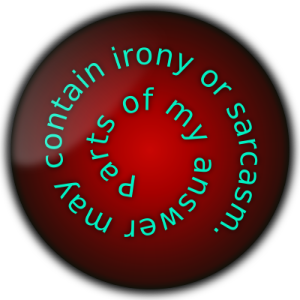 That is exactly the point - select the entry in rEFInd that starts up grubx64.efi rather than the entry for vmlinuz-linux. That way the custom grub that Garuda built handles all the timeshift/snapshot stuff for you - without having to put up with grub for anything else. I'll post a screenshot that shows the difference shortly... 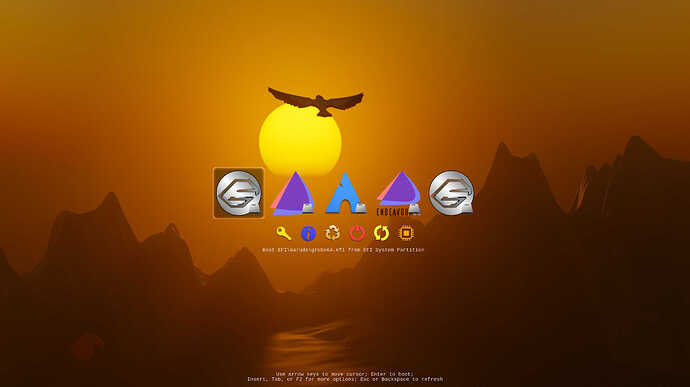 gar06-r2458×1382 86.3 KB
Anyway - quite a few distros do 'custom' things with their grub, and many do not handle other distros properly (especially Arch-based). So - the rEFInd answer is: (you will note text under the chosen icon - will boot using grubx64.efi, handling the snapshots etc without confusion. 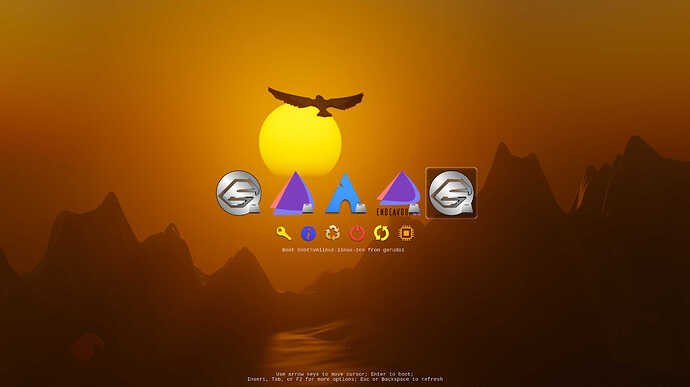 Some people use this to handle disparate systems without drama/tricks. For instance one person I know uses this to mix encrypted systems with unencrypted ones...

And, as I mentioned - it can make things look good, too

BTW - the other systems are on a variety of filesystems (f2fs, xfs) and all of them point to a ZFS data system.

Garuda is not on btrfs, so no need (or use) for grub.

My question was a different one so it's not going the Garuda way after all.

Not sure which question, then! Anyway, I'm a bit (!) lazy - so the least work that I know of is the way I usually go (and grub is usually WAY too much work on a multi-boot).

Not sure which question, then!

There is nothing to "setup". Just boot grub from rEFInd menu. It boots "normal" grub menu, which includes the snapshots menu.

Until now, I was of the opinion that refind replaces Grub, which it does not do here.

So why don't we/ I use it yet?
I had asked so many times how it works and studied the instructions but there was never such a clear answer.

So it's not just refind at work here, but on top, so to speak.
Similar to my custom.cfg with which I can also call all grub in which the snapshots are, or should be, because in grub on sdb snapshots the snapshots of sda are displayed.

So I can use "my" system of boot, no refind needed.

From the rEFInd page, it does look quite attractive in it's features and operation, no?

(sorry - been lurking and learning

I find this topic fascinating, mostly because when I first installed Garuda weeks back I had also left an empty partition for another linux at some point in the future.

I knew things had to be different to get the timeshift items in the list, but I hadn't made the leap to what that would mean for installing some other grub distro. I know I need to do some deeper research before installing something else if I decide to do that later.

Maybe I just won't ever get to something else, I wasn't expecting Garuda to be able to handle everything I wanted it to do originally, lately I have been thinking of just increasing my Garuda partition to take that extra space I had set aside.

I replaced an Ubuntu Studio and a Debian based rolling release distro (Makulu Linux) with Garuda when I started using Garuda. I had considered I might still want a New version of Ubuntu Studio or possibly the Garuda Audio Recording distro, but I was able to get everything working directly on dr460nized so far.

I have an UEFI boot layer before getting to grub too, but I haven't needed another layer like rEFInd to manage it so far. I just use efibootmgr to remove old entries or to change order as needed. I do have a windows install, although I don't think I've used it since installing Garuda other that to make sure it worked.

I had Garuda Linux twice on the second hard drive. One to improve and beautify, the other to experiment.

Thanks to the makers of GL, the forum and the team.

in comparison to what?

Let me rephrase, I'm not yet an advanced user, so I operate on the principle that the less I change/modify, and the simpler and closer to default I can keep things, the better off I will be when it comes to not breaking things and to troubleshooting. I think this is especially true when it comes to things like encryption and the boot process. And even more true with Garuda which makes some adventurous desing choices (which is what led me here, but that I don't full understand).

That is why I am asking for guidance / input from the Dev's or those more familiar with Garuda. I'm not confident that the general methods I've used in the past wouldn't conflict with some feature or part of Garuda (grub snapshots, btrfs, etc).

So what I am asking for is some direction on the simplest or cleanest method to dual boot two linux instances on the same system with encryption.

For a single instance, the graphical installer makes it dead simple to accomplish what I want out of the box (BTRFS + Encryption + Snapshots). My goal is to make the minimum amount of modifications necessary to accomplish this in a dual boot context.

Not specific to Garuda, but yes, many times in the past. Usually I just look for a guide that meets my needs, most are some variation of LUKS+LVM, most recently I was trying to figure out Encryption+BTRFS+Snapshots which was realistically a bit over my head, I was following the guides written by Willi Mutschler which were a bit over my head

Use Garuda ISO to install what you think and if you fail, report your issues.

And installing both systems using the graphical installer as normal (with the exception of separate unencrypted /boot partitions) choosing /boot/efi as the bootloader location for both systems. This (probably predictably) didn't work after the install of the second system I could no longer see or boot into the first (I assume I overwrote the bootloader).

My guess is I needed to do something differently with the Bootloaders. I'm also not sure whether separate unencrypted /boot partitions are necessary or even beneficial?

My guess is I needed to do something differently with the Bootloaders. I'm also not sure whether separate unencrypted /boot partitions are necessary or even beneficial?

Do you see how simpler it is to ask a real specific question, than theoretic general philosophies?

Here you are:
With Calamares AI (stupid, as you see), efi grub is installed with the same folder name always. So, if you don't fix something manually, the 2nd installation will overwrite the 1st grub bootloader.
To overcome this dumb AI design, boot into the 1st installation (before 2nd install), re-install grub efi manually (command line), assigning a different name for efi folder (using grub-install ... --bootloader-id=garuda2 ... or whatever name for ID).
Install the 2nd one, which will get the default folder name, but will also set 2nd installation as 1st boot entry.
Then you have only to deal with UEFI/BIOS entries' priorities and a way (for your explicit complicated setup) to of booting to a different system. One way is to use one Garuda grub, which can boot both (using os-prober). Of course it might help if you set grub distributor grub parameter to specific names, so you can easily distinguish systems. Using two systems randomly will eventually bring you in some boot problems, but you seem capable enough to deal with them.

Clarity of my advise was not good, on purpose. I think you are trolling.

'm not yet an advanced user

I would start from shallow waters first, then ask for deeper water.
So, either you are trolling, or you are stupid relentless idiot psychotic a strange personality...