Is windows in different drive supported?

I never imagined i have to go back to windows anymore. it's been around 6 months with garuda, i don't want to leave garuda. But as far as i know Dual boot is not supported.
I have garuda in my SSD. Can I install windows in my HDD? Is there any risk or something?

I would suggest to install Windows to different hdd/SSD, both bootloaders (Windows and Grub) in their own disk. So you would choose the boot drive with motherboard's boot selector key during start-up.

That's the safest way and is the way, I use two different operating systems.

I agree, this is the safest way.

A common point of frustration with this method is that when each drive has its own EFI partition, grub does not typically handle booting between them interchangeably. You can either switch between them in the BIOS, as MSuomi mentioned, or you can install something like the rEFInd boot manager.

rEFInd is very flexible and can boot to pretty much anything, as long as it is on an EFI partition. I happen to like it for other reasons as well, but it is perfect for this kind of boot setup.

Can I install windows in my HDD?

You are free to do whatever you want with your own system. The point about dual boot not being "officially supported" is that it is complicated and error prone, and Windows does not play well with others, hence if you have a problem other people are unlikely to be able to help.

when each drive has its own EFI partition, grub does not typically handle booting between them interchangeably. You can either switch between them in the BIOS

Not to my knowledge. Can you provide any source of this info?
AFAIK grub can see all connected drives' systems.
Unless you mean with os-prober disabled.

My own meandering experience is the only source I have for this information and there could very well be a way around it that I have not discovered. Long ago I had a Fedora install one one drive and an OpenSUSE on a second drive (with two separate EFI partitions and two grubs) and each grub could only boot to its respective disk.

I did some moderate troubleshooting and started a thread on the Fedora forum to get some advice, but couldn't quite get it working correctly. It was suggested I could merge the two EFI partitions into one and that might do it, but instead I wound up installing rEFInd and have never looked back.

At this point I can boot into any one of ten or eleven distros with all different kinds of boot loaders (grub, systemd boot, elilo, even just an EFI stub) and it works just great so I doubt I'll ever go back to just straight grub. Plus it looks nice: 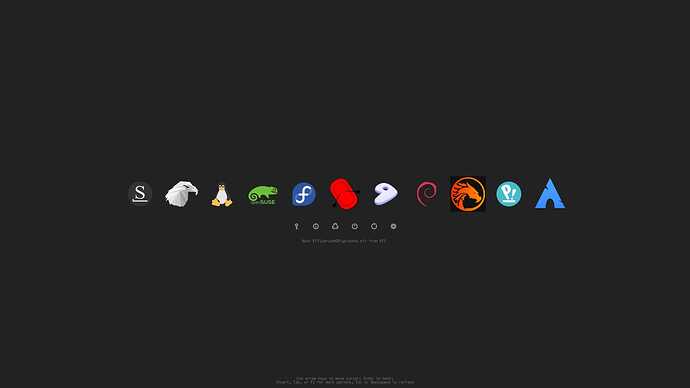 I don't actually go to the bios, most (though not all) motherboards have a key during boot, which lets one choose the boot drive "on the fly"...

rEFind looks interesting! I have to check it out

Bit OT, but how in the hell do you have so many Linux distros on one machine?

There is a 1TB nvme with twelve 80GB partitions carved out for slapping a distro on the metal if I want to check it out. Mostly just to tinker, try something new, learn/explore. Sometimes I'll install them and use them for a while, but lose interest and stop maintaining them (my Slackware is currently a little bit broken for example, and Gentoo has gone to seed as well) and it'll just sit there until I put something else on that partition.

I have a second drive where I sym link my home folder, and Vivaldi syncs all my settings and tabs, so no matter what distro I fire up I can get all my stuff and keep doing whatever I'm doing.

The weird stuff I do on my computer is definitely not supported.

There is a 1TB nvme with twelve 80GB partitions carved out for slapping a distro on the metal if I want to check it out. Mostly just to tinker, try something new, learn/explore.

My return to Linux happened, basically because I was bored and wanted to tinker with something

Sorry, if this goes to off-topic... I will stop now

Ahhh, it might explain. That had nothing to do with separate disks. Fedora grub is modified and lvm could also take some part for the issue.
One other possible factor is UEFI firmware implementation from MB vendor.
Just for info. Grub is nicer than you thought, although rEFInd is awesome, as long as you don't use Legacy/BIOS.

Wow, I had no idea that was not normal behavior. This whole time I thought that was just a baked-in limitation of grub--I did not realize Fedora runs some kind of hacked grub. I've been telling people grub doesn't work with two EFI partitions!

That explains why SGS gave me the hairy eyeball when I mentioned this previously, on this post: Bootloader instalation error - #17 by BluishHumility

I've done this on two systems and had no issue... specific use case being Windows was installed FIRST; then Linux. I just set my bios boot order to default to the Garuda install bootloader and it detected Windows on the other drive fine. You just have to use same mode (if Windows is installed using MBR it won't work, but if it's also an EFI install it's no issue) Garuda/grub will list Windows as a boot option in its list properly. You can also still change bios to default back to just boot Windows normally.

NOTE: Windows 10 will sometimes (and has on me once already) take over and eliminate your Garuda bootloader so be ready to fix that when it comes up. In my case the last big Windows 10 update cycle did that. As someone else said, Windows does not like to play nice with other installs anymore vs the old days when it could care less what else you had booting up.

Experience will vary, dual booting has a risk to it for sure. (why it isn't officially supported with Garuda I imagine.. but again short of Windows taking it over on occasion I've had no issues)

EDIT: Oh and no issue on a third dual boot system either, but it's all on one drive. (two above had different drive for Windows / Linux)