[Intervention potentially required] Python 3.10 and you

Whenever python gets a "minor" update, rebuilds in the Arch Linux and Garuda Linux repositories are necessary to allow software depending on python to continue working.

For Arch Linux packages, this usually works flawlessly, but Garuda Linux packages have a slight delay before they can be rebuilt. These rebuilds have now finished (since yesterday) and can be taken advantage of by updating via the update or garuda-update command. pacman -Syu won't be sufficient in this case.

For your own local/AUR packages, you will have to use a tool like rebuild-detector to detect needed rebuilds. You can then do these rebuilds with makepkg or your AUR helper of choice.

That should be it! Of course, let us know if you find any packages that have slipped through our rebuilds!

Just in case someone else stumbles over the same problem.
With update i got the following error: python-py3nvml: signature from "Nico Jensch (Chaotic-AUR) <[email protected]>" is invalid
After updating the keyring with pacman -Sy chaotic-keyring update went flawless.

That was most likely because you still had old packages cached. After removing them it will work. This situation has been addressed in garuda-update now as well.

Hi thanks for the info bricked my pc a couple times yesterday but now it works mostly but optimus manager still isnt working. it gets shown in task bar but when i want to use it its says i should enable/start it with systemctl but when i try i doesnt work any tips?

Thanks a lot, sorry if that was a dumb question

I update mostly via this button, that should work too, right? 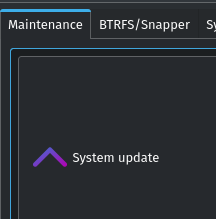 i get this error while running garuda-update

Did you install things via npm? That can of course cause issues as Pacman doesn't track those applications/files.

no i just ran garuda-update

Ever since the 3.10 update obs doesn't work and i'm not really sure if there is anything I can do besides wait for an update to the package.
obs: error while loading shared libraries: libpython3.9.so.1.0: cannot open shared object file: No such file or directory

Have you updated it recently?
I see the last version was updated on 12/12 exactly for that reason:
https://archlinux.org/packages/community/x86_64/obs-studio/

I get warnings about dependency cycles:

Can I update without breaking anything?

This term does not mean what you think it means, and that can be a bit confusing.

P.S. Here, let me give you a real-world example: In 2003(?) I bought a Compaq iPaq, a handheld computer. It ran some OS I don't remember, and I wanted to run Linux on it. But in order to do so, I had to flash the BIOS to one that would allow/install Linux.

Long story short, I messed it up, thereby rendering it inoperable by any means at software and hardware levels. Not without replacing some proprietary hardware innards. That turned it into an expensive door stop, or "brick."

When something, usually me, screws the pooch on an operating system--just software--it usually means I did some dumb shit, and I'm just an "idiot." The hardware was not harmed.

Thanks, I installed Garuda a few weeks ago on my laptop and I like it a lot.

Can you set your avatar?
Maybe I can then remember you

System borked after garuda-update. Can only access tty via ctrl alt f2 after reboot. Attempted to - Syu Optimus-manager. Get an error "failed to synchronize all databases (unable to lock database)