I am looking forward to move to Garuda Linux from Manjaro.
I am an intermediate Linux user. Using it from 3 years now.
My Desktop Environment of choice is Gnome.
I use an Asus gaming laptop which has:
Intel 9750H
Nvidia 1650
16 GB RAM
WD SN850 500GB SSD
Don't need Anbox Box support in kernel

I have a few questions.

Hello everybody, Following the release of GCC11 in ArchLinux's core repository, the idea now is to follow the official ArchLinux's project trend and have everything optimized for "x86-64-v3" or falling back to the "v1". As the first move, we're now dropping all "architecture-specific" packages of the beloved "linux-tkg". You'll find in the repo either the generic one (e.g: "linux-tkg-bmq"), and a v3-optimized one (e.g: "linux-tkg-bmq-generic_v3"). Thanks to that PDS and CFS builds are back! N…

I see that there a few extra kernels available without the needing to compile them. Although I am not a gamer, I still appreciate some extra performance. I was fascinated by the cacule kernel on xanmod(now called tt kernel). Should I use these kernels from Chaotic AUR? Can someone please post an explanation of these kernels and what they are good at?(Bmq vs cfs vs pds) I would like to avoid any kernel that is desktop focused because my laptop fans would kick in everytime I use my computer.

Is the zen kernel bad for laptops?

Is ungoogled chromium present in the repos or chaotic AUR. If yes then is it well-maintained?

Should I use these kernels from Chaotic AUR?

That's up to you. Zen works well for most people, the others are mainly a niche for people who like to get an extra 0.5% in certain situations.

That's up to you. Zen works well for most people, the others are mainly a niche for people who like to get an extra 0.5% in certain situations.

I don't require Anbox support in the kernel and i am not a gamer. Is the tkg kernel just for gamers or for desktop users only?

I assume the zen kernel is better suited for arch and is probably better maintained. Is there anything else?
I know the benchmarks can vary slightly and are mostly insignificant on modern hardware. But there are still some differentiating patches and tweaks. Like the cacule patch on xanmod kernel greatly improves the overall system responsiveness and provided slightly better performance for me.

difference between Zen and tkg kernel 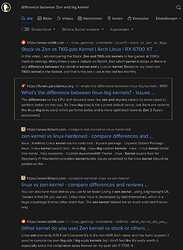 Before you open a help request, read relevant sections of the Arch and Garuda wiki.
Thoroughly search in the forum and on the web.

Thanks. Found the Arch wiki page for unofficial kernels.
Tkg maintainers have the detailed information at 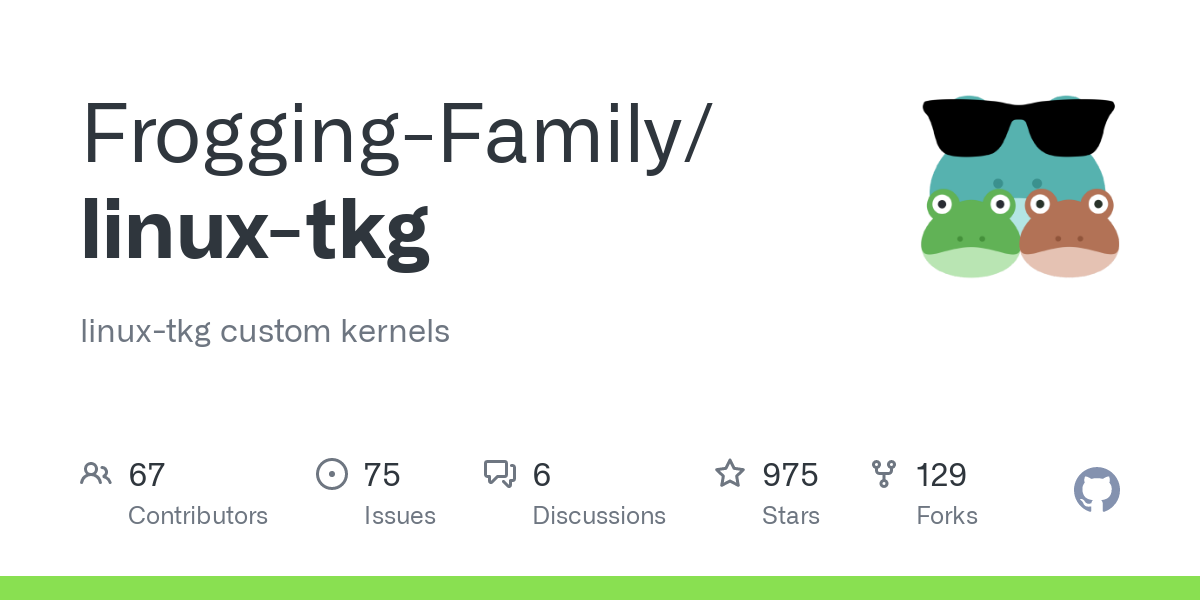 linux-tkg custom kernels. Contribute to Frogging-Family/linux-tkg development by creating an account on GitHub.

The only true way to find out if you are going to get extra performance with other kernels is to try them out. Hopefully, your choice is not final. You can install 'em all, try and later uninstall.
The same goes with distros.

If you use Pamac, it might be more stable on Manjaro.

If you use Pamac, it might be more stable on Manjaro.

Pamac is unnecessary, and not recommended by Garuda.

Yes, now that you mention it. We don't offer kernels modified by our dev team. Our kernels come directly from upstream. You may think this is a negative, but anyone who's dealt with support issues knows that their kernel mods often create more issues than they resolve.

What? You mean that adding all the available kernel patches out there doesn't make a better kernel?

I think you forgot this emoji on your last post as well.