I had dual booted Garuda with windows 10, giving 50GB HDD to the former. I had used up 40 GB / 50 GB of the user space. Today Windows forced an update due to which i cannot enter grub anymore, whenever it tries to enter GRUB it throws filesystem err and enter into GRUB rescue mode. Fortunately i can somehow boot up Windows.
Now whenever i boot using a live USB i can see that the 40GB used space of Garuda is still there unharmed, but i cannot boot the thing up. Any way i can get into my earlier Garuda without wiping the partition away?
Your suggestions will surely help me!! 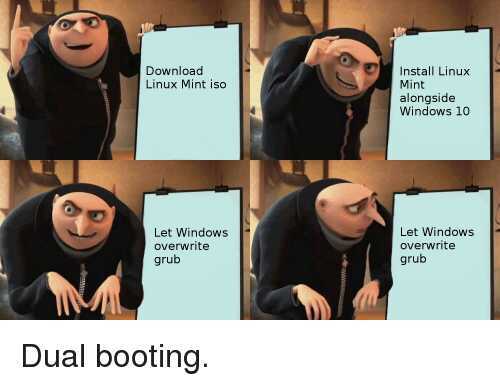 First of all, it could be that Windows simply set itself as default boot, and this could be checked from your live USB entering in a terminal efibootmgr. You should see the Windows entry as first, and then the Garuda one. The order can be changed with e.g.

The sequence you can take from the first efibootmgr check and change as needed.
If Garuda is not shown at all, you'll have to reinstall the bootloader and update the grub.
To do that, you could follow this guide:
https://forum.garudalinux.org/t/how-to-chroot-garuda-linux/4004

Reinstall Grub. Looks like someone had to do it here:

Excuses me I was re installing mau Garuda Linux last night and dual boot it with Windows 10, but everytime I turn on my device it's not showing dual boot menu, instead, it's booting straight to Windows everytime I tried a tutorial in youtube but nothing work out Is there a solution for this?

You could also look to see if Windows played with the BIOS settings, such as Fast Boot - and many BIOS allow you to select which NVRAM entry has control of booting (thus skipping the efibootmgr access requirement). Might be easier 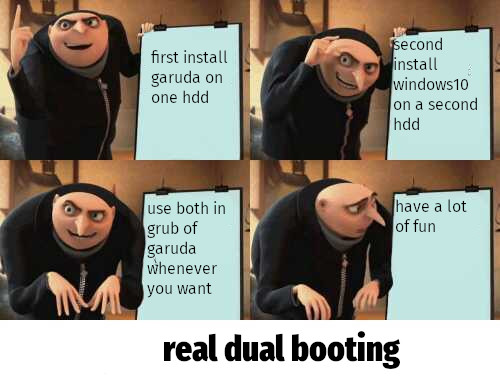 I decided to install Garuda on a new drive, not beside Windows. I use BIOS-/UEFI-boot selector to choose which to boot. So they cannot mix.

In my mind, the best way to "Dual Boot". Highly recommended.

I think you've had enough suggestions to resolve your issue now. This has all been covered on the forum before and if you are unaware this is precisely why Garuda does not officially support multi-booting.

If you wish to multi-boot, you are expected to be capable of managing how to sort the problems it creates yourself. Otherwise, perhaps like skydiving you should figure out the pitfalls first before taking the leap.

Windows will do this sometimes. You need to figure out how to resolve this yourself, or perhaps you shouldn't have installed a dual boot without doing your research first.