It's time for another major release, Garuda "Black Eagle"!

This release removes all Ultimate editions except KDE since we now have a GUI to install all kinds of applications after the initial installation. Users are now able to choose which apps they want to have installed so a "bloated installation" should now be a thing of the past

Make sure to run the setup assistant as it also enables some user services such as PSD even if you don't want to install other applications. As a result of this change the Lite editions got even lighter than before since some apps were moved to the setup assistant.

Our Garuda Welcome app also got improved (now contains only shortcuts to important stuff), settings and system maintenance related things can now be found in one of our new apps, the Garuda Assistant. It got even more options than before, eg. local adblocking via hblock (modifies /etc/hosts) - make sure to check them out

We also disabled the firewall by default as this caused some confusion (services were not working ootb etc.). If you want to have it active (recommended!) make sure to enable it after the installation.

Our iso offerings include now a completely overhauled XFCE edition by @Yorper and a new dr460nized edition which is basically a clean, sweetified KDE version with a lot of blur, MacOS like workflow and fish shell.

Also most of the reported bugs have been fixed along with some QoL changes to existing presets. The startup issues of the GNOME edition still exist for some people (most likely hardware related) and couldn't be fixed since they couldn't be replicated on personal machines. Since it will work for some people it wasn't removed from the list - if you want to check it out, feel free to do so

A few other changes include our wallpaper collection (split into garuda-wallpapers & garuda-wallpapers-extra - a lot of new art by @SGS and two eagle themed pictures by @pupperemeritus!), fewer Firefox addons by default (HTTPS everywhere is a native feature now), a new neofetch logo and a slightly changed zsh configuration (removed oh-my-zsh + readded functionality).

We hope you enjoy this new update as much as we do!

Downloads are available now below via direct link & torrent, mirrors will be updated soon as well. 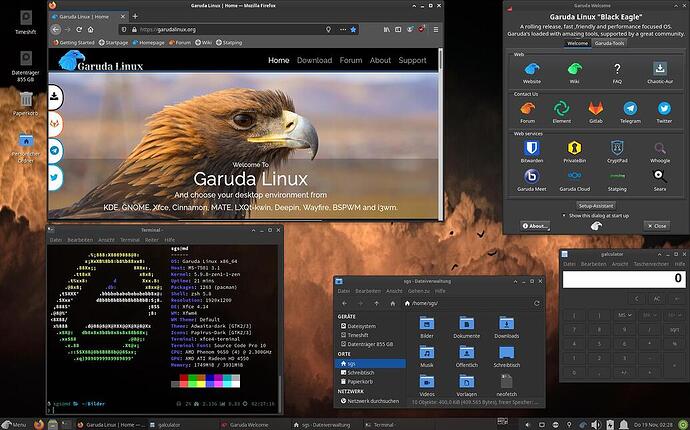 Congratulations and Great job team for Black Eagle,
Is it will automatically upgrade from golden eagle to black eagle, or we have to manually install from iso???

Dr460nized is new UI or its modified GNOME version???

It is modified kde.

Screenshots of Garuda Linux and other Linux OS Showcase

I will have a look at it soon. I wonder when distrowatch will list the update and out of curiosity how does listing new updates on distrowatch work? has nothing to do with the update I'm just a curious cookie.

After reading yesterdays email I had to come and say congrats on this. Simply sounds fantastic. Was going to install the upcoming EOS November release for my roommate, but after reading your email, and the changes in this I may go ahead and install this. Especially since it's closer to Manjaro than EOS, and he really needs something that can just be installed and used. Again Simply fantastic sounding.

Dr460nized is new UI or its modified GNOME version???

Especially since it's closer to Manjaro than EOS

Or maybe closer to Arch than Manjaro? 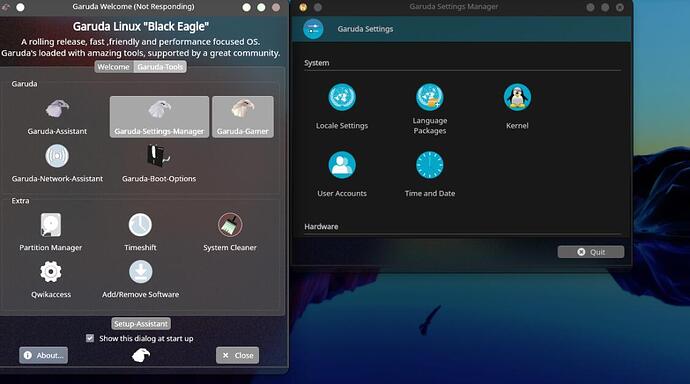 I hope this was helpful

Gee, thanks, guys. I had just figured out the edition differences and was going to install the version 201022 KDE Barebones edition today, when you released this new build. Now I have no choice but to write USB keys for KDE Lite, KDE dr460nf1r3, or KDE Barebones all over again.

Probably will still go ahead with the Barebones. Besides an base, all I need is an ethernet connection and a terminal and I'm ready to fly with the Garuda Eagle!

EOS is based on Debian I believe

EOS is, but not EnOS (EndeavourOS) is based on Arch. I believe poster meant EnOS.

EOS is Arch or I wouldn't of mentioned it.

Gee, thanks, guys. I had just figured out the edition differences and was going to install the version 201022 KDE Barebones edition today, when you released this new build. Now I have no choice but to write USB keys for KDE Lite, KDE dr460nf1r3, or KDE Barebones all over again.

Ventoy is your friend.

Sudo does not work to start gui apps