I've tried to install Garuda Dragonized Gaming Edition on PC and installation was always freezing on 79% similar to the topic in here:

Hi, I wanted to give Garuda a try but I run into following issue: PC always freezes during installation. Exactly on 79% ( Configure Hardware). My system: MB: H410M-PRO 16GB RAM Nvidea GT730 video card Broadcom Wifi/BT card 500GB HD What I tried: Different Image Different USB I use Etcher to flash the image. Any help/ advice will be appreciated

Removing the suggested lines for 'net' and/or 'video' in /usr/lib/calamares/modules/mhwdcfg/main.py didn't help:

I've tried Garuda Dragonized edition (this time not the gaming one) and it freezed on 92%... and removing mhwdcfg/main.py lines as above made failed installation, but the time of freezing was almost always the same so my last attempt (which I thought was stupid) was to simply try to get to the installation as fast as I can (I didn't bother with keyboard and other settings) and ... it installed but after restart didn't boot (open source drivers).

The installation (same as above - as fast as I can) with proprietary drivers booted properly and I finally have had installed system... that was freezing in few minutes after installation as below (i have basically broken camera, I know):

Solution for freezing and system not being able to shut down was to immediately (before system would freeze) install lts-kernel. There were no problems after that.

The possible improvement for this could be improvement of zen-kernel or creating installation ISO with lts-kernel for problems above. I can give output from garuda-inxi from PC with problems mentioned above on Monday if requested. 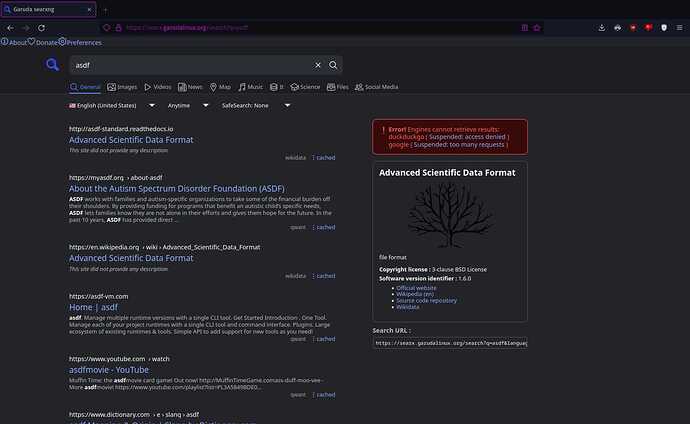 I just realized that in the newest update of FireDragon, Google was added as possible option XD...

I installed once (command sudo pacman -U <package>) mega sync application, which I downloaded from official site (instead with pacman -S), which installed it with additional package database - 'ARCH ...' (dont remember full name) and some apps stopped working correctly after system was updated. After some time I've used snapper and installed it correct way.

I think it would help (at least for me) in some cases, to give warning with remainder to try to find/install app via pacman -S with link to flatpack Archwiki page if you really need to install package not found in Chaotic-AUR.

That took a while...
I hope this feedback will be helpful for you and help with further development of the system

mega sync application, which I downloaded from official site

Why not use this?

Also I think this all would fit better into the issues-and-assistance category. Provided you want some help you should probably open a post for the issues alongside your garuda-inxi