After a few days of effort, I have produced a test Garuda Xfce-kwin iso

The aim of the edition is to replicate the Garuda Dr460nized experience, but with the stability and lightness of the Xfce desktop

With kwin as the window manager, all of the desktop effects and theming of Garuda Dr460nized work perfectly! That's right, Wobbly Windows works in Xfce!

Instead of using Latte-dock, I used plank dock, which looks very similar and seems very stable. 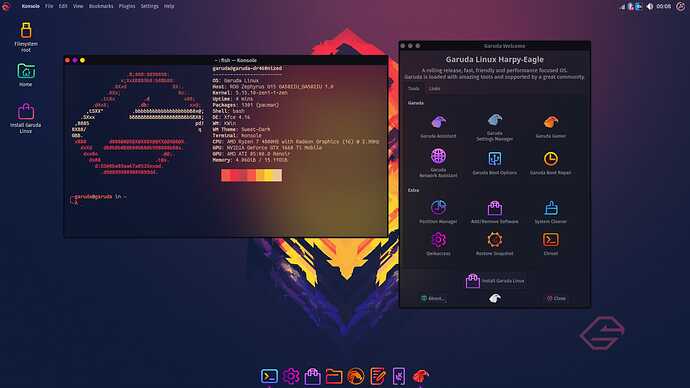 Things that would need to be done for this edition to be made official:

One package would need to be added to the Chaotic-AUR from the AUR: xfce4-windowck-plugin

I would also need to create custom packages that include all the settings for the edition to be added to the Chaotic-AUR. Currently, I have placed all my modifications into desktop-overlay folder in the iso-profile, which I know is not the most optimal method, per se.

Things that still need to be fixed or tweaked
With feedback I can add more to this section, currently I am aware of these issues:

Things that could be developed for feature parity with Dr460nized:

Please test the iso out, give feedback, and suggest fixes

This is an interesting idea! I did use Xfce + Kwin at one point and it was a very nice experience. I will sure give it a try

I made a draft pull request here:

This is a rough first version of my xfce-kwin Garuda Linux edition More work will need to be done before this can be merged and made...

I think we are open to a community edition, but changing the default Xfce edition is out of the question.
If all editions look the same, the diversity we are aiming for will be lost.

Oh yes, definitely, I would want this to be a separate community edition

Xfce-kwin has a lot of modifications that regular xfce users will not want, so it is it's own unique version separate from the xfce edition.

Xfce-kwin uses kwin and kde apps instead of xfce apps and xfwm4, so it is definitely not faithful to a traditional xfce experience

Besides that discrepancy, please let me know what you think!

This edition is just getting my feet wet mostly! I'm already thinking about possibly working with Cutefish and a number of other ideas

Me and my roommate both use KDE Dr460nized, but the biggest gripe we have is stability. I want to replicate the Dr460nized experience with the extreme stability of xfce

I also have a more meme project in the works. I may be working on reviving Hannah Montana Linux​

Xfce-kwin uses kwin and kde apps instead of xfce apps and xfwm4, so it is definitely not faithful to a traditional xfce experience

Definitely not for the Xfce-purist

I will eagerly like to know how you made an iso of your current configs. Thanks in advance.

This got by me the first time - sounds potentially interesting! I guess I'll have to go investigate just which 'apps' have been substituted, though. Some of them I would be hard pressed to do without.... (and I can wobbly the windows with Compiz, along with scale and cubes if it comes down to it).