Where does the Grub go when selecting erase drive?

There's the certain point when installing this os that makes you to select the drive when you want to install it : 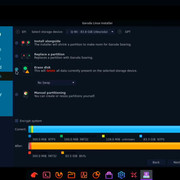 That's the point I'm asking about

I find it creepy that the installer, unlike on Manjaro doesn't let me to select a certain place where I want grub to be in (and I have Manjaro installed right now on dev/sdc , so my third drive(an external ssd with usb 3.0 since I'm using a laptop) , the first 2 being windows 10 and storage

So the question is where does grub go when you install it like this ?

The screenshot shows the "erase disk" option; after the disk is erased, a new EFI partition will be set up by the installer.

If you want to keep your existing EFI partition, choose "manual partitioning" and identify the mount point on the partitioning layout.

I see , so to be able to select where the installer will put grub I have to do manual partitioning

Huh , that's not something I find easy, especially since I have windows and data that can't be lost

It couldn't be simpler, you just click on the EFI partition, select the option to preserve existing data, and choose a mount point (/boot/efi would be the typical choice).

Far trickier is resizing the Windows partition, which should be done from within the Windows environment--not Calamares. From your screenshot it looks like you haven't done that yet. I would close out of the installer, boot into Windows, and get that squared away before you proceed.

But yes, all multiboot setups should ideally use the manual partitioning setup because it is the easiest way to achieve exactly the configuration you want.

Huh , that's not something I find easy, especially since I have windows and data that can't be lost

I would back your data up before you mess with things if it,s that important

So you mean the second opinion aka :"Replace a partition" ?

So you mean the second opinion aka :"Replace a partition"

No, I mean the last option: "Manual partitioning". 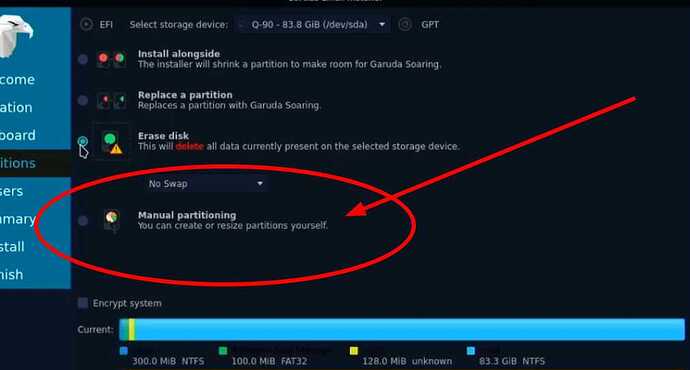 I would back your data up before you mess with things

This is very good advice.

Ok , thanks, I'll try , if I don't get it I may ask again with a better picture

Still, not to diss anyone, but look how easy this whole work could be avoided, it's only a single button: 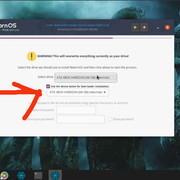 Not to diss anyone, but the replace partition or install alongside buttons offer themselves as a convenient alternative if you don't want to have your EFI wiped

But yes, all multiboot setups should ideally use the manual partitioning setup because it is the easiest way to achieve exactly the configuration you want.

I- wh-what. I have never even touched the manual partitioning option on actual hardware before, that's what install alongside and replace partition are for after all? I recommend people resize in windows and then use replace partition to "replace" the empty space with Garuda, it works excellently and is stupid simple and near impossible to mess up.

You are missing out, it's simple and works great! I would say the manual partitioning method is the less likely to yeild a mistake, but then again it is the method I am more comfortable with.

In any case, two methods to the same end goal.