I am facing this issue on all linux distros including garuda, pop os, manjaro. I just don't know why my fps is locked at 30-40 fps only(compared to 90+ on windows), I didn't try any other game (was so frustrated on this issue)

things i have tried :

No such forum is dedicated on this issue, so am not getting any perticular help

I am attaching a screenshot of all the drivers installed (pre installed, i didn't touch anything)

any help would be appreciated! 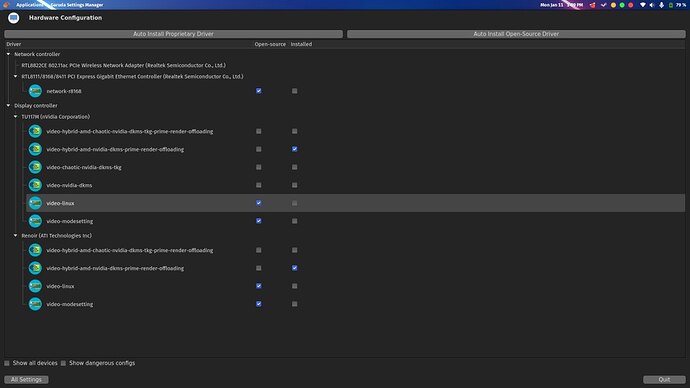 What about running with the prime-run wrapper so it runs on the dGPU?

For example, in the Steam "Launch Options" box:

U have to pass a launch cmnd on steam for csgo
I forgot the cmd
Its maybe "cores [no. Of cores ur pc have]
Without this command
Csgo runs on one or two cpu cores if i remember and stutters a lot

Edit: found it
Use "threads [no. Of cores your processor have]"
On launch option of csgo inside steam
This allows game to use all of cpu power

Thanks I will try this

But why isn't it utilizing all cores as it does in windows?

I'll try this too nd check, and also then prime-run command