Actually did this myself as well ensuring that the printer was identified and it was. Did the maintenance to send a test page but it shows it printing but no print job emerges on the actual printer. Have set this up before on Mabox linux, a manjaro permutation, without issue.

Also installed snap, snap-store, and ran a successful test message. However, I cannot for the life of me get the Spotify snap to work at all. Did "sudo snap install spotify" and after much deliberation the terminal gave me 2 AUR possibilities to install, neither of them worked.

Thanks for your help.

This seems like a dubious move to me, only because I've tried Snaps here or there with other distros and it's been nothing but grief. Do you have a compelling reason to use a Snap? On an Arch distro it seems so unnecessary, I would probably just steer clear if you can.

I installed a Spotify client on this laptop using the Garuda add/remove software GUI tool and it was easy as pie. Why don't you try that? The chaotic AUR ones are in there too, adblock and so on.

Printers can be tricky. I've had distros that are more plug & play than others for no obvious reason. Wth a little hacking around I've always managed to end up getting the printer added but there have been times it has taken me probably almost an hour! Just to add a printer! My wife rolls her eyes so hard I fear they might get stuck up in her head.

What program? What DE is this? Why weren't you able to post your inxi -Faz?

I see what you are talking about now, that CUPS page that loads up when you open "Manage Printing". Honestly, you might not need that. Have you tried using the HP device manager (since you have an HP printer)?

Add/Remove App is pamac on old ISO's, it's not a Garuda app

Garuda preferred besides CLI pacman, yay or paru, octopi as GUI,
pamac should only be used for searching.

Add/Remove App is pamac on old ISO's, it's not a Garuda app

That's good to know. I have Sway and it is just called "Add/Remove Software" so I thought it was a Garuda thing. Here's what my app page looks like, it's just the second one there. See what I mean? 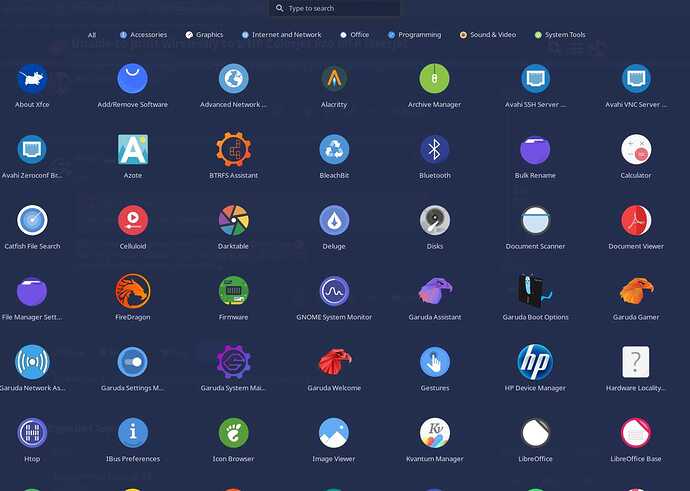 I've only ever used it for the Spotify thing mentioned above, but t's a little surprising to hear I shouldn't be using that.

Here we go again, its time for another major iso release! This time the major part of the changes happened mostly under the hood even though there are also some new features which help with the day to day usage of our favorite distro! One example for this is our new "Garuda System Maintenance" tool - more on this later. Let's start diving deeper into some topics. Under the hood As pointed out already a lot of change… 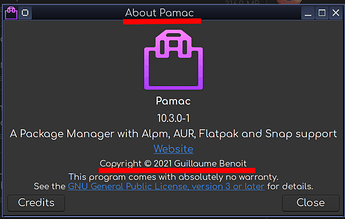 Again, good to know...but I didn't even know this piece of software was called Pamac in the first place.

I realize this is kind of dragging the thread off topic, but I just checked my Ventoy and my Garuda ISO is from November 29, 2021--way after the August post you linked above. I'm surprised it was still included in the ISO.

If Pamac is going to stay on the ISO despite being out of date, maybe some sort of warning message could be incorporated in opening it up so new users are aware they should use it only for searching and not installing.

It seems unrealistic to expect a new user who just installed the OS to find a forum post from six months ago to learn they shouldn't be using the software center that was included in the installer. Just my two cents!

I realize this is kind of dragging the thread off topic, but I just checked my Ventoy and my Garuda ISO is from November 29, 2021--way after the August post you linked above. I'm surprised it was still included in the ISO.

If Pamac is going to stay on the ISO despite being out of date, maybe some sort of warning message could be incorporated in opening it up so new users are aware they should use it only for searching and not installing.

).
The app isn't bad per se, it's great for browsing repos etc..

Beginners are more likely to use the Garuda wizard, which takes them to the terminal when they update, not to pamac.
You can destroy any system file with kate, so should we remove kate from DE now to protect beginners?

In the end, each user is also his own admin.

I managed to install my HP Color LaserJet via Garuda but had already installed the queue / printer using http://localhost:631/ url. Produced duplicate entries. Deleted the one I created and after a reboot it printed. Every OS - linux, windows - I have had to install a printer has been a pain in the ass. Has anyone thought of creating a script whereby during the install process - after establishing your wireless connection - the user has the option of a step-by-step printer install whereby the client machine can access appropriate printer drivers after finding (which OS's do now) the appropriate printer(s) on a given home/business network.

Yeah, well, you know, that's just, like, your opinion, man.

The ease of installing my printer has varied dramatically between distros. Same printer, same computer with the same hardware, but different distros and kernels and default software. For me, Garuda was practically plug-and-play while other distros had me banging my head against the wall a bit.

One thing I can suggest is to log into your router and assign your printer a static IP address. A lot of printer setup wizards give you the option to add a printer by IP address and using that feature can ease setup a lot. Many times I have done nothing more than enter the printer's IP and the computer takes the rest automatically from there.