Sweet/main plugin can't be loaded after the last update

Hey guys this is my issue

I'm trying to revert a snapshot but it's loading indefinitely

What should I do? I can't get into the desktop

First thing I'd try would be to boot to a TTY and update. If necessary chroot.

No pictures please. Especially the 2nd one is useless and could have been easilty described (this is the plymouth spalsh screen)

Kde plug in not loading tho, the snapper is not working... My system did that after the octopi update

I may have to reinstall

I'd not give up so early.
For the sddm theme problem you could try to tty or chroot and
sudo pacman -Syu sweet-theme-git
Hopefully the update might fix anything else missing.
In the worst case you could reinstall plasma-desktop, but I'd not reinstall everything before trying something.
For the snapshots problem, we'll see after...

How do I get into the console? I can't get to the desktop, when I put my psw it freezes

When you're in the grub line you normally use, press button E instead of enter.
Go at the end of the line starting with linux and add a 3 (with a space before, of course).
Then ctrl+X to boot to the console.

I have no idea 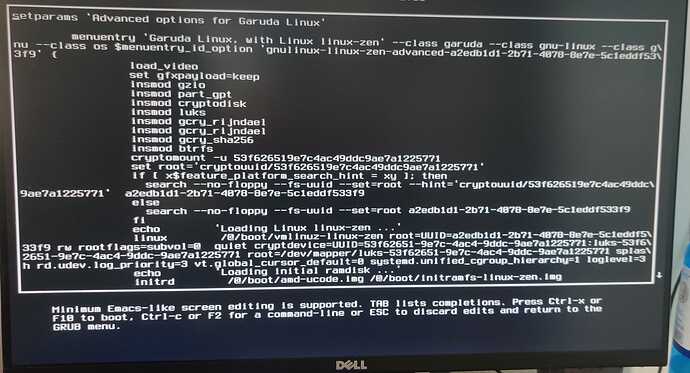 The line before echo should finish with
loglevel=3 3

I'm sorry, I'm too dumb to understand where is the thing you are asking me...

To be honest it will be quicker to reinstall, all my stuff is on a separate drive

How to switch to runlevel 3 at the Grub2 boot menu:

You should have tried switching to a TTY (ctrl + alt + f3) and retried the update before attempting a system rollback IMO.

I need to get my system working fast... Have commissions to finish and get paid, so now I will brute force it.

All was working correctly until the last package update, bah reinstall may fix all the crap I did anyway

At the end of the line that starts with 'linux' and ends with 'loglevel=3'. That's where you'd add a ' 3' and hit F10 to continue boot. Another quick option if you did have snapshots would be to boot a garuda live environment and use the btrfs assistant application to restore a snapshot.

thanks i surely will if something like that happens again... i reinstalled and doing that some stuff i destroyed now work... win win xD

i have done some dumb stuff when using it for the first time, it was a question of time for the system to die on me

@LimticBun snapshots will save you a lot of trouble countless number of times in the Arch world. I highly suggest you learn about them and start using them.

And you're at the right place, Garuda has made this feature very easy to use for everyone.

I'm kinda confused by this error. I might be wrong, but this looks rather like some Plasma version mismatches. I've seen this happening on kde-git, when some packages needed a rebuild. Is there anything in the in themes QML built against other packages?

@FGD yeah i tried but no snapshot would boot, I've used it many times but it would not work at all this time...

@dr460nf1r3 it's strange that i couldn't even login, the funny thing is that i updated the day before it did the same but i used the Snap thinking it was something that would be fixed today, but it seems was something only i had T_T