If you disabled STL make sure you use;

and then reboot. I would also delete the STL folder.

steam gives me this after resetting that doesn't seem good 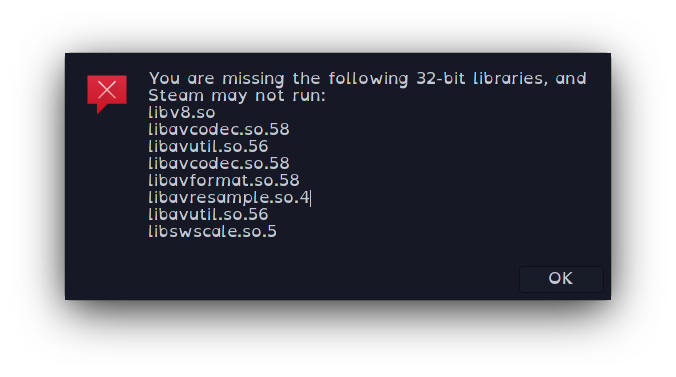 Try uninstalling and then reinstall Steam native and runtime...you can also do this in Garuda's Gamer application.

well i'm still getting the same crash and I have tried removing everything that can possible be causing it so unless this happens in other games for me (hasn't yet but I been pretty much only been playing this one game) I think it's safe to say I either found a bug that none of the other reports on protondb found or a regression in steam itself (don't think proton cause I tried different versions) Thinking about how difficult it is to reproduce the issue (as it only happens after opening the steam overlay after having the game running for over 3 hours) it's possible that no one ran into this issue before.

That is a different issue to "Steam crashing".

That is a different issue to "Steam crashing".

I don't see any other threads started by you about Latte dock?

yeah because it was unlisted it tried to split it of from this thread as i first noticed it here then I created a new post and asked the mods to move all the relevant posts there and they just delisted that thread . they might have thought that i wanted it merged here or something as post 18-20 where from that now delisted thread

turns out this is indeed caused by mango hud. been running for about a week without issues.

turns out this is indeed caused by mango hud.

I have mangohud installed and don't have any issues with Steam. Are you using the Chaotic-aur version?

Yeah should be the same. I'm trying the git package now though to see if it happens on the latest git could be an issue with Mangohud+ this game which is causing steam and the game to crash

continuation of Steam crashing
as it was closed for some reason apperently the issue is caused by mangohud and happens in every game I have tried.

It was closed because it was marked as solved and you commented:
"turns out this is indeed caused by mango hud. been running for about a week without issues."

What is the purpose of this thread?

because I never marked it as solved as I never was able to resolve the issue. plus I was under the impression that it was just some incompatibility with that game but I found out it affecting all my games (for example cold steel which was in the last thread, a hat in time, and edge of eternity)

it was closed for some reason

Threads automatically are closed several days after a solution is marked.

I have merged both your threads together as you wish to pursue your issue further.

Tried using older versions of Mangohud ( first 5.1 and then 6.4) and haven't been able to get it to crash yet so it seems like it might be a regression in the newer versions (6.5 and git) are old versions of packages from chaotic aur stored somewhere? I know that's done for the arch repos. I would like to install it as a package so i can use goverlay (have it manually installed right now)

You can get older versions of the PKGBUILD from the AUR: https://aur.archlinux.org/cgit/aur.git/log/?h=mangohud