Hey all, how's it hangin'? I recently bought a 10,000mAh Bluetooth Headset off of Ali Express straight from China because, while I own more headphones, wireless earbuds (as well as wired, obviously) and random Bluetooth accessories like BT receivers/adapters than is probably necessary (bordering on excessive), I got sick of dealing with friggin batteries and charging. The best I could do was a pair of over the ear headphones, that are quite decent sounding and have pretty decent battery life at ~14-15 hours (they're supposed to get 30h with ANC turned off and 20 with it on but I get about ¾ of that personally) with ANC on. I rarely use them without ANC. Still, with daily use charging becomes extremely tedious and before long, the bane of my existence.

Enter the 1,000 hour playback Bluetooth headphones. While I've never let them go far enough to test whether they're capable of reaching that figure, I know they can hold a charge for at least a week and still have a good 70% or so in the tank. I did catch the seller/manufacturer in one lie, and that is that they are actually 5,000mAh, not 10,000 which was a bummer but if you consider the standard capacity of 18650 cells and the fact that the headset in question only carries 2 of them, it quickly become apparent that 10,000mAh is an exaggeration, similar but nowhere near as egregious as Chinese sellers are wont to claim regarding flashlight luminosity. You probably know what I'm talking about but it's not uncommon to see a flashlight "rated" at 99,999,99LM (typo added for authenticity) when it's likely 900 lumens, at best. Turns out that not only do they still have BY FAR the best battery life of any headset/headphones/audio equipment I've ever owned, regardless of having half of the stated capacity (aside from a few exceptions like laptops and battery packs, they may surpass most of any of my gadgetry, audio or otherwise) but I ended up getting them for free because, as suspected the seller was not interested in me posting my findings on their product page because I further suspect and am reasonably certain that a 10,000mAh model does not exist and have photo evidence of the unit I received housing (2) 2,500mAh cells, contradicting the figure stated in the area of 20+ times throughout the product page which would equal a lot of refunds and pissed off buyers. If you're willing to wait 3ish weeks for them to show and be out $25-30 in the interim, you could very probably get away with the same move

Anyway, I was and still am thrilled about the extreme battery life this headset features, however, there was one thing that really kind of bugged me about their feature set that I would have been much more upset about had I not technically gotten them free of charge and that's the fact that on the surface they have inferior Bluetooth audio codec support with my phone indicating that they only support SBC. Well, upon playing around with the Bluetooth/ audio settings found on Garuda Linux, I discovered that they actually have support for several different types of SBC codec, one of which being SBC-XQ. Admittedly I was unfamiliar with this codec and upon further digging I came across some fairly shocking information. Going into my "research" I was under the impression that aptX/aptX HD/aptX LL were the best Bluetooth audio codecs that exist presently, which are supported by only the best and most expensive Bluetooth headsets and equipment, which comes at no surprise.

Meanwhile, SBC is generally thought of as an inferior codec and on paper, rightfully so however, all Bluetooth headsets and equipment support the codec. What I didn't know and you may be unaware of as well, is that while its standard HQ bitrate of 328kbit/s is only barely passable sound-wise, it turns out that it can actually work at much higher bitrates but the Bluetooth Special Interest Group (SIG) recommend 328kbit/s be the bitrate at which SBC would be considered "high quality." What this resulted in, which is still playing out today, is that most operating systems etc. Simply feature SBC high quality at 328kbit/s and nothing further. This in spite of the fact that it's actually being capable of reaching bitrates of 512kbit/s on paper and reaching as high as 551.2 kbit/s (source). On the low end, this makes SBC-XQ as good as aptX-HD 529kbit/s (the difference between 512 and 529 kbit/s would be entirely indistinguishable audibly even with the best of headphones/audio equipment) and even capable of surprising aptX-HD on the higher end of 551.2kbit/s (I guess the latter figure is reached on ERD3 BT devices, which I really don't know much about or what qualifies as ERD3 vs ERD2 but the fact remains)

There is some good news. While the damage is done regarding SBC's reputation with the average consumer (assuming they know the first thing about BT codecs), however, A2DP now requires decoders to support higher quality streams, up to 512 kbit/s, as there are now some experimental encoders that use SBC XQ, for example Lineage OS and, as we know and which I'm grateful for - the Bluetooth stack incorporated into Garuda Linux (I'm assuming SBC-XQ support comes via Pipewire but I also read about and saw some Pulse Audio patches that being support for it hosted on GitHub so a patch is also a possible source for the support being present or if the box.

Either way, it's greatly appreciated since, the Chinese seller/manufacturer that brought this 5,000mAh headset into being didn't supporting for aptX (or any of its variations) support, though now I'm thinking they may have made the better call.

File this one under "TIL" (TODAY I LEARNED)

Be good to one another. Take care Garudians!

Do you need it if I'm not raising any issues or asking for any help/troubleshooting? I'm happy to provide it but didn't think there was a need as I was simply making conversation. Give me a sec, though. I'll play ball...

Promotion? That would suggest that I am affiliated with the Bluetooth Special Interest Group or Advanced Audio Distribution Profile (A2DP) or otherwise stand to benefit from choices in BT codec support.

:: Contacts higher-ups at SIG to tell boys the plan is afoot ::

Just joshing, ofc. I'll keep this in mind for future posts of a similar nature. Thanks for the heads up and not just deleting me without warning

You're good people, I honestly forgot I didn't reboot because I was juggling things, as per usual

Do you need it if I'm not raising any issues or asking for any help/troubleshooting?

You're good people, I honestly forgot I didn't reboot

Here's one reason why we need it. LOOOLLLLLLLL You made me laugh pretty good.

Do you need it if I'm not raising any issues or asking for any help/troubleshooting?

Good looking out @SGS
You're good people, I honestly forgot I didn't reboot

Here's one reason why we need it. LOOOLLLLLLLL You made me laugh pretty good.

Which part? Me suggesting @SGS is good people? That's not very nice

A post was merged into an existing topic: Off Topic Chit Chat - (Silliness factor 5)

there are now some experimental encoders that use SBC XQ, for example Lineage OS and, as we know and which in grateful for the Bluetooth stack incorporated into Garuda Linux

What is the method for enabling SBC XQ? I became curious after reading your post, but I do not see anything related to SBC XQ in the Bluetooth settings of either Garuda or my Lineage OS phone. I inspected a few bluetooth devices I have kicking around, but most of them don't have anything beyond a few basic buttons to interact with.

Honestly, I don't know because I didn't mark a solution knowingly. I'm commenting on my phone, though so it's entirely possible I tapped the checkbox by accident. My phone's touch screen is a sensitive lil b*tch lol jk there's no shame in being in touch with ones sensitive side.

What is the method for enabling SBC XQ? I became curious after reading your post, but I do not see anything related to SBC XQ in the Bluetooth settings of either Garuda or my Lineage OS phone. I inspected a few bluetooth devices I have kicking around, but most of them don't have anything beyond a few basic buttons to interact with.

As for enabling SBC-XQ, I suspect it's enabled by default and the only trick to its utilization it's having a device that supports the codec but that's just an assumption. All I know for certain is that I didn't do anything in particular from my end to enable its use.

OK so I tried a couple of other devices and now I'm not so sure about what I said regarding enabling it. I still maintain that I didn't do anything however either all 3 of the devices I connected have support for the SBC-XQ codec or something else is attributing to its presence. See screenshots: 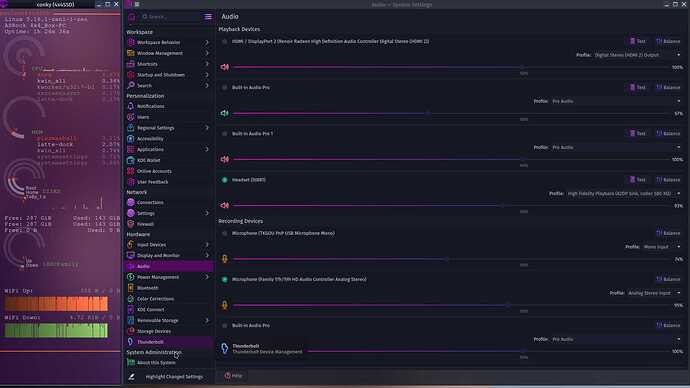 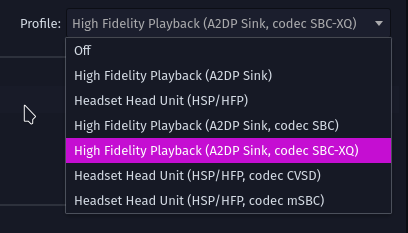 5 posts were merged into an existing topic: Off Topic Chit Chat - (Silliness factor 5)