Hello,
I'm studying for the a networking certification and trying to access cisco routers & switches via serial to console with a usb to DB9 adapter. It works for about 30 seconds and then something I can only describe as junk data keeps showing up. I've tried using putty and minicom through terminal and find much more success with minicom. Searching on the web I've found indicators that it's a font problem so I uninstalled most of my fonts with no avail- may have been coincidental but it worked way worse -I reinstalled them since I'm a noob and don't know what else I may have inadvertently broken

I am using the newest PL2303 usb to DB9 serial adapter and I tried with an older version too. I've also tried different USB ports and 4 different cisco devices with similar outcomes every time. The cable works with Win 11 and Win 10 (after installing necessary drivers). Also I didn't find anything have checked Octopi for anything pl2303 related. I'm newish to linux and very new to Arch based systems (about a month lol) so hopefully I'm overlooking something simple. Thanks for any support and much appreciation to the community as a whole!

Eventually it just becomes non responsive. Sometimes it works for 30 seconds and sometimes not at all.

The minicom settings I use are as follows (I've tried all 3 available baud rates and playing with other settings with less success) I have also used the same settings in putty- The most confusing thing is that it kind of works but fails at seemingly random intervals.

If you include terminal outputs in your post please use the proper output format in your post.

Using "~" 3 times above and "~" 3 times below the text block will provide a readable, raw look.

Thanks for the reply! I added the "~" around all outputs with the garuda-inxi at the end of the post.

Just from looking at your outputs, my first complete guess would be that you are missing a required font.

Hi! Thanks for responding.

I was thinking it may be a font issue but it does work for a while and the problem comes up independent of what the input is or what the output should be (I only posted the parts where it doesn't work).

I was thinking the drivers could be an issue since the cable I'm using have been supported since approx kernel 2.5 so I tried loading an older LTS kernel but get the same problem.

I appreciate your thoughts and I'll update this thread if I'm able to find a fix!

Edit with quick update:
I DL'd PopOS and installed as a VM and Putty worked correctly so then I opened Garuda in a VM and it worked fine as well.

Again it started looking like a font issue regular Garuda fonts mirror the vm's and it still does not work. I'm going to continue to compare my set-up to the fresh install on the vm and hopefully post the fix soon

worst case scenario I'll do a full re-install but there's no fun in that!

Hi thanks for responding. I was just getting on to post that I ended up doing a complete reinstall and everything is working as it should right now.I did compare fonts using octopi and DL'd 2 to metal that were on the vm)

Short story long for anyone interested:
I used octopi, to compare what was installed on the vm and metal and didn't find anything that led to a fix. Then I used Garuda asst to reset the listed configs and reinstall all packages- still no good. Finally, I used timehop to go back to shortly after the initial install which didn't fix the problem.

After about 9 hours of troubleshooting I decided to take 45 mins to do a clean install lol. Before any updates I installed putty to test it and it worked then, using the set-up asst I installed updates, the perf tweak, vmware, addt'l KDE components, Pamac, Libre office, SM player and VirtualBox - I used the default install settings for all except VBox I installed the (host-modules-arch) version. I periodically tested putty and it was fine. Then I connected my usb bluetooth for my headphones DL'd minicom, and google chrome and all seemed well but then It started doing then putty started misbehaving again

I then worked backward, undoing everything as I could remember and nothing...

This led to another fresh install where I've wrote everything down as I did but installed all of my programs through octopi and updates via "sudo pacman -Syu" I got to the same as the previous install and it worked -- then I spent hours trying to break it again, writing down everything and doing resets as I accomplished it. I deleted all pertinent apps and installed them via system set-up (except I forgot pamac), I aslo ran the perf tweaks and installed additional KDE components. I also tried the virtualbox-host-dkms package but nothing.. I stayed up until 2 am trying to break it and couldn't.

This morning I did 1 last reinstall because I don't want the addtl KDE components right now pamac, discover and my wifi driver(tp link t3u) are the biggest things that I don't have installed. I'll probably forgo discover and pamac unless I end up needing them later.

This has been fun and I wish I could point to one thing causing the problem but unfortunately I can't. I'll mostly be using this build for cisco labs so I won't need to change much. Though I do live by the creed "If it ain't broke, fix it until it is".

Lastly, I understand if the thread needs to be deleted since there isn't a solution

Lastly, I understand if the thread needs to be deleted since there isn't a solution

Even if you did not fix the issue and you just gave up and installed Windows or something, the thread can still provide useful troubleshooting tips to someone who has a similar experience in the future, or just wants to read and learn.

Plus, while "I reinstalled and now it works fine" might feel like a cop-out solution or otherwise not the most rewarding fix to land on, at the end of the day it fixed your issue and thus is a solution!

"No solution" is no solution, and should not be promoted otherwise.

sorry for the mistake - I wasn't able to un-delete but I could copy/paste the original.

Hi!! I found the fix/problem. During a study session It started happening (my heart sunk) thinking back, I realized that I had enabled night color control. So I disabled /restart the computer and the problem was gone. Then I opened settings and enabled it and sure enough, it happened immediately-I didn't even have to hit apply. I've ran the test a few times with alacritty and with yakuake both connected via USB to DB9 adapter. Further, I tried telnetting into the switch and there was no issue while accessing through telnet. For clarity; telnet is accomplished via IP and I was connected with an ethernet cable.

Here's the link with the video demonstrating the problem 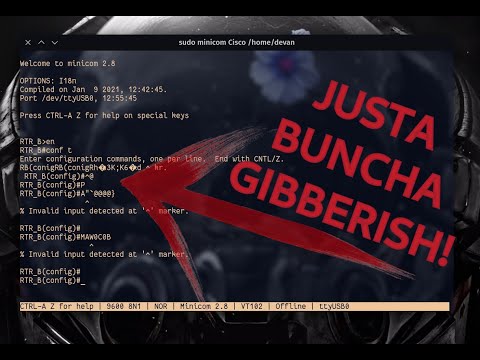