After our recent forum migration, we still had some unused processing power left at our dedicated server - what could be better than making good use of it? To provide some added value to you people, a second web VM is now serving complimentary FOSS applications to the public, namely:

Most of them allow using RSS Feeds, which might be an interesting way to stay up to date with things without relying on push notifications. Furthermore, all of those are now added to our start page for easy access. I'm also open to further proposals, depending on demand and how feasible the actual implementation would be

This is beyond awesome! I use most of these services in some way shape or form on a very regular basis so to have instances that are hosted by Garuda as options is about as ideal as it gets. Anyone who also regularly uses publicly hosted privacy respecting instances of any service of this type will certainly be aware, it's not uncommon for even the most consistently up and operational instance to have bouts of debilitating issues that lead to random outages and downtime. It's not a big deal really because there's lots of instances to select from usually, but when you want to rely on these things exclusively in stead of their proprietary, not very privacy respecting counterparts and you want to do something like set them as homepages or bookmarks. Then it becomes very tedious when all the sudden they are broken. That's not to say that a Garuda hosted instance isn't impervious to some of the same issues, but I have never come to the forum and found it to be down for example so that bodes well anyway, I'm psyched. Thanks a lot @dr460nf1r3 and the rest of you devs/mods/admins!

PS anyone that's into this sort of thing, check out the privacy redirect extension. It automatically forwards you to the respective privacy respecting alternative to some of the most popular websites period , which also happened to be the biggest offenders in terms of privacy invasion. So you don't have to do any work. However, you might want to customize the instances that you're directed to to include and/or exclusively forward to the Garuda instances now that they are a thing

This is really great, much appreciated!

I started using the UntrackMe app (F-Droid) on my phone a while back and it is really great, especially Invidious where you can just download a video with the click of a button. Being able to turn down the noise on Reddit during the occasional visit is a great relief as well.

Switching everything over to the Garuda instances is a breeze, you just crack open the settings menu and it's all right there: 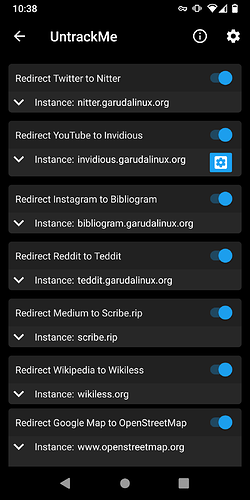 The Garuda instances are much faster than the default ones!

This is nice, I use Libredirect to use most of these. I do prefer Piped over Invidious usually though. If Teddit and Libredirect could be both adopted, then maybe Piped could be adopted too?

What I think would be cool is something like Libredirect/privacy-redirect but to Garuda's instances specifically- I honestly wouldn't mind paying for $15 a year or something to ensure proper uptime and response speed, because using Libredirect, there's really a whole load of bad instances of these front-ends. But at the same time, I'd feel bad if I just rely on one instance and that ended up overtaxing them, so being able to just pay for a good instance that I could always use guilt free would be nice.

Amazing! Thank you very much. The Garuda team deserves kudos.

I think the Team here is always in service to the end user.

A real open source "grass roots" organization with your finger-on-the-pulse-of-the-people.

Rock & Roll! Bad ass distro. Everything about it.

It seems to me that part of the allure/attraction to Garuda is the fact that the entire team gets involved and mingles/interacts with the community more than the average bear.

Excuse me for rambling but this post gave me a great reason to voice my opinion on the subject.

Hats Off to "The Team"

being able to just pay for a good instance that I could always use guilt free would be nice.

I do prefer Piped over Invidious usually though. If Teddit and Libredirect could be both adopted, then maybe Piped could be adopted too?

Looking at the documentation of Piped, it feels like we should provide Piped only.

Invidious:
Uses way too much resources.
Total bandwidth limited by the peak capacity of the load balancer.
Caching is done at a backend level.

That being said, it's up now at piped.garudalinux.org !

Coming back to my first point, I'd like to take down invidious in favor of Piped, as much more people will be able to use the instance at the same time, it seems. Unlike Teddit & Libreddit, it uses a considerable amount of bandwidth by proxying videos.

Please, don't. Don't drop Invidious.
Looking at Piped documentation's section "Why?", it seems like a baby cry and not like a serious list of reasons why use X instead of Y.

I did exclude those reasons in the citation for the reason you mentioned, they are completely irrelevant to us end users. The advantage I saw mostly was more users at the same time with the same resources used. From how I understand it, it's making use of proxying videos more efficiently than Invidious.

What are your reasons for wanting to keep it btw?

Actually, I haven't even know that an alternative frontend for YouTube exists, so I will like to try them all

Maybe we can run both Invidious and Piped e. g. one month and drop the less used service after this time? So everybody will have time to test both solutions and choose one.

it uses a considerable amount of bandwidth by proxying videos.

This means its configuration needs tweaking to disable proxying (somehow, there's got to be a way to have DASH working without proxying the entire video stream) - videos should be loaded directly from the googlevideo distribution network.

(I also prefer Invidious to Piped)

Why does DASH proxy through the server? · Issue #2026 · iv-org/invidious · GitHub

While I'm fine with testing it for now, Piped isn't listen in start.garudalinux.org yet and I don't think it's appeared on extensions such as libredirect yet, so do please give it some time.

I don't know how the system load comparea between the two but the invidious UI is nicer for me. The piped UI hides commonly accessed things like video quality under multiple clicks.

Piped isn't listen in start.garudalinux.org yet

i have added it 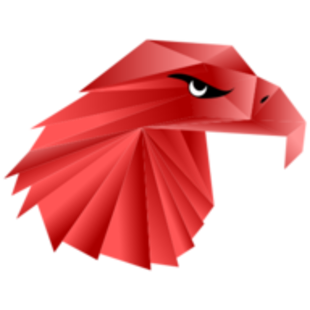 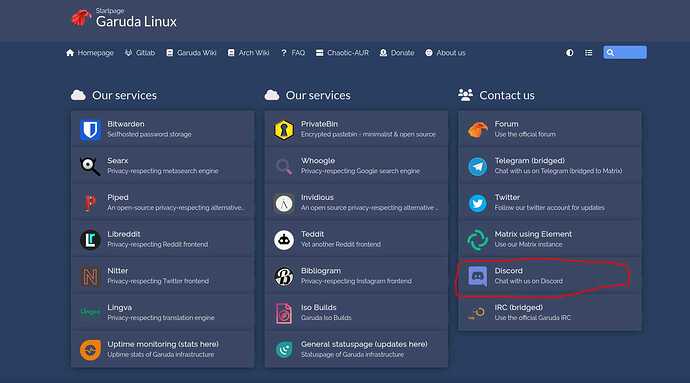 I think Garuda should drop discord and move to some open source software,
like rocket.chat, revolt or maybe something else.
It is the only non-opensource thing on the Startpage, (now that Twitter has Nitter)

Thanks for the picture, finally I see how the startpage looks like.

I think Garuda should drop discord

The original position was that there would be no official Discord server because Discord is proprietary and completely closed. People complained about that because they wanted to use a closed, proprietary, third-party-controlled service rather than one of the various open alternatives. So, there's no point getting rid of it now otherwise people will just complain again.

That's awesome! I really hate Youtube's current look and feel so having a front end for it is super nice along with twitter. Thanks for working on these!!!