So I'm a ~40 year old (non-academic (due to financial issues)) Intellectual (INTP) who's been using "Linux" for around 15 years, introduced to it by a (new at the time) former friend. By that time I'd already been a computer returns [manager] for a small distribution company (I was 18 and the only person in that department), the "tech guy" in the several small businesses I'd worked in and been using "100% IBM compatible" PCs for around 13 years.
So, like most Linux newbs, I had all the arrogance that comes with years of Windows (/Dos) experience and had the hard awakening that "Oh, Linux is really different", but as I'm also the type to avoid creating work for myself, I've still not really learned Linux properly, thus I can help with some problems here but even then, I'll be DuckDuck'ing to verify or learn for even basic things (I've completely forgotten how to vim as I've nano'd for years now).

I used to be a bit of a gamer years ago when I could afford a sufficiently poweful machine and the cost of the latest games that my friends were playing, but for several years mostly just been stuck playing alone on City builder type stuff. My preference has been Cities Skylines with as many mods / assets as my rig could handle (hence the maxed out 32GB RAM), but that's always brought such compatibility issues that I've basically given up and with it Windows is nolonger part of my life and several "critical" mods just don't play well on Linux due to .Net requirements

Garuda's brought KDE back into my life, having stuck with Cinnamon (on Mint) for a few years due to the bitterness of KDE4 and dislike of Gnome.
Strangely, an irritation for me with Gnome was the top-bar, but how Garuda's used Latte for top-bar and integrated window titlebar has been a wonder for me.

I'd also like to give props to the webdev for this site and the amusing discobot. It's all a nice balance of slick and professional without being stuffy or crowded.
Whether I can remain within the bounds of the moderator's standards for language and interaction however, that's to be seen

I'm a "silence-freak", so the cooling in my machines has often rivalled the cost of the electronics within (it's currently a little behind as I'd like to invest in a few (more) Noctua fans).

I've been procrastinating on writing a book for a few years focusing on a socio-economic, political and construction restructuring for global society which I've been formulating in my head since the first Zeitgeist Movie opened my mind to the possibilities that're actually available, rather than the narrow-mindedness I'd been brought up with by my conservative-voting parents (though they weren't nearly as bad as that description makes out) which was around 2007-08. However I lack the research capability/interest that's required to craft a sufficiently compelling book.

Ummm ... other stuff and things that'd make this even more TL;DR than it already is.

Rig (which I recently upgraded from AMD 6300/990FX thanks to an increase in credit card limit, which I struggle to keep up with as no job and heavy-ish smoker: 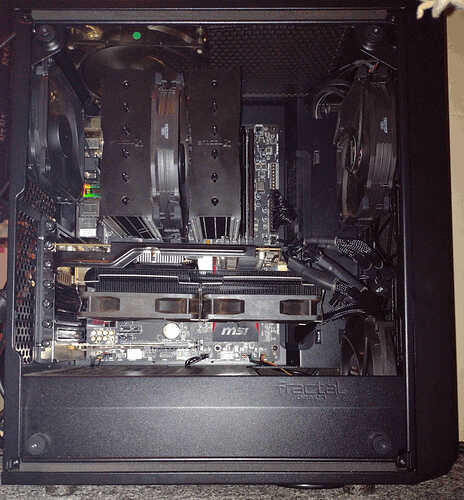 This is very much still a WIP.

A YT playlist that indicates my socio-economic & political leanings: https://youtube.com/playlist?list=PLiHXXX2kb0fDGRybeFaU8zCAYZ-UU0iDQ

Thanks for the live story. Cool ultrawide monitor, I really need to have something similar

Working on one 16:9 is a little uncomfortable.

It's two 1080 monitors (24" and 22").
I just flipped a cool background for a more uniform appearance (that looks way cooler in screenshots than it does IRL).

And yea, I can't cope with a single monitor. I feel for ya.