There have always been issues in the forum with systems broken by software centers, but it seems like there have been more than ever lately. Pamac is the worst offender, but I think I have seen Octopi causing grief for people as well.

It's fine to tell people they should only use the GUI for searching and they should install software from the terminal, but typically by the time a new person gets that advice something is already broken and they are panicked or frustrated.

It's a little confusing that there is a friendly "Add/Remove Software" button built into the menu, where anyone exploring their freshly installed system for the first time will easily find it, and then when things go sideways we are like "Yeah you shouldn't be using that, it's bad."

I know some spins ship Octopi by default now, but I happen to be booted into Gnome at the moment and it still has Pamac (looks like this ISO is from May). 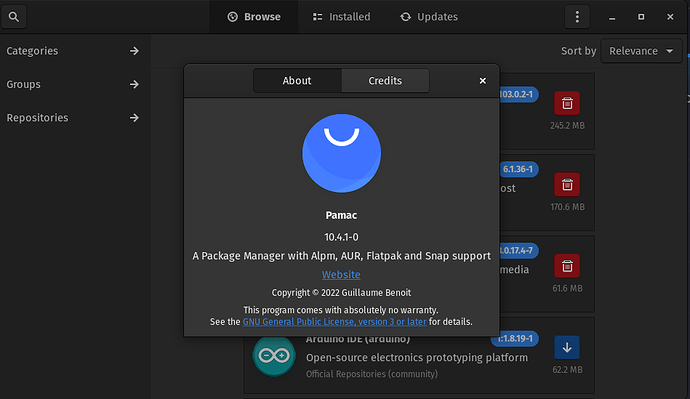 I was thinking it might be nice if the "Add/Remove Software" button launched Pacseek instead of one of the problematic GUI apps. If you set the default "Search by" to "Name & Description" it does a perfectly good job of turning up a few options to consider if someone doesn't know quite what they are looking for. 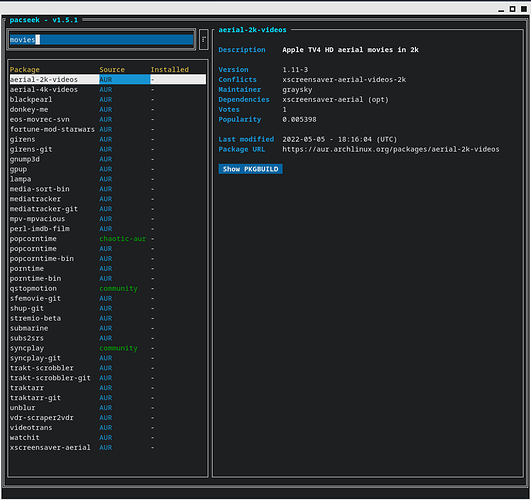 I'm not saying this is the best way to search for software or anything like that, but I do think the fact that it is a terminal-based program sends the correct message to new users. If they click the "Add/Remove Software" icon and a terminal UI launches, the unspoken implication is that managing software should be done in the terminal.

People can obviously still install Pamac or Octopi or whatever on their own if they want, we can't stop them from doing that nor would we want to. I just think it might be better if they are actively choosing to pursue that type of software management system on their own, rather than basically handing it to them on a fresh install and then scolding them when they use it and something breaks.

I have to agree with the stance there. Pamac caused a ton of issues before back in February, and thus there was an influx of posts with problems stemming from it. Sadly, problems have resurfaced again, although I think a lot of it is that people update only using it and not using garuda-update, as it is usually best to update using that terminal command before doing any GUI package additions.

Personally, I use bauh only a little just to manage what little flatpaks for applications that I can't install in a more traditional manner (and that is after doing a proper garuda-update).

It honestly baffles me how bad some of these GUI "add/remove software" programs can really mess with things. I think you are on the right track on suggesting some kind of way to nudge people to use the terminal more. Maybe we could even add a screen of the proper commands of adding software with the terminal to something like the Garuda Welcome window? Could also add a few other "better practices" in there too, like making sure people use garuda-update rather than pacman -Syu and the like. Best if we start new users on the right foot so they avoid headaches down the road.

better yet make a notification popup like in sparky linux, they made this real nicely,
so the users would use mostly that for update, and you fork pamac, octopi for garuda-update,
that would be a full preventive circle

I like the idea of launching pacseek from the menu, or, just including a link to a page to search for a package (a link to a search page could be funny for some of us).

No, we regular users need more and better GUI tools. I use Paru myself, but a GUI version would be awesome.

I’m all for just gutting all the tools like pamac and octopi. Would make it harder for newbs to break their systems as they’d need to learn terminal to even install the software store’s. Could always just remove them and have those stores as an optional install during the post installation wizard though? I know for myself though that I removed and debloated any software store’s I found on Garuda

No one needs gui tools. They’re inefficient and buggy. GUI tools are just a way of saying you’re too lazy to learn the terminal imo. The software store can be good for browsing software but shouldn’t be used installation

how about having an "updater shortcut" in the garuda welcome window that has the proper update mechanism as a single icon click?

I use Octopi's notification icon/software GUI to update sometimes. All it does is automate bringing up a terminal and propagating 'sudo pamac -Syu' for the user. I do it when I feel lazy and want a do a quick check/update. I don't see how that differs from myself doing the same via a terminal.

I think if Garuda wants the user to use their 'update'**, then maybe that should be highlighted more, maybe a system tray monitoring app, or ???

**note: I don't always use Garuda's update because it changes my mirrors automatically to the "world's server mirrors" which to me, are always slower than my local choices (USA.)

Just to note, I sometimes use bauh GUI to update, it is excellent and I have never had an issue with it. Again, running/automating the same commands in a terminal environment I would myself.

Would make it harder for newbs to break their systems as they’d need to learn terminal to even install the software store’s.

I am not really sure this is true. I hang around and help support people on quite a few distros forums some of which offer a GUI package manager and others that don't. I have not seen any significant difference in broken systems overall.

While it is true that some problems can be avoided that way, it is also true that it creates other problems. Using a CLI tool takes away the abstraction that a GUI provides and a bad command can often do a lot more damage than a bad GUI.

I don't think the decision to remove or include GUI tools should be based on the fact that sometimes there can be problems with that approach. There are problems with every approach.

Ultimately, make that decision based on what you want to the distro to be and who you want it to be for.

**note: I don't always use Garuda's update because it changes my mirrors automatically to the "world's server mirrors" which to me, are always slower than my local choices (USA.)

Use the mirror you want

This is not an official GL opinion, just what I do when it takes too long

Just to be clear, you do this each time you update?

Right, gotcha. I will save this on a digital post it them.

Ok, so this broke my 'Garuda-update'.

I changed 'Germany' in your post to 'United States' and entered the command in terminal. I then ran 'Garuda-update' and it gave me this error;

So, I then used the command exactly as you posted it with 'Germany' in it returns the same error. I will probably have to do a reinstall of the whole garuda-update.

Look in your locale, I think DE work like Germany, so US work for United States???

Reinstalled 'garuda-update' so that worked, back to "normal." Just used your command again with 'US' this time, and that worked!

Thanks, we got there. Now I can use the official update of champions.

as I wrote in an earlier post, Sparky-Linux has a real snappy
means to do that; could be the solution to
all in this post, concerning updates. 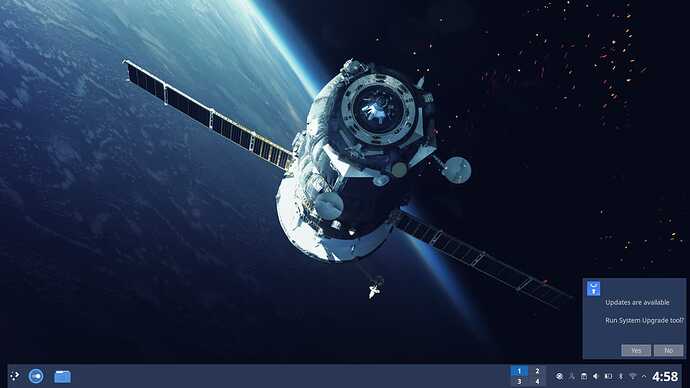 this notification stays there until you confirm or dismiss, that is comfortable and
moves user away from updating some other way, well they could ... but it is unlikely they will. 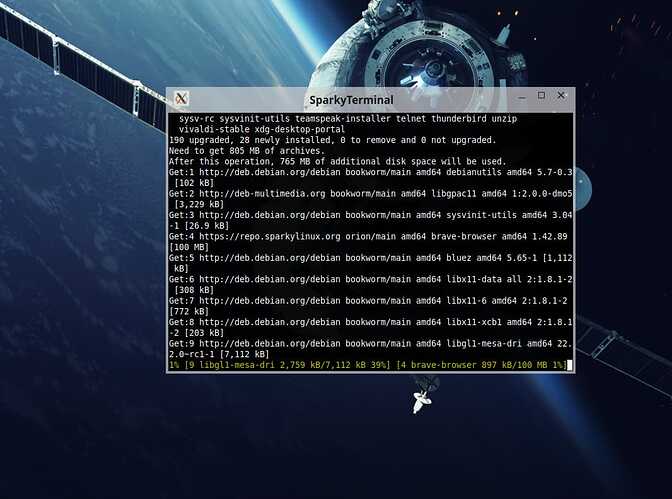