I've been holding out on buying components for a brand new build (some of you may recall I posted about soliciting some suggestions a few months back) and I finally put together some specs.

I've been reading up on alder lake support, and it seems even Windows 11 is having some difficulty in properly supporting the mixed architecture cores (performance cores vs efficient cores), as well as some issues with the scheduler in the Linux kernel properly utilizing the mixed-core architecture.

Is there concern with installing Garuda on a new build with the alder lake cpu? I couldn't find much on Arch Linux regarding this, so thought I might ask here if anyone has any insights?

Linux Kernel 5.15 already support alder lake processors out of the box, so Garuda Linux should work fine with new intel chips.
However, alder lake processors are based on big.little architechture, as you already know. So with every new kernel update, performance would be improved and bugs will be ironed out.
As far as I think, performance should still be decent in your pc though. (At least better than 11th gen SKUs at same price point)

I dunno where/what you've been reading.
This may be useful additional info (mostly focusing on motherboard issues) 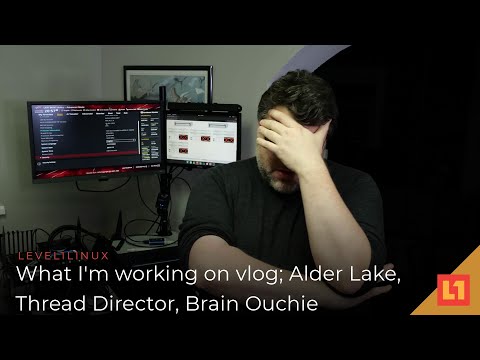 Given Garuda's performance focus is largely for gaming there is a comedy and tragedy towards a CPU with such compatibility (even on Win) and instant account bans for online games. Depending on the games you play I'd take a WIDE birth from the current Intel chips. I'd also say don't come at them with the idea this will be ironed out either but again this depends on what you play. Older games with older anticheat and devs not looking to update/fix/patch things will still ban you post haste with these chips.

I really wish Anti-Cheat would die in a fire, nothing but problems, doesn't work worth a chit...I've only heard of 3 or 4 games actually switching on the Proton/Wine compatibility with a few AC's too so even now it seems like there is either some foot dragging or things are not as easy as BE and EAC made it sound like it was to enable so these false positives with the hybrid CPU's may be a problem that persists for a while outside a few select big ticket AAA titles. Though I think even those will drag their feet. More banned accounts means the fools who constantly dish out for these triple A scamware will just buy another copy to get a new account.

This is true, but there is the option to disable the E-Cores for such games, providing people are happy with this workaround and confident they'll always remember to do so. It's quite possible that forgetting one time could see the account banned.

Yeah an oops and weeks dealing with non-existant support to get unbanned never mind the hundreds of dollars in paid product you're now out. You could probably script something to only allow certain cores run a game & it's children but still sketchy.

Plus outside potential regional price or availability issues AMD ATM is still better for power as well. If Intel can get below that 10nm process then maybe next gen we'll talk. But again that still also depends on the games you want to play and how much time they've put into QC for the hybrid chips. I'm sure in a few generations this will be a moot point. All the current games that won't be patched will be shutdown anyhow as online games are trashed when they don't make money and new ones will have been around the hybrids to have technology to correctly use and identify them.

Another fun note DDR5 will suck for a while so it's also better to wait unless you were going to pair DDR4 with your new rig.

get below that 10nm process

They already are, this is on Intel 7. Because everyone who knows the importance of lithography is gonna be be fooled by that, right... RIGHT!!

Another fun note DDR5 will suck for a while so it's also better to wait unless you were going to pair DDR4 with your new rig.

I was gonna mention this, but couldn't figure the appropriate wording, relevance and significance.
DDR5 doesn't suck... relative to DDR4, only to DDR5 of 12-18+ months from now. Though trying to acquire DDR5 at the moment sucks.

You know what I totally forgot they pulled that strange marketing ploy to mislead everyone about the process nodes they were fabbed on...I can't blame Intel for getting scummy right now but...they are scummy. They seem a lot more panicked than the last time they lost the lead to the Athlons and Opterons.

Yeah I don't mean like DDR5 is the new DDR2 just that the first gen is always kinda crap. ATM the price to performance just isn't worth it other to brag you have the latest and greatest. That said iirc DDR2 or 3 when first release was actually a tad slower than the previous iteration but had other core traits (for the time [like lower op voltage]) that would see it surpass the previous gen stuff i.e. why it was the next gen. Also availability fo sho!

That's always been true. The newest memory being outperformed by the best of the previous, at least in some - many metrics / use cases.
A compounding problem at present is the ongoing chip shortage, though that's also kinda worked in DDR5s favour as it's meant 4's pries have been relatively high.

I wouldn't wanna be building a new machine right now. Going DDR5 means paying high price for crap DDR5, but having the platform for upgrading later and memory that'll be useful down the line for a second/server build where the "slow" DDR5 would be fine, or going DDR4 which is available for more reasonable prices, but no upgrade path. Wouldn't be much issue if he already had a DDR4 system, but he's where I am, on DDR3 (where I recently upgraded to the best DDR3 system I could to see me through the 4-5 transition and skip 4 altogether).

That of course is on top of the issue of big.LITTLE being new tech on PC and will is/will inevitably have teething issues, just like AMD's chiplets did. Though I'd certainly like to have the finances to make it a realistic dilemma to face

I think big little will be adapted to fine in the over all sense. It's not new, just new in X86 land. It's the games with anticheat that make it so sketch. Which is to say yeah teething issues are normal and in most situations you could buy the new chips and just wait out any crashing and such...but the possibility of losing games, money, accounts over it is a 100% pass for me heh.

I hear you about building a new box now, I just did. Built my roommate a new gaming machine (and moved her to XGaruda from Xubuntu) I had to bail and really make a lot of changes to the build due to price, availability, if the parts were legit (several SSD controllers are being swapped for crappier version) but I got it done and wasn't too insane, but it's still a terrible time. That said I also didn't have to splash out for 100% of the parts. I had PSU/HD/GPU on hand. If a GPU had been in the mix the machine would have been DOA. Flipping garbage entry level GPU's going for $1000 WTF!? Everything is buyer beware and price gouging!

Any distro has really no say what processor it supports, the ball game is under the territory of the Kernel you choose for your distro.

Linus Torvald's RC kernel is the most bleeding edge version of the Linux kernel that supports the latest CPUs on the planet.