Hey guys, I was wondering the normal ISO release schedule. Its been the 7th for a few months now but I haven't see a June release yet. I was in the habit of doing a monthly clean install. Can anyone shed some light on this?

It would be soon.
Actually, there were 3 major bugs out there.

But all of them has been fixed. So, we will release june edition before more bugs get attracted.

You mean Garuda Grub,, right? I ask cause I was in the middle of copying files and there was what I thought was a quick power outage, but turned out Garuda hiccuped and shut the system down. When I turned it on and it got to the Garuda Grub screen the entries for AcroLinux were missing, but I can boot into and use Acro without issue. As for Garuda other than a handful of settings being reverted and having to replace my panels all seems well.

I was in the habit of doing a monthly clean install.

Not trying to be rude, but why would you possibly want to do this?

Learn to manage your upgrades properly with Pacman. Learning to merge pacnew filess is a required skillset if you wish to use an Arch based system. Waiting to use a new ISO, so that you can avoid updating your pacman.conf file is pointless.

You need to learn to manage the Arch update process properly or perhaps you are better off using a fixed point release distro.

After re-installing on a monthly basis I've noticed new default applications added as replacements, different configurations made as an 'upgrade' to the default, and some QoL improvements that just weren't captured by an update. Not doing this out of any Windows Mentality. Just want to see how Garuda has evolved on a monthly basis.

Learn to manage your upgrades properly with Pacman.

Maybe the question could be "Just out of curiosity why are you doing this? There may be an easier way to what you're doing."

perhaps you are better off using a fixed point release distro.

This whole reply smells of "Lrn 2 linux" and this simply isn't the case.
Not to be rude, but that's a horrible way to start a reply.

We've had an endless parade of posts from new users unfamiliar with the Arch upgrade procedures since the switch to pacman 6.

This has lead to weeks of wasted support time trying to teach users resistant to learning, how to merge pacnew files. This is required to properly maintain an Arch system.

We have a very small volunteer development and support team with Garuda. This is not a large commercially driven distro with a huge staff off paid developers and support staff. We do not have limitless resources to waste supporting users unwilling to learn how an Arch based system works. That is what the Arch Wiki is for. This distro expects the user to show initiative and do their own research prior to requesting assistance.

We do not have the time or resources for hand holding newbies through every hiccup they experience using a rolling distro. They either need to learn to manage maintaining the Arch update process or use a static distro instead.

In reality everyone is better off (including the users) with a little up front honesty about rolling distros. If users aren't inclined to want to learn how to maintain an Arch based rolling distro they would be better to save everyone the frustration and simply use a system more in tune with their needs (static based).

If you wish to call that pushing users away that is your right. In the end it is better to be forthright about what is required to use a rolling distro in the long term. It is a disservice to new users to pretend that an Arch based distro is for everybody. Those unwilling to learn how to maintain their system are making a very poor choice if the are choosing Garuda to install and think it is self maintaining system.

I can certainly understand a not for profit, open source software, and otherwise primarily volunteer based organization. I've worked for one for over 7 years and I am huge proponent for open source anything and helping out where I can. So I get it when you say it's a hard life sometimes.

With that said I (and the community) are not blind to the extremely stupid questions that come up with little to no effort given on there part. The question I presented to the team however could not be researched past looking at the previous release dates and there is no official posting that I am aware of that lists the distro schedule. The reply from @Naman was absolutely fair as I have been here for these troubles too. I was not expecting anything more than that response which was more than I even hoped for. I honestly thought I'd get just a soon™ and nothing else.

So, we will release june edition before more bugs get attracted.

That line should be memorialized.

Or even a national holiday. Hell, run it up the flagpole--I'll salute!

The question I presented to the team however could not be researched past looking at the previous release dates and there is no official posting that I am aware of that lists the distro schedule.

I realize that, and I apologize for you being the brunt of all the pacman 6 update frustrations. This just twigged a raw nerve because it seemed like a way of avoiding the need to learn how to merge pacnew files.

I understand your rational, but you can easily check Gitlab to see the new changes to each release. You don't need to go to the extreme of fully reinstalling.

I keep noticing that there is a tendency here for users to behave like mimosas.

If you tell the truth, you are rude, arrogant or worse.

Putting oneself in the victim role is also very popular.

A new banner is needed, we try to help here with installation problems and everything concerning Garuda.

No Linux training, basic training or help with paid software or unsupported software here.
Everything that can be easily solved with the help of a search engine does not have to be reinvented here over and over again.

The quintessence of this is a new avatar 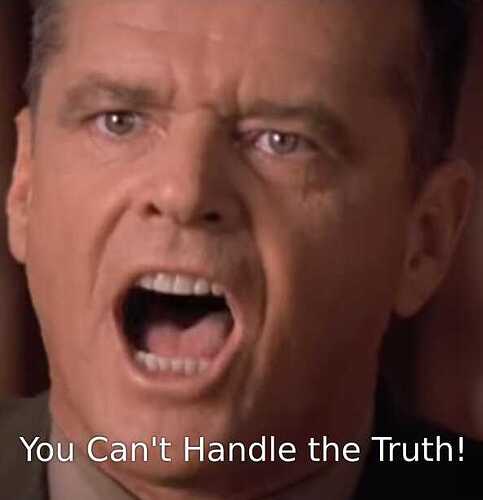 I honestly thought I'd get just a soon™ and nothing else.

Then why do you ask?

Since you never know what can happen, you should be more careful with announcements.
People like to be pinned down too much.

It's all good @tbg no worries man!

Not sure I get the mimosas reference but I think I understand the gist of what you're saying. A lot of what he said is fair also, so I'm not arguing

And these are a lot of the users

It's all a plot hatched by me while under the influence.

The goal is to drive @tbg (in particular) off his wee misty northern island, and into the daylight where he will be exposed as the biggest Help Vampire of all time.

He's been trolling all of you for months and no one caught on. Muahahaha!

How did you uncover all my vampire/troll alias accounts?