Following a laptop setup guide in this forum, I installed auto-cpufreq and its relative extension for gnome shell integration. But when I run it, I am presented with this 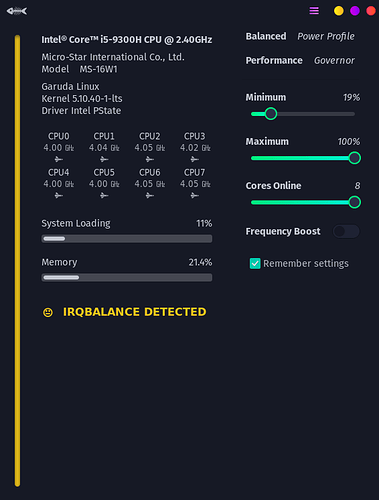 I tried to add noirqbalance to the kernel parameters, but it still displays "irq balance detected".
So, is it safe to remove this package? And is there a way to do so? Because when I tried to run

Thanks in advance for any input or opinion on this matter

It's listed under https://wiki.archlinux.org/title/Improving_performance#irqbalance so I'm not sure why its presence would be an issue.

What problem are you trying to resolve by removing it?

I don't know if that's true, so I was asking because I don't want to break my system (even though thanks to timeshift I should be able to go back)

What about just masking its service?

Thank you! That worked like a charm! Apparently disabling it was not enough for some reason, I didn't even know that masking was a thing