Hello and thanks to everyone.

I have made the decision to use Firedragon that is an excellent browser.

Thanks to all TBG you are right.

I have found that MS Edge will work after I delete the AppMenu widget from the top panel. This causes problems with other apps not showing a menu at all, but edge works which I need to use for work. If anyone has a solution for either getting edge to work with the AppMenu widget, or a way to get other apps like konsole to show it's app menu without using the widget, I would greatly appreciate it.

I'm not new to Linux, but fairly new to KDE and very new to Garuda.

I see that there are being several updates there these days.
You'd better refer to which version you are using.
After the one of 22-Sep (I think 95.0.1020) which solved some problems there is now a 96.0.1028 from 28-Sep which should solve other problems I think.

I did have some updates pending. I'm installing those and I'll let you if it works or not and what versions I have.

Yep, latest version works. Thanks, and I'm sorry I didn't update before posting.

Bill, Sorry to reply late but I will give you a general rule of thumb, follow this you will never face an issue with Microsoft Edge. 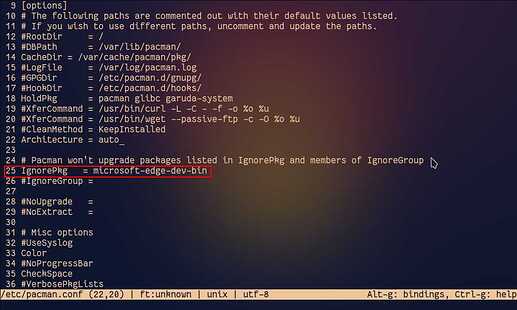 That would never be recommended, because not updating will obviously lack patches, which will be insecure as well as buggy.

But wait, it would still be insecure and buggy.