Hello everyone!
I already used Mint for one year, but never used Arch, so I know a bit about Linux.

Anyway, as said in the title, I have 2 GPUs, the one from the AMD CPU (AMD ATI Renoir) and a GeForce GTX 1650Ti. I managed to installed the Nvidia drivers (460.56) trough the installer from Nvidias website (Blender can use the GPU). Problem is, my laptop screen isn't working. It only shows the OS on the external monitor, and the laptop screen isn't recognized in the settings, but the backlit is on.
Note: Laptop screen is wired to the AMD & Nvidia card. Every screen output (USB-C and HDMI) are wired to the Nvidia card.

I managed to installed the Nvidia drivers (460.56) trough the installer from Nvidias website

Wrong path.
Undo what you have done, following instructions from where you installed this.

After you have cleaned up as suggested, reboot and go to Hardware, click on Auto install proprietary drivers.

Well, it doesn't work, because the GPU is used by the desktop. The installer gives me an error that it is already used.

And these are the hardware settings I currently have. 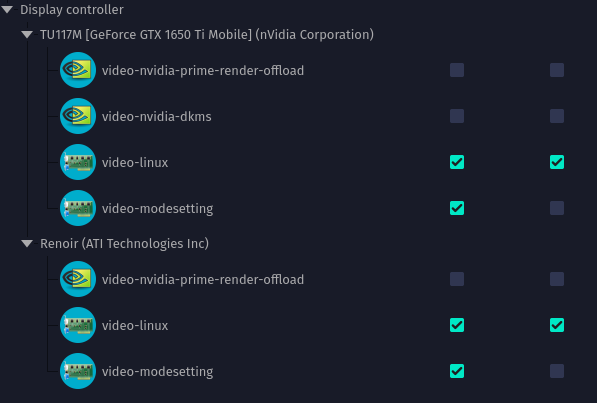 I managed to installed the Nvidia drivers (460.56) trough the installer from Nvidias website (Blender can use the GPU). Problem is, my laptop screen isn't working. It only shows the OS on the external monitor, and the laptop screen isn't recognized in the settings

Yup. You installed the NVIDIA driver and it's now running X through the NVIDIA GPU that is wired to the external display.

Restore a working snapshot, then use the Garuda tooling instead of the NVIDIA driver bundle.

The installer gives me an error that it is already used.

Use instructions for removal from the source of this driver.
I can't help.
If you have instructions for terminal (commands), it could be better if you logout your GUI session and switch to TTY, login and run removal commands.

(Had to remove the post 'cause I forgot to hide my name.)

Hello!
So, I reinstalled the OS because of broken drivers and Timeshift. I did the install, made the update, tried the driver install trough the settings, but getting the error.

I'll chose the TKG kernel, since it's the basic one. To uninstall from the standard kernel, simply right-click, and press Uninstall?

Okay, good and bad news.
I managed to get both screens working with mhwd by typing sudo mhwd -i pci video-chaotic-optimus-manager-tkg in the terminal. But now comes a new issue, my external screen has screen tearing (it's not G-Sync neither FreeSync), and my laptop screen is not running 120Hz, even tough the settings say it's 120Hz.

Welcome to the Optimus world of pain, where sometimes, for no apparent reason, things don't work properly.

Have a read through PRIME - ArchWiki and see if any of the troubleshooting areas sound useful. It might also be worth trying switching to the standard kernel and profile rather than the TKG kernel and profile.

Okay, I read this (NVIDIA/Troubleshooting - ArchWiki) along with the multi monitor. Let's hope that I didn't broke the drivers.
But why can't Nvidia make the drivers in the kernel like AMD?