How do I make Alacritty look like Garuda's Alacritty?

Hello,
I am trying to get the blurred and transparent background from Garuda's themed Alacritty to my Alacritty instance on EndeavourOS (arch-based as well). I'm using KDE Plasma (X11). I've figured out the transparent part of it, but can't figure out how to get the blur part. I also want the default shell used by Alacritty to be fish, but every time I change my default alacritty.yml file, Alacritty will no longer open. I also want neofetch to automatically run upon opening Alacritty. Can anyone tell me how to do this? Also, I've already tried to just copy over Garuda's alacritty.yml but it doesn't give me the blurred background.
Thanks,
Steam

And I'd like you to do my laundry at your house. :pffft!:

I was told on the EndeavourOS forum by several Forums Moderators to come here. I asked there first, and the Mods told me to come here. 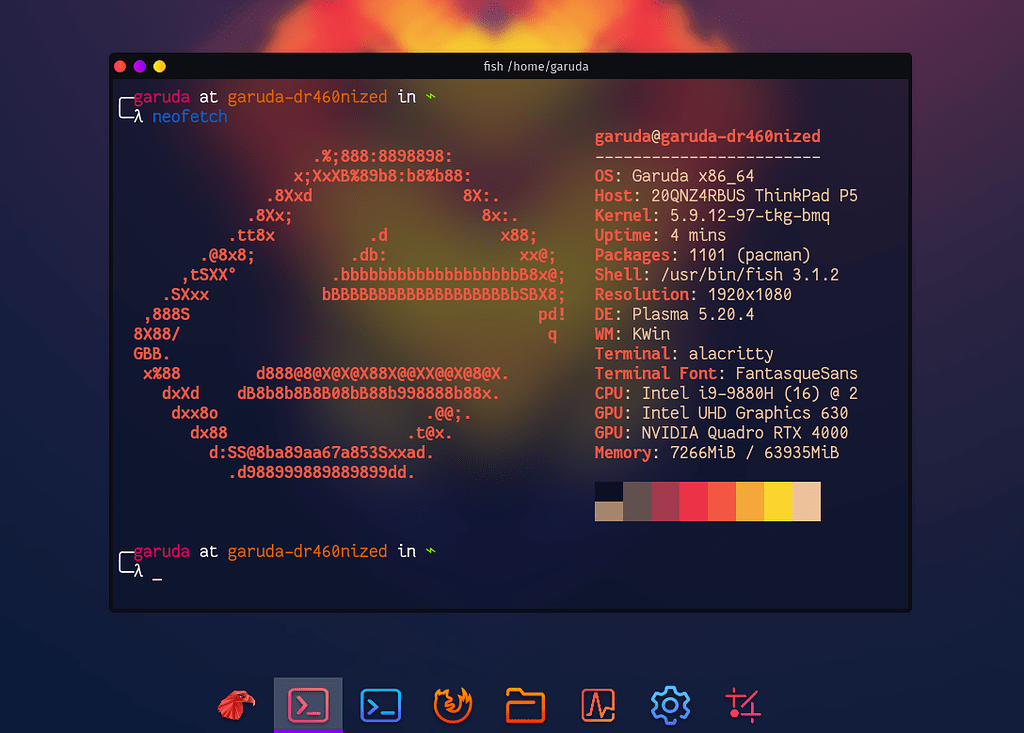 How do I make the Alacritty terminal look like Garuda Linux's terminal?

go through the garuda's alacritty config:

But before that, make a backup of your default alacritty.yml

Oh and welcome to the forum!

and the neofetch on start. that is managed by the shell's config file. for fish ~/.config/fish/config.fish
just add neofetch in the last line of config.fish

Personally, I don't have neofetch cluttering up my terminal. But if I wanted to have that kitsch displayed every time I launched my terminal, I would be a bit more clever about it.

There is a simple solution, if you want that.

Instead of just running:

add this instead to your .bashrc (I'm not sure whether it works on Fish, since I don't use Fish, but there must be an equivalent, perhaps an expert Fish user will share it):

This way, the neofetch screen will show instantly when you launch your terminal emulator.

The way it works is this: It prints the content of the file named .nf to screen when the terminal is launched (and if the file does not exist, redirects the stderr to /dev/null so nothing is displayed). Then it launches a non-interactive shell session in which the output of neofetch is saved to a file named .nf. This has no performance penalty since it happens in a background process. Next time the terminal emulator is launched, the contents of this file will be displayed. What you will see will be the outdated neofetch output from since you last run your terminal emulator. However, that should not be a problem, since neofectch readout stays mostly the same, but the speed at which your terminal emulator will launch will be worth it.

Alternatively, if you like to complicate stuff, you can make a cronjob that updates that .nf file. It's a bit of an overkill imo.

I would recommend against doing so

yes. that is a pain bcs neofetch is a shell script of over 800 Loc. honesly. I sometimes use paleofetch. neofetch in C.. or just another fetch programs. Lemme know if you know some

garudafetch (neofetch fork), I have deleted all the graphics except the one from Garuda.
This increases the speed of execution