I need u sopport, i have the garuda dragonized gaming edition, and I added the blackarch tools, and i would like add the blackarch tools in the applications menu.
I tried installing some packages like 'blackarch-config*', blackarch-menus and archlinux-xdg-menu, but none generates the menu.

A lot of blackarch tools are command line tools, so they don't have a GUI icon. What is the tool you want to get into the menu?

hi, ty for answer. I have a lot of blackarch tools. and I expected that with the blackarch-menus package the menu would be generated automatically with the tools that I have, but it was not like that.

I had tried the version of garuda dragonized blackarch (when it was still in the download options). and when downloading the blackarch tools, they were placed in the menu.

This thread makes it sound like you may have to re-install any packages that were installed prior to blackarch-menus to get them to show up.

I go to try it

I try it, but the elements are incompletes 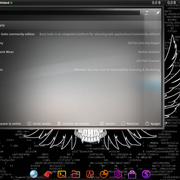 thank you very much for the assistance