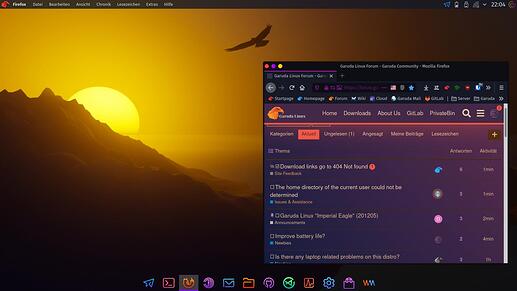 Its once again time for another release!

This time we focused on fixing some bugs & inconveniences as well as providing a more consistent, fresh look to some parts of the "Garuda experience". In order, you will find a refreshed look browsing our website, two new themes & improved existing ones for our forum, a sweetified Cinnamon & MATE theme while i3 is returning to its old look with Conky. Garuda network assistant and Garuda boot options were previously unthemed, now they correctly use the existing Kvantum theme.

As some of you might have noticed, our garuda-* metapkgs were replaced by *-support packages. Since the plan was to move them to AUR rather than our GitLab the names had to be adjusted accordingly. Also, some of them were dropped entirely due to MWHD being responsible for VAAPI/VDPAU packages now too.

As part of this update the standard kernel was changed from Linux-zen to Linux-tkg-bmq as this one has some advantages (read more here: https://github.com/Frogging-Family/linux-tkg) and performed better.
There are also CPU specific versions of this one available on Chaotic-AUR.

Along with the kernel change, the ISO names are now less confusing as the Lite tag was dropped (these are regular versions right now). As there were 2 KDE versions in the last release, KDE dr460nized became the new KDE standard edition.

Since Garuda Linux uses Arch repos, we were also affected by the move to Python 3.9 which meant a rebuild for all Python related applications in our repo to make applications work again. This has been completed and you shouldnt run into errors caused by this change.

Apart from these already mentioned changes, a lot of the reported bugs have been fixed in various contexts - the user experience should be a lot more stable now. We apologize for all the confusion around the meta-package changes & Python upgrade. Also, we plan to implement user notifications for these things as there were quite a lot of forum posts about this, although its still unclear how it will work & when it is ready.

As always, you are encouraged to report bugs or post ideas how to improve this distro! Please use the forum for this kind of posts as it is quite impossible to troubleshoot individual problems in a big chat

Downloads & torrents are up at our server (builds.garudalinux.org), the upload to Sourceforge and OSDN will happen soon (if you wonder why its showing unavailable, just take the torrent or direct link please until Upload has finished)

I thought the ISO I just installed was less than two months old. No big deal just curious. Now I do have one question those of us already running the OS will all the Firefox update get added? I don't really use FF, but it's nice to have there as a just in case. Thanks, and congrats on what I'm sure going to be another great release. Loving this build so far.

Yes, you got them once you had the latest garuda-browser-settings update. Firefox reads the settings file whenever restarted.

I'm using KDE Plasma Lite. So the new update is available for me or should I have to switch to the new edition...?
And congrats for the release

One of the advantages of rolling release is getting updates continually. So you are getting always the latest software updates. The only thing which would require a reinstallation is for example a change of partition layout.
The things which require manual intervention (if you want to follow the latest changes) are:

will this wipe my current KDE Light set up. or will it be on Pamac?

Hello, i'm here from Manjaro and... woow! I use Garuda Barebones my compurer have a lot of better performance. Thank you kernel tkg-pds-bmq is the right way. btw: I skipped night sleep

It's mean classic KDE will be dropp?
And if i use LXQT-Kwin it will be better for performance, because is lightweight? I search all way how to make laptop maximum responisve with maximum fps.

One more question...There are many options of Linux-tkg-bmq in Kernels, so which one I choose for install...

Just a heads up, for nvidia GPU users, you should install the tkg variant of Nvidia driver module if you use tkg kernels. (fixed grammar)

If you're going to use one kernel from this repository with NVIDIA drivers , you'd better not use official Nvidia drivers packages. And instead, use chaotic-aur ones.
From chaotic AUR homepage.

If you are already on KDE it should be just fine

It's mean classic KDE will be dropp?

There is now KDE Ultimate with the "regular" theming only. Its settings package is still available so KDE Lite installs got the updates too.

Hmm one of the Manjaro community members made a tool in the past for Manjaro might be worth looking at for news regarding Garuda https://github.com/moson-mo/mntray leaving a link here

It's what I used on Manjaro and it works pretty well. @dr460nf1r3

Thanks for mentioning this, maybe it can be forked

@librewish what do you think?

Remind me darkly to have made the logo.

yes I said that as friendly as I could

I just had to read that beginners do not read.
So either way such requests come up.

but that always depend on your hardware setup

What would you suggest for those (few?) of us running AMD Ryzen 4000 series CPUs? Get linux-amd instead?

PS: Trying that ends up in errors. It is complaining that modules intel-agp, i915, nouveau are missing.