I was attempting to install balenaEtcher and ran into this error. I've tried a few times to see if I was missing something but I cannot seem to get this installed properly. 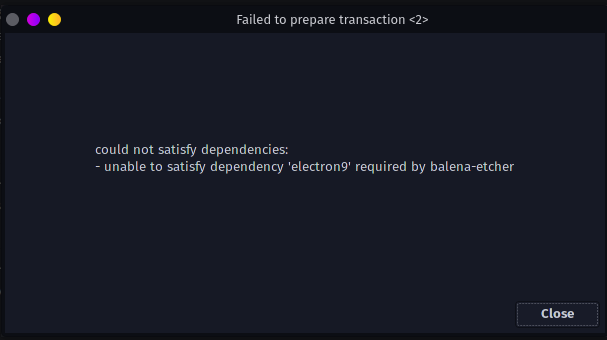 Read the comments. You might want to try re-installing, but directly from the AUR.

It looks like electron9 has been removed from the community repo and moved to the Aur. The current version for electron in the community repo is 10. I guess the maintainer of etcher hasn't updated his package to reflect the change.

It's no longer a required dep. Oops! I was wrong...misread comments.

EDIT: I would be tempted to:
A. Use the -git version, or
B. Install isoimagewriter, which is made for KDE.

My CPU is currently cooking eggs....

EDIT: I would be tempted to:
B. Install isoimagewriter, which is made for KDE.

I am doing this... etcher is not worthy.

the bin is flagged out of date

It's a quick pkgver bump if people are impatient.

The only reason Garuda recommends Etcher is for all the Windows only newbies attempting to install Garuda. While there is nothing technically wrong with Electron based apps per se, they are totally inefficient resource and space wasters. Many other comparable Linux GUI programs are available that don't have the excessive overhead of etcher.

Do yourself a favor and install one of the good Linux only apps that aren't electron based. Why cause yourself all this grief for an app that many consider close to spyware for the data it reports back to etcher. There's just way better choices for a Linux install. Personally I recommend Suse Studio ImageWriter, but there are lots of other good choices out there without Etcher's negative aspects.