Does anyone know a joystick to keyboard remapper?

Does anyone know a joystick to keyboard remapper? I wanna play xcloud games with my keyboard and mouse. 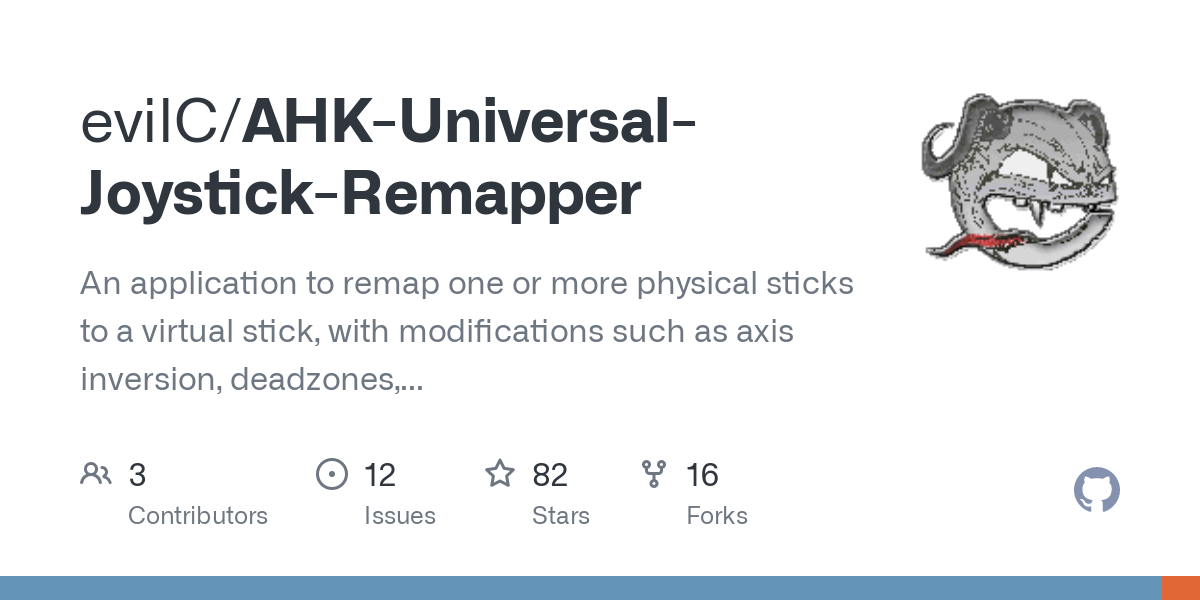 GitHub - evilC/AHK-Universal-Joystick-Remapper: An application to remap one...

An application to remap one or more physical sticks to a virtual stick, with modifications such as axis inversion, deadzones, sensitivity etc. Uses the vJoy virtual joystick library. - GitHub - evi...

Keyboard mappings (keymaps), console fonts and console maps for the Linux console are provided by the kbd package (a dependency of systemd), which also provides many low-level tools for managing text console.In addition, systemd also provides the localectl tool, which can control both the system locale and keyboard layout settings for both the console and Xorg.

Unless you are using very old joystick that uses Gameport or a proprietary USB protocol, you will need just the generic USB Human Interface Device (HID) modules. For an extensive overview of all joystick related modules in Linux, you will need access to the Linux kernel sources -- specifically the Documentation section.

Remapping a Joystick to Keyboard or Mouse | AutoHotkey

Making Other Joystick Controls Send Keystrokes or Mouse Clicks. To have a script respond to movement of a joystick's axis or POV hat, use SetTimer and GetKeyState(). Joystick Axes. The following example makes the joystick's X and Y axes behave like the arrow key cluster on a keyboard (left, right, up, and down):

If you like to play games on Linux with a gamepad instead of a typical keyboard and mouse input system, there are some useful apps for you. Many PC games come without controller support out of the box, mainly because of the nature and the genre of the game. It is possible to add controller support unofficially. This article will list some apps that allow you to remap key bindings to a game ...

I wanna play xcloud games with my keyboard and mouse.

Unless they have native support for keyboard and mouse for some games (from what I see the Xcloud requires a controller or one mapped to a touch screen on mobile; so that is probably a no.)... then its probably not going to happen. There are too many analogs in an xbox controller to apply a wrap to keyboard & mouse (2 triggers, 2 analog sticks). I have yet to hear anybody be successful in this in a easy to control manner. Even if it is possible, I doubt it would be suitable because you would have to map various analog degrees to a keyboard.

Anyways... TL;DR , its a developer side issue and you can't really put a xbox pad onto a keyboard and mouse

There are also a few options in the AUR:

But emulators do it very well, like yuzu for nintendo switch the keyboard works as a switch pro controller, very similar to the xbox controller.

can´t make any of those work on the xcloud. Maybe it's a browser compatibility issue.

That's cool and all, but that those are programs with support to do so inside their own programs.
Its a bit different than what you were asking is a 3rd party program to wrap keyboard and mouse to output xbox style controls, as what you need to output needs to be picked up as an xbox controller for xcloud for it to work. There are a ton of programs like the ones listed above in this thread to do things the other way around (there are ton of joystick-to-key programs out there).
Best thing I can tell you now is search the internet to see if there was something hidden that I couldn't seem to find yet.

Yeah, I was not seeing things in the right perspective. Really just found programs that do the opposite. Thanks for the insightful answer.