Difference between Performance and Power-Saving Tweaks

Perhaps there's a link explaining the difference clearly? I don't know exactly what to search. 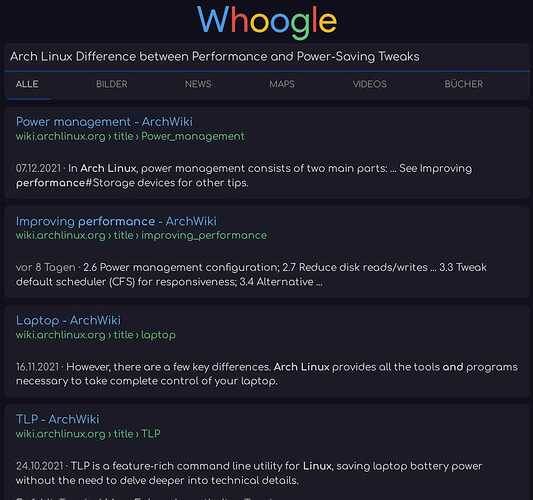 Technically yes, a higher frequency will use more electricity than a lower one, but when you consider a machine running over a period of time, the whole picture is more complicated than that. For instance, the process of changing frequencies from low to high can be more electrically demanding than running steadily at the higher frequency. A processor-based battery preservation technique might be not to run at the lowest frequency possible, but rather to run at the most stable frequency possible.

If you are curious, I found this thread interesting to read through as it captures quite a few different perspectives on the topic: microprocessor - Why higher frequency processors use more power? - Electrical Engineering Stack Exchange

With inxi, I'm noticing CPU freq is on average 4700mhz when mostly idle

This might not be as accurate a gauge of CPU usage as you imagine. Think about it this way: it's a instantaneous snapshot of your CPU usage at the exact moment when you are running a large process through it (the inxi itself). I'm not saying it is wrong, or you should do it another way, just...something to consider.

To be fair Garuda is tweaked for performance it is stated as that on the website, Nobody twisted your arm or forced you to use Garuda did they it was your choice, comparing with windows is like comparing a Mini with a Ferrari and then stating why does the Ferrari use more fuel. Lol.
The other question " i keep it on all night" that is your problem not the distro its your electric bill.

Regarding the “running all night” comment and efficiency discussion, in a pretty much worst case scenario let’s say your processor is consuming an additional 40w of power than if you were not using this clock speed all the time. This really won’t be the case because there’s a lot of factors at play including load, but anyway.

An extra £4.89 per month of cost in a worst case scenario… it’s not much of a difference really is it. Personally I’d stop worrying about it and just enjoy using Garuda

You can set power profiles via power-profiles-daemon easily, this locks the frequency from what I've seen. Very good tool, you should look into it

There's nothing wrong with wanting to understand what the computer is doing. I don't think this kind of comment brings anything useful.

That being said, there's been other threads on this same topic; but even there I have yet to see a clear explanation. If I really want to know more of the effects, I could run some benchmarks and compare battery life between Linux performance-tweaks, Linux power-saving and Windows., if I find the time for it.

No their is not but the way its asked is the wrong way instead of complaining it would of been better to ask how Garuda gets its performance tweaks and what are the drawbacks. of the extra performance, or how can i decrease the performance of Garuda then the answer is simple use another distro, anything that is tweaked for better performance has to use more to get more out.

@mandog your stance of "Garuda is only performance oriented" is not the whole story. It can be tweaked for battery life instead of performance. Here is a forum post discussing such:

I am running Garuda on a Lenovo Thinkpad X380 Yoga. I am really enjoying learning about Arch (have been on Fedora and Ubuntu for several years). On another post, I was mentioning battery life and it was suggested that I select "Enable Powersaver Tweaks." When I select that it says there is a conflict with "Enable Performance Tweaks." If I attempt to disable "Enable Performance Tweaks" there seems to be several dependencies that will be removed. Can I safely disable the performance tweaks wi…

Our goal is to provide a distro that focuses only on performance while making it beautiful. Thats why we made some (sane) performance tweaks.

This is what gives Garuda its performance out the box.
@Hanuman Windows out the box is set for a balanced performance, that is the middle setting now i always use windows in performance setting.

Most out the box Linux distros are also set to ballanced performance, Garuda is more a gaming rig so its set for performance out the box

@mandog it is possible you are only reading the parts you are personally interested in. 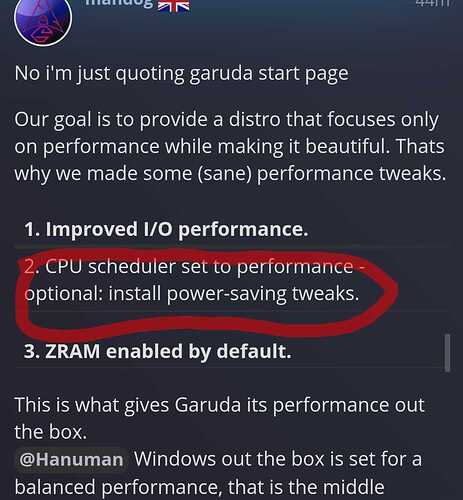 Certainly not note the words"! optional: install power-saving tweaks" that means optimised for performance out of the box.
The user has to install power saving if they want it lol, that is how it reads

how Garuda gets its performance tweaks and what are the drawbacks. of the extra performance

That is exactly what I asked. Just so that I can get an idea of whether the drawbacks are "sane" for laptops. Or even, what kind of electric consumption it represents. I think that a lot of people have those questions in mind when they look at what's written on Garuda home page. It says we can install power-saving tweaks, but "who" should install those and under what circumstances? Now, someone already answered that the electric consumption difference is very minimal.

On Windows, it's considered (from what I know) that Balanced has the same performance as Performance; and that there are no benefits to using Performance mode even for gaming.

That question is open ended?
depends on what your use case is?

Despite the consumption difference being marginal from a desktop user running their PC 24/7 perspective, it's not marginal to a laptop user with a battery... so your answer for why would I use power-saving tweaks is: if you have a laptop and rely on the battery charge lasting a long time.

Additional, say, 20W usage, if you have a 100wH battery, is potentially a big deal for some.

Yes, but the real question is how many Angel's can dance on the head of a pin.

I'm contemplating closing this thread as the discussion here has become completely futile.

To the OP, Garuda is an open source project. Anything you want to know about our power profiles can be found on our Gitlab. Keep in mind our power saving configuration has been modified recently to provide more choices at installation time. So your default configuration may be different than our current choices depending on how long ago you installed your system.

Our setup is an open book for all to read on Gitlab. Please look for the information you desire to learn regarding our power saving configs there.

To answer the question as to what frequency the CPU runs on idle, just saw it with this command