I would suggest, as an improvement, to add a description for each kernel.

What's the difference between (and which one should I use?)

Also the list needs to be sorted. It's in a random order.

Nothing really fancy, but that would be a huge QoL improvement.

Why should you do that?

In my BIOS, for example, there are only abbreviations that are not even explained in the manual.
The motherboard wasn't free, btw.

Here you get, as you say, a great tool for free and still want more than you get with paid goods?

Maybe you can open an MR with the corresponding data for the kernels in Gitlab?

I think, as in the forum, we should not repeat everything that can already be found on the internet

I spent some time searching the other day and didn't find much; but now searching again I found the descriptions on xanmod main page. "most" of them, except ROG and ANBOX. 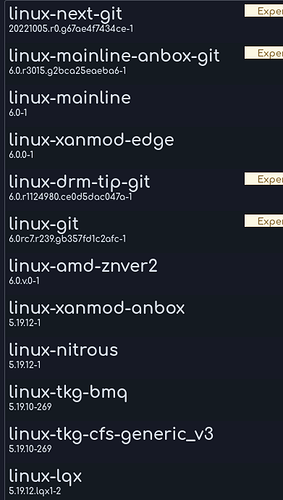 Edge : the latest xanmod kernel but can be unstable
Anbox: abviously it is for anbox
Rog : i don't have any idea
lts : long term support kernels , are well tested and stable , they don't have frequent updates
rt : realtime kernel , it said that this can assure high latency while video editing , which means the lag between video and audio will be less , rt kernels are also said more responsive , but can increase cpu consuption .
(That's all what i know , if something is not correct then tell me

Rog : i don't have any idea

except ROG and ANBOX.

To see the descriptions you can use

Since i am playing around with Kernels trying to find out how to find to best energy-saver kernel for my notebook i would also welcome some discription or link to discriptions.
When i installed xanmond kernel i had no clue what is different to edge-variant.
I just knew the variant xanmod-anbox

So yeah would welcome this feature.