I have Garuda KDE Barebones on my laptop but am tempted to install it on my desktop, the machine I use the most. I have all of my data on a separate drive and it is compressed and backed-up to an external drive, so no worries.

However, copying that data from the external drive takes a long time. But Google provided this new utility and I was wondering, because it is so new, if anyone here has ever used it, and if so, what were the conversion results?

"Ntfs2btrfs is a tool which does in-place conversion of Microsoft's NTFS filesystem to the open-source filesystem Btrfs, much as btrfs-convert does for ext2."

I only know btrfs-convert, work fine.

and just try out

and just try out

I guess the worst that can happen is it fails and I need to do an ordinary copy/paste. LOL.

I'm rather leery of this kind of operation myself. You never know what the result will be with a conversion. I would rather just copy a drive using rsync or dd as this will guarantee your results are the same as what you started with originally.

Say for instance the conversion program didn't handle malformed file names correctly. Maybe the whole conversion process doesn't crash, but months down the road you found out precious files had been corrupted when it's too late. I'm just too paranoid to trust this kind of operation. I had enough failures in my long forgetten Windows days to not like this option.

Just not worth doing a conversion for me. I want to be assured my data is not going to be at risk.

A fair point - Linux isn't as friendly with spaces in names and so on, is it?

I'm just too paranoid to trust this kind of operation.

Is that possible with data that is precious?

Good points, all. Good discussion to watch and learn. Thank you!

If you do not change the original backed up files, you can always go back to them.

So create a new backup in the new system.

I could swear that it works so well but I wouldn't bet.

A fair point - Linux isn't as friendly with spaces in names and so on, is it?

But there are some cases when some programs can't recognize the file type. It is generally when extensions and headers of file mismatch. They are generally not computers fault. Some people purposely do this, to create malfunction and it is kind of attempt to "hack" the system or to secure the content of file. Further explanation is beyond the scope.

But this usually doesn't happen because

But anything can happen. It's just that we should prefer to stay on safe side, if it doesn't have any problem.

Ya see...clarity is a wonderful thing, dispelling confirmation bias instantly.

My thanks once again.

I guess the worst that can happen is it fails and I need to do an ordinary copy/paste. LOL.

It failed, not enough room for the metadata. Anyway, Barebones is installed, configured and applications stocked, for the most part. About an hour left copying data over, add that partition to fstab, then I'll be done. Oh yeah, and I created/added a small, 4GiB swapfile.

I note swapfiles are handled a bit differently with BTRFS. Btrfs - ArchWiki

There's also another utility called WinBTRFS that's pretty interesting....I'm currently looking at migrating a 2- drive dual-OS config to a split partition RAID array and it would be interesting if I could convert my Win10 install to run on BTRFS and have both OS's on the same filesystem and be able to make whole-system snapshots of the entire RAID array that would image both OS's in one snapshot.....I think this would only really be good for daily sequential backups, but it's interesting lol 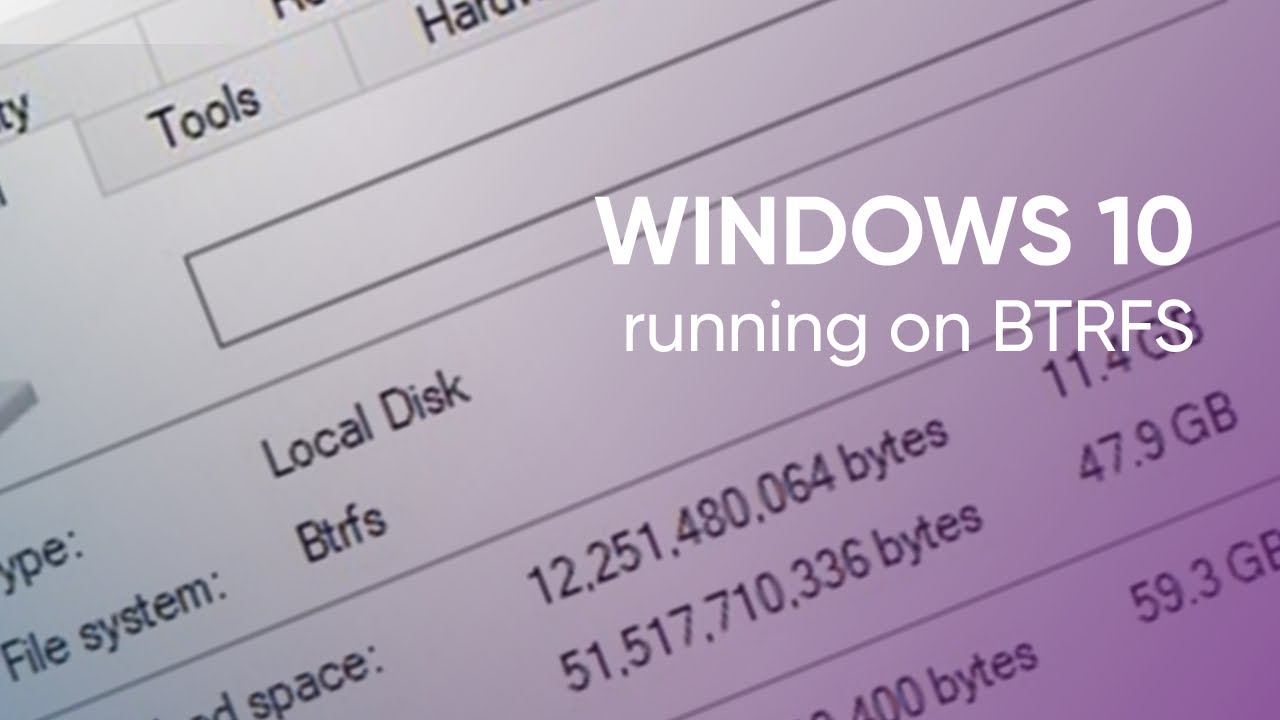 yeah, I read about using quibble to boot the nt kernel......

No --> I mean: This ntfs or Win to BTRFS stuffs are very in early state and unstable.
The author of the video says: "It's slow. It's ugly. And honestly, quite pointless. But it works!"

That's why I post the video to show that even if someone get success with this, it won't be so usable.
The booting time seems never ending and even he did just vanilla Windows install, no apps, no games etc.

Yeah it's for sure in it's infancy, no doubt about it....It would be interesting to puhtz around with but I wouldn't try to make it a daily driver, least not for quite a while! Like I said, though, it would be really nice to actually have a modern filesystem under Windows; NTFS has outlived its' usefulness and there's much better filesystems out there in many respects- btrfs/zfs come instantly to mind- and I mean Microsoft started experimenting with ReFS clean back in Win Server 2012, and we STILL haven't seen any measurable forward momentum, so I think BTRFS would be a good replacement for NTFS....