Clarification regarding Release and stability

If we see Manjaro linux official website under the features menu, we see there is a point regarding stability.
Manjaro linux properly tests daily arch updates through dev channel and seperately tests Manjaro exclusive features and ensures stability and no dependency conflicts before releasing these features to the mass.

Similarly I would like to know regarding the stability of garuda. Does it release updates after Manjaro has released, releases simultaneously, or has its own criteria for testing purposes. 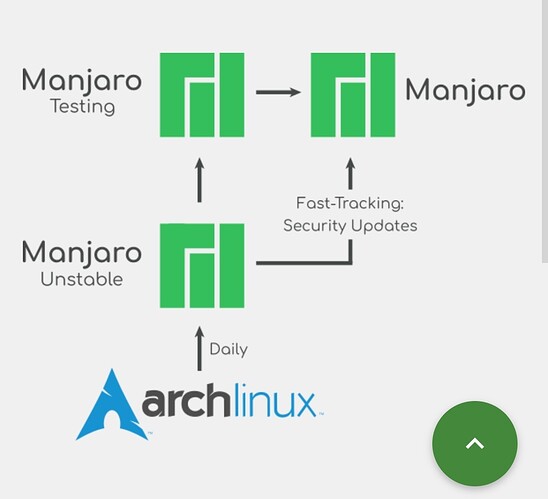 Does it release updates after Manjaro has released

Garuda is not related to Manjaro in any way.

Garuda is based directly on Arch, and Arch performs its own testing of packages.

I think you have Garuda confused with some other distro.

Does that mean that system stability is not your primary concern as you all heavily rely on timehift backups? I suppose in a previous thread of mine I was brought under notice that garuda primarily aims to serve home and casual computing purposes and also is preferred for newbies to arch because of its simplicity of use and installation. These statements are conflicting with your previous post. On watching some videos over YouTube I learnt that garuda uses some Manjaro originated apps to provide simplicity of complex commands rather one would run on terminal. Mostly regarding Pacman I guess. So can you please specify the primary aim of garuda apart from beautiful looks. Like kali is for hacking, debian for sysadmins, tails and whonix for privacy and orignal arch for customisation due the cli based installer.
Is it privacy and ease of use towards arch?
So if an update breaks arch Linux does it simultaneously affect garuda?
It is rumor or a fact that arch incorporated bleeding edge updated software at cost of stability and thus faces issues regarding stability and might break. Is this true for garuda as well? Then it's a great thing to have btrfs and backups

Got it.
Long story short,
Garuda pushes updates with official arch repo updates. Doesn't worry about stability as they have great backup and restoration tools.

What do you mean by "system stability" ?

"Doesn't break ever no matter what" or "package versions stay the same" ?

If it's either of those things then any rolling-release distro is not for you.

A built-in snapshot system means you can quickly recover from mistakes you make with system configuration, and from a bug or regression in a new package version. This is not "stability" but is a recovery route (and as far as I know fairly unique).

is preferred for newbies to arch

That has never been said by anyone with anything to do with Garuda. Someone (or you) is making Garuda out to be something that it isn't.

Garuda provides an opinionated default setup which meets the needs of its maintainers. You can do exactly the same thing with an Arch installation, but Garuda removes the setup time.

Garuda is not "n00b-proof", is not intended for "n00b" users, and won't prevent "n00bs" from breaking their installation.

if an update breaks arch Linux does it simultaneously affect garuda?

Pretty much - except you have a rollback function and can hold back on updating until the issue is resolved.

It is rumor or a fact that arch

You'd be better off asking Arch about what they do.

As of yesterday, the M version of Pamac 10.0.0-1 is not working and they had to downgrade to an older but working version of Pamac. I am running the latest version of Pamac, so nice. Have you ever ran Garuda? After over 50 years writing code and developing systems, I find Garuda to be stable, up-to-date, and, the Garuda Team is always there with the right answers.

In my experience, Arch or distros closely related to Arch, like Garuda and EndeavourOS, are considerably more stable than Manjaro's stable branch.

Haven't got the foggiest why though.

I've been using garuda for a few months. Only reason my install broke is due to my error and updates rarely broke it. Which also could be easily restored using timeshift.

Does that mean that system stability is not your primary concern as you all heavily rely on timehift backups?

Arch by itself is incredibly stable. The Manjaro stuff is just advertising B.S. I've used a nearly unbreakable vanilla Arch system for years, all the time watching many Manjaro users (since version 0.8.10--I found my old login) 'Stable' systems break during major--batched--updates. They do not need three tiers. Just ask the folks that have been using Manjaro Unstable for any length of time.

I am grateful to Manjaro, however, for an introduction to Arch.

so much this! timeshift is your best friend in a rolling release.