Hello !
Currently i am using on my notebook with Ryzen 5500u the linux amd Kernel. I have there a better performance then with Linux-Zen Kernel because it can throttle the CPU down to 400 Mhz while Linux-Zen and Mainline LTS kernels can do this only to 1400 Mhz.
Usage Linux Zen: 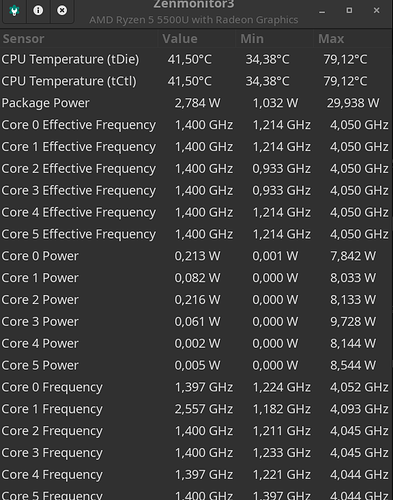 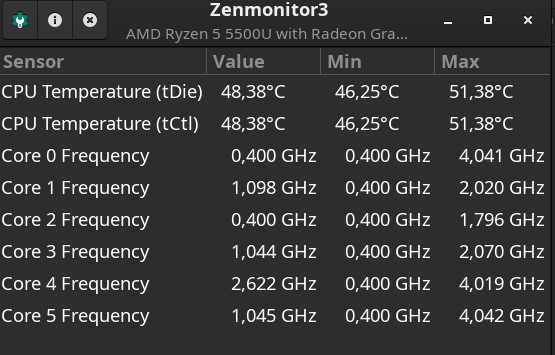 I know that this issue could be more at a problem of kernel.org or linux-zen actors but i just wanted to show it up here maybe someone can forward it to right direction.
Best regards

Hi @Mr.Ryzen, I'm glad you found a kernel you are happy with.

It is unclear what the issue or request is. Are you wishing for all other kernels to to be optimized for your specific hardware, like the linux-amd kernel is?

ue or request is. Are you wishing for all other kernels to to be optimized for your specific hardware, lik

oh no but i think this feature could be very energy saving special on notebooks because the battery will live longer and this Kernel is not available as binary so it has to be compiled.
I am sure this is not diffcult to enable by default also in Mainline Kernels.
And Garuda wants to be very userfriendly so userfriendly is also when the battery lives longer.

This is not the correct place to request changes to the Linux kernel.

One thing that might take the curse off using this kernel on your device would be having it pre-compiled; you could request it be added to the Chaotic-AUR by opening an issue here: Issues · chaotic-aur/packages · GitHub, or add a comment to this thread: Everything about Chaotic-AUR packages.

Maybe you could move my thread to the right section of this forum.
And i wanted to start here before requesting at the kernel-developers because for this i am too much noob.
I have been using Linux since very long time starting with Linux Mint and Ubuntu and Debian.... but honestly said i can not discuss with this Liga because i can not say which switch of the [config.x86_64] is different to Mainline-Kernels.
This is also the reason why i request here and i am sure there are throttle-potentials for Intel-Cpus as well.

@Mr.Ryzen, we have linux-amd in the chaotic-aur, so you can install it from pacman without compiling from the aur. 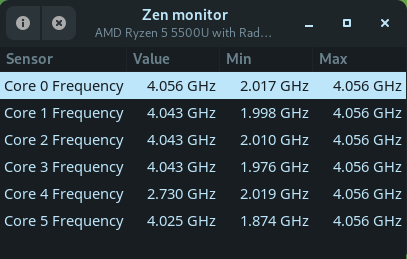 My results aren't as you have mentioned.

Are you sure its not just AMD-Pstate being enabled for this particular kernel?

could you please elaborate @dr460nf1r3? How To Use The New AMD P-State Driver With Linux 5.17

Since the release of the Linux 5.17 kernel the leading question in my inbox has been from readers asking how to actually make use of the AMD P-State driver Maybe a Bios update helps and enable pstate as mentioned !

I have posted some CPU utilization data here: Discussing Linux kernels for Garuda Linux - #6 by Austin