A new laptop that supports garuda

My distrohopping days are over now because garuda is amazing. If I had to buy a new laptop one day how could i know garuda would work?

Buy something with a no-strings-attached refund period. I can't think of anything else.

A database of all the hardware that works under linux

Generally most is supported.

If possible, try to get an Intel Wlan-module, not a Realtek or Broadcom. Intel is a big contributor to the linux-kernel, Realtek and Broadcom oftentimes don't provide good drivers. If it's an Intel or AMD CPU is irrelevant, both work fine out of the box. Nvidia GPUs do work, but I would prefer AMD (if you want a dedicated GPU) due to the AMD drivers being open-source and come right with the kernel (and the driver I think is better? Saw some benchmarks, but that might be out of date).

Apart from that... u could just go with something like Tuxedo: Notebooks / Laptops with Linux Netbooks Mobile - Notebooks - TUXEDO Computers
But that's a little expensive. I'm running an Arch Linux on my HP Laptop (14-cm0301ng), changed the Wlan-module (a friend had an Intel one, swapped it for the Realtek) and everything works fine. The Wlan-module did make some trouble not being able to keep the connection, shit like that.

Ohh, I just remembered something. There's a thread in the Arch-Linux-Forum:

If you find one you would wanna buy I'd check there if it's mentioned. Maybe someone already has installed Arch on it and can give you a thumbs up or thumbs down.

There is also this site: https://www.linux-laptop.net/
Which lists laptops capable of running Linux in general. But the site isn't too good tbh.

Buy a laptop that ships with Linux on it, like System76, Tuxedo, or the new HP DevOne.

The days of trying to find a windoze laptop that works with Linux are over.

I had an Intel/Nvidia Laptop from MSI, and it causes a lot of difficulty. So I buy an AMD Advantage Laptop, cause AMD have totally open source support. My model is an HP Omen 16 and I can just say, it is a beast for Linux gaming and works totally fine with Garuda Linux. I put a second NVM SSD for Linux in it, it was easy to open and assemble.

Thanks for all the awesome ideas!

The days of trying to find a windoze laptop that works with Linux are over.

Huh? My laptop is fairly new and everything except RGB and fans work​

And it is Intel&Nvidia. Also some of the forum members own new laptops with Garuda as well. If you mean stuff like Pluton then they have workarounds.

I see that I didn't choose my words correctly (again). What I really meant to say that the days of having to find a windoze laptop that is compatible with Linux are over. Meaning that we have more choices today than we used to.

Thanks for correcting me.

From personal experience: Dell XPS laptops works great with linux, which probably means the same is true for the Precision models. Most HP machines work fine with linux as well (ZBooks, Elitebooks, etc).

currently running an acer aspire a515. been running very well, no complaints.

Don't forget Lenovo and all the other Notebook Manufacturer 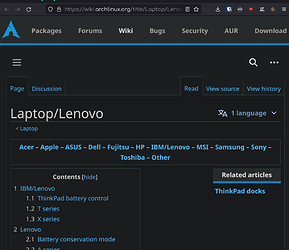 not sure i would recommend a "lenovo" anything to anyone. EVERY SINGLE ONE of the lenovo systems i have ever had has been a steaming pile. And more than a few of them have had basic platform features removed.

You can also use Linux Hardware and check to see if anyone has previously probed the laptop/PC model in question. Garuda Linux is included in the probing also. Why does the word 'probing' make me laugh?

I am happy with my Lenovo Notebooks

You should look for a laptop according to your ideas, then check if it is Linux compatible.
With new models it is always questionable if there are or will be drivers for Linux.

i wish it were that simple, it wasn't even "linux-based issues". one example would be a ryzen(1XXX) system that couldn't do "hardware accelerated" vm's. the motherboard/bios/whatever specifically was setup to prevent such usages. that wasn't a linux/windows issue as i tried both before finding an obscure post on "their forums" about others finding the issue as well.

not saying you are wrong, sgs. but that "issue" wasn't reported on that forum until after i had bought the system. AND i didn't try doing that on day one, at first i thought it was a linux issue, but because I kept the windows that was preinstalled and tried it there as well i discovered it wasn't. so yeah, checking for linux compatibility is good and all, but sometimes its little things like that that trip you.

I just look for cheap laptops from well known vendors, right now I have an HP, with good specs for the money. That keeps me away from the bleeding edge and more expensive hardware. It all works great and blazes with Linux on it.

Hi there @blasphemist , welcome to the community.

Will see you around !