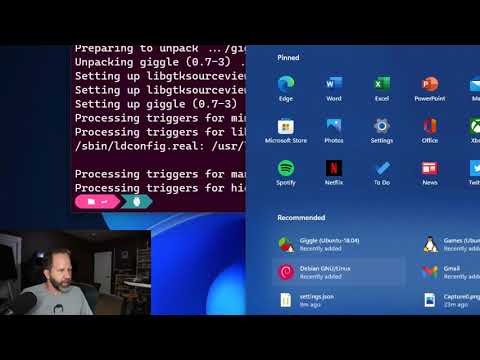 I just came across this Youtube video and it's funny the author even explains why he's running Windows 11 instead of a Linux. Just the fact he does that suggests he realizes it might be a FAQ.

I mean it's impressive how far MS is going with the implementation but I wonder who is actually using that and what the performance impact is. For sure I'm biased as I started using Linux in the 1990's and only touched Windows when I was forced to but I'd like to know how many Windows users think about using a native Linux installation instead of WSLg because it just looks and performs better.

WSL is excellent for devs in enterprises that will only allow windows10. It's a lifesaver, and WSLg will be even more so. I'm looking forward to my employer updating Windows for it for sure.

WSL is excellent for devs in enterprises that will only allow windows10.

Oh, right. I forgot about companies' IT policies. I mean it's weird a company would disallow a native installation but have no problems with a virtual one but yeah, that's how things work

Large enterprises would often rather disallow anything they don't understand that might be a risk, than spend the time to understand it properly. If I asked for a linux distro on my laptop they'd probably look at me like I'd grown a second head.

They do. They really do. Even like the Linux infra groups. “Why would you use Linux for a workstation?”

I worked for an international corporation and once asked, why would you force a Unix administrator to use a Windows client?
To keep a long story short, we installed Linux.

That's interesting that he's freshly installing all these, opens Ubuntu, and runs htop to prove it, while earlier today I saw a new DistroTube video where he talks negatively about Ubuntu's choice for quite a while now to leave out what he considers absolutely necessary programs such as git and htop. Then DistroTube runs htop on his freshly installed, just released today, Ubuntu and sure enough, no htop. Yes, Ubuntu was already installed before this guy began his presentation, but still, it just hit me as an odd way to prove Ubuntu is installed to run a program Ubuntu doesn't come with.

Large enterprises would often rather disallow anything they don't understand that might be a risk, than spend the time to understand it properly.

Very true. At one time in the 2000s I worked for a local government entity whose entire IT dept. was Linux-friendly, even though the rest of the agency was forced to run Windows. I was fortunate enough that they let me run Debian on bare metal with Windows in a VM.

Be nice to yer IT folk--they hold the keys to the kingdom.