Then it's just that your BIOS isn't seeing Garuda, but Boot entry actually exists.

Are you sure Fast Boot and Secure Boot both are disabled? Either of them leads you to enter "GRUB RESCUE" and prevent booting into Garuda.

What I suspect is that as you were able to use Garuda before force power-off, the BIOS settings were as needed, but as you forced power-off, your BIOS settings got reset or changed. There must be some settings in BIOS itself which should be changed.

What if my computer crashes?

I was clearly joking. Sorry for not adding a proper smiley.

Not sure if my computer came with a User manual that discussed BIOS stuff. If it did, it was all in Chinese, and I didn't bother reading it, because Chinese isn't my native language.

Nobody should be your instructor on basic consumer rights and responsibilities. Don't you think a worldwide PC vendor not provide an English manual?
Have you searched your vendor's website at all????
Here's a hint, which took me a right-click on your model info and search for 10 seconds.

If your UEFI/BIOS settings are reset each time you do hard reset, then it is a bug. Ask Acer for support, but you should first confirm you have the latest BIOS installed.

With a quick look in the user manual, it is obvious they are directing this laptop for Windows OS. I wonder why you try going against vendor's instructions... (that's an irony, if you don't get it

If this bug is not solved with a BIOS update, you may have some luck if you use a different $ESP partition for Garuda. This, of course, needs some knowledge and experience to do it, it's not automatic in the installer.
Maybe you"ll find some spare time to read more on Archwiki and web search.

Are you sure Fast Boot and Secure Boot both are disabled? 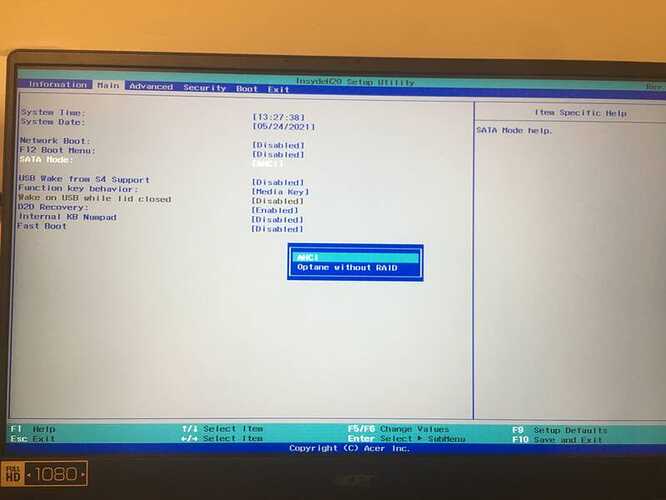 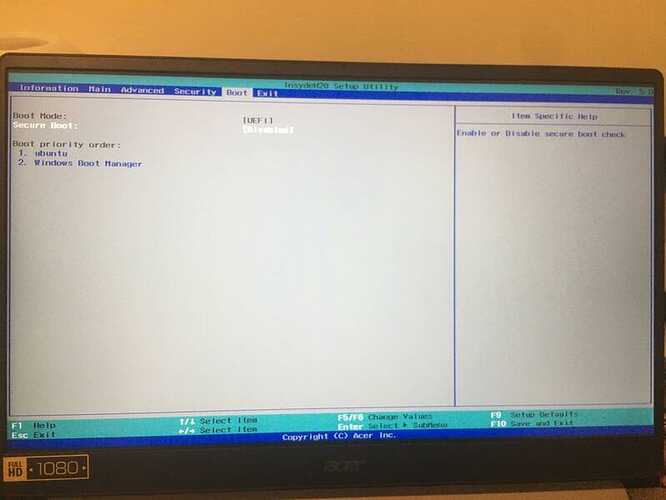 Note how Garuda no longer appears in, "Boot priority order," even though it used to exist there.

Nobody should be your instructor on basic consumer rights and responsibilities.

I was clearly joking. Sorry for not adding a proper smiley. 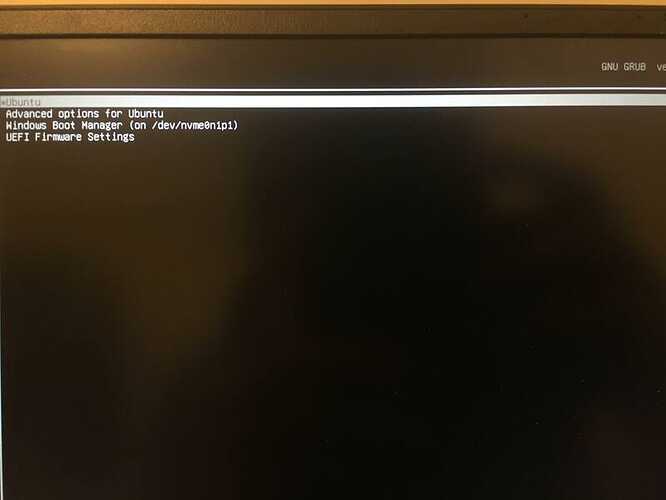 Some more photos (using a USB): 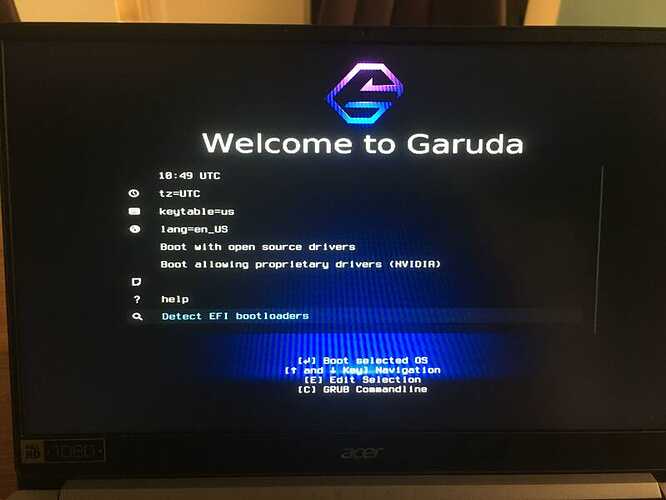 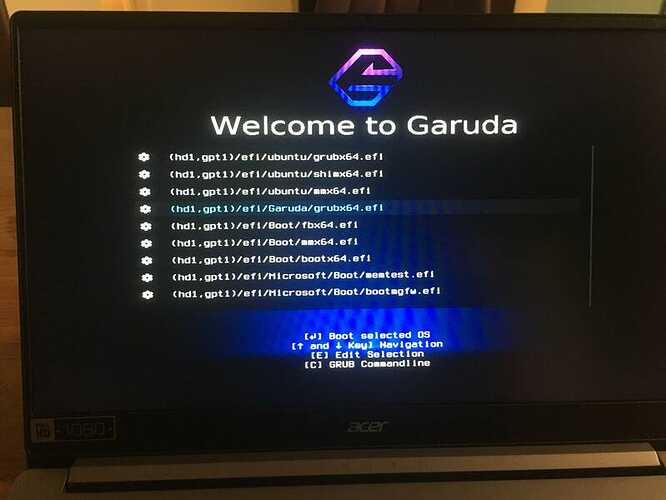 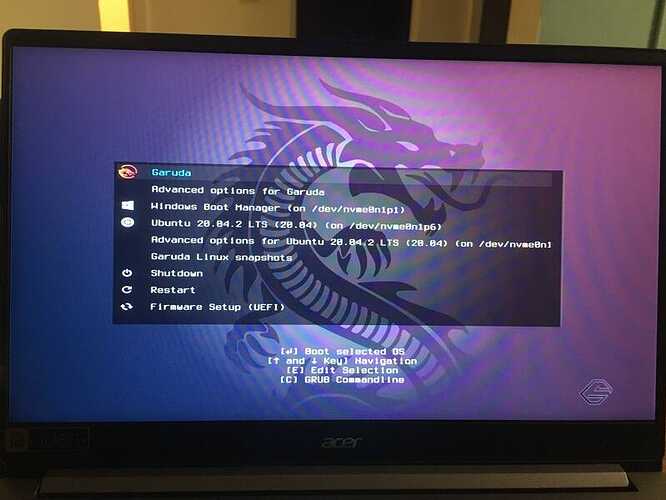 I see, it seems that in Acer's laptops you need to manually add boot entry from EFI to BIOS (this was the problem with my brother's Acer laptop and I manually added the boot entry in BIOS settings, I forgot that and maybe let you know later, but meanwhile you can check for it how to do by yourself).

ry mode to kick in and mess with my BIOS again. Note that I had backed up my original EFI partition, but it seems Garuda boot repair only res

Unfortunately I do not have extra HDDs in this laptop, but I will keep that in mind for the next computer I buy.

Something is wrong here... I'll post again about the other stuff, but I'm concerned about your BIOS version number.

You said you have BIOS version 1.21, which is what your screen says in the BIOS; in your picture it also displays the correct model #: SF314-57G

The problem is, your BIOS version # and the one of the Acer support website do NOT match.

From BOTH of the Acer/US and Acer/UK webpages for your model, both display the highest BIOS version of 1.18; NOT v1.21.

In both instances, the highest BIOS version is v1.18. Really, they should be the same; but potentially could be different if a special sub-model was made for a specific reason.

Using the UK version of the webpage, I went to:

The HIGHEST BIOS version number is 1.18.

Your BIOS shows the correct model number, but not the right BIOS version; not according to the Acer Support website.

According to the Acer page for your laptop:
SF314-57G

Before troubleshooting further, I suggest figuring out WTH is going on.

IF you have the wrong BIOS loaded, that could explain why the BIOS settings are reverted to factory defaults when you do a hard reboot.

You may want to review and verify, that you actually need the BIOS version 1.18...

I see, it seems that in Acer's laptops you need to manually add boot entry from EFI to BIOS (this was the problem with my brother's Acer laptop and I manually added the boot entry in BIOS settings, I forgot that and maybe let you know later, but meanwhile you can check for it how to do by yourself).

SameExpert has the best advice so far, the problem is: the F12 boot menu is for selecting which PHYSICAL (literal), hard drive to boot from -- not which partition.

The bootloader (in this case, GRUB), is what is used to select which partition to boot from; not which physical HDD to boot from.

Point being, the F12 boot menu is your best solution; if you had more than one HDD -- from your notes, you have a single HDD.

Using a second HDD (internal or external; or even a USB memory stick), with the F12 boot menu would be an EASY solution for picking different partition(s)/OS(s) to boot from -- go team easy. But, you got one.

Since you have a single HDD, I don't think using the F12 boot menu is a solution; for this situation.

I can't seem to find their comments atm, but the best solution (IMO), is to manually edit the bootloader (GRUB), and add the entry for Garuda to it.

Manually editing the bootloader's configuration file is something I've done before; a long time ago. But it's not something I can advise you on -- I don't have the experience.

I do have some references that could be helpful...

The last website I posted before, but I copied the wrong URL into the link; this is the correct one.

Using Grub Customizer could help in editing your bootloader to add Garuda as a boot option; but...

The Grub Customizer settings may work only from within the latest Linux/Ubuntu installation, the one that installed the Grub.

For example, if somebody has two OS-es installed (Windows and Ubuntu), and then installs a third OS (Manjaro, etc) and then tries to follow the above mentioned method, These changes will not work when made from the second OS (Ubuntu, in the example). The program has to be installed in the thirs OS, as it seems that Grub Customizer can only edit the Grub files created by the installation of the system on which itself is installed.

So, if you wanted to try and use the Grub Customizer; it sounds like you'd want to use the Arch version -- and install it from Garuda. This doesn't seem to help, as you can't boot into Garuda; as it's not in your bootloader. So this doesn't help, but I thought I'd provide the references to it; just in case.

About your HDD Partitions:

Windows Partitions (in no specific order):

Windows 10 won't install on a 3.1gb partition, so I know that's not your drive C:. It's ideal that you have your personal files and OS files on separate partitions; in your case, they appear to be on the same partition (159.8gb).

Ideally, OS files on C: -- the rest on D: or E: (whatever you assign). In Windows, it gives you the option to move your "My Documents", "My Pictures", etc. to another partition. Which is good to do in case you need to do an OSRI.

I think this setup may be a part of the problem, as dual-booting (triple), two different Linuxes; you'd want two root partitions and a shared /home/ partition.

There's no "linuxswap" partition for Ubuntu either.

So you need two more Linux partitions that what you have.

Finally, add another Windows NTFS partition if you want to keep your OS and personal files on separate partitions.

Everything I've read suggests having two separate root partitions is REQUIRED for dual-booting two Linuxes on the same system.

I suggest only installing a 3rd OS (2nd Linux), on an external HDD (USB 3.1). Unless you like having a headache, or risk going to jail for beating your neighbor's kids; up to you.

If you get an external USB 3 HDD, buy a quality case and hard drive separately; it's cheaper if you pick out a case and HDD yourself -- and install the HDD into the case yourself.

Using an external HDD will spare you from having dozens of partitions to manage and backup; and you'd be able to use the F12 boot menu to boot Garuda from the external HDD.

If booting from the Live-DVD ISO for Garuda doesn't convince you to switch, stick with Ubuntu; it's not worth the trouble to triple-boot -- IMO...

It was the rolling-release-cycle that sold me to switching to Arch (Manjaro) myself; from Ubuntu. Around 6 years ago or so I switched to Manjaro from Ubuntu, I had been using Ubuntu for at least as long before that.

IMO: Dual-Boot, or get an external HDD you can install Garuda on. Save your self HOURS and HOURS of time and trouble; and avoid having 3 dozen partitions on your HDD. @johngilbert2000