Maybe I should have put this under requests. Is this supposed to be in the Aur for installation?

There don't appear to be any Skylake kernels in ChaoticAUR. Are there supposed to be?

I installed it before. However, after learning more about arch and pacnew files I had to reinstall Garuda linux as I was not dealing with pacnew files (learning curve).

I had installed linux-tkg-pds-skylake through pacman previously. I really would like to run this again it was snappy!

Looks like all linux-tkg-pds were dropped from Chaotic, the only pds there is linux-lts 5.4.
I built mine from tkg git but I have definitely seen it on there before.

There don't appear to be any Skylake kernels in ChaoticAUR. Are there supposed to be?

There were skylake tkg kernels for pds, cfs and bmq for sure. perhaps more.

Chaotic-AUR, at around December of last year, lost a lot of processing power and couldn't support all the packages it did previously. The various kernels that were compiled for specific architectures had to be dropped, and now the tkg kernels are slowly getting compiled again.

I imagine they'll be available again sometime within the near-ish future, as recently a tkg-bmq piledriver kernel was put up (which for whatever reason I can't use because it kernel panics, but whatever). It is possible to compile it yourself, of course, but it's obviously understandable to not want to do that every time there's a new kernel available.

It is possible to compile it yourself, of course, but it's obviously understandable to not want to do that every time there's a new kernel available.

I don't really have the time at the moment to learn how to compile kernels unless there is a script and doesn't require a lot of space and must be able to pause or something as it would be on my laptop. So probably need to wait. But I sure miss the pds-skylake kernel. I think that can really feel the difference.

Edit: Is there a way to make a request for a specific package to get built a little sooner?

They were dropped as we coudnt keep them updated with the builder situation... However the kernel builder is back and building kernels since some hours (hopefully staying online this time)

Is there a way to make a request for a specific package to get built a little sooner?

The process isn't complicated if you want to consider it. I recommend it if you want to get the most out of tkg kernel.
You just need to git clone https://github.com/Frogging-Family/linux-tkg.git, edit customization file which is recommended but not required because the script will prompt you and ask most stuff anyways, then you makepkg -si and that's it. I don't know how slow compilation will be for your system but you can make it much faster if you use modprobed-db. 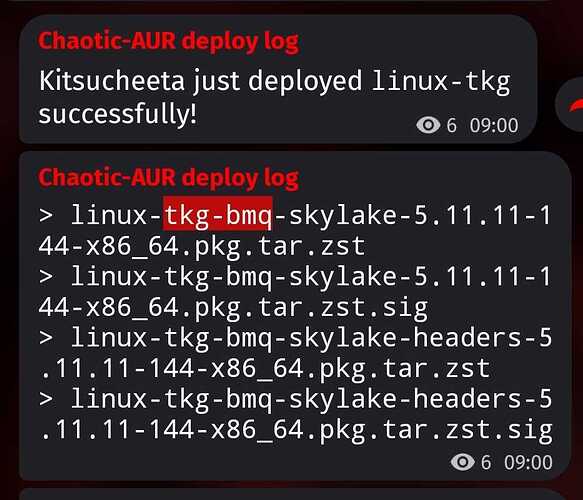 Talk about good timing! Thanks again. I saw that muqqs skylake is also in there now.