This is a different widget, the one Dragonized currently uses causes blank space.

I was testing Active Window Control on kde-git and that space was left blank if not using standard white arrow buttons. It's possible I didn't use the right setting, though, which is why I will try again. 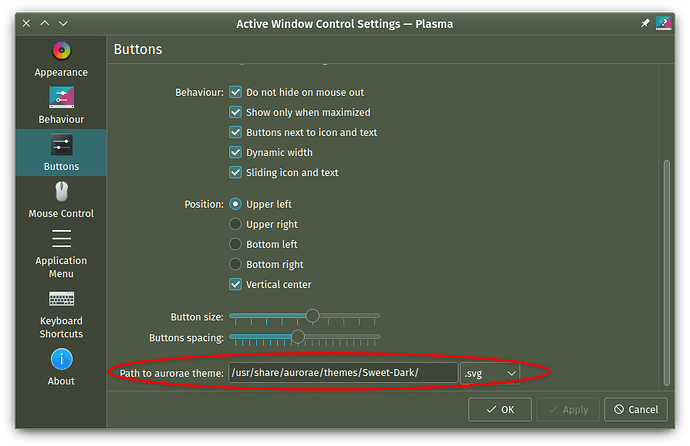 I think I could came up with something very very interesting.

For comparison, this is how squared the focus-hover is by default in Sweet (I did not change this):

I think I prefer the 20%! It is more subtle, but still obvious what is highlighted and looks good I think.

Is this intended behaviour? (look at text) Dragonized Next, Plasma 5.26.90

@dr460nf1r3 do the Plasma native panels offer lower resource usage (since they are already loaded and part of framework) and better performance than Latte. I also run this on a much lower end laptop (yes I know I should be using Lite version but what can I say, I like KDE and all the utils, and its not that bad). I think it should, yes?

If you are on very low end then yes, panels are lighter than Latte and it is worth the switch.

It was actually Latte Dock the whole time... That's why EndeavorOS performed significantly better. To readers from the future, Latte Dock causes these problems. And the dr460n1z3d well, dr460n1z3d stuff, to a lesser extent.

I can only guess probably not? That transparent text effect only seems to be present in some windows' text. I am seeing the same thing you are and I am not using Dragonized Next or the latest beta plasma (I'm using stable 5.26.5)

Then I think it is intended but used for a long time before Dragonized Next.

@FGD TOO funny cause I just scrolled back up and finished reading your post. Specifically the bottom part of it that I didn't read before posting the above.

Talking about Active Window Control, I've noticed a potential bug that seems to only be present when the window buttons are showing (either with its on all the time setting or only when maximized). It seems the bug has to do with an interaction with Steam's menus (at least Native stable). After clicking around and hovering around its menu (with the large STORE LIBRARY etc menu), it seems to crash plasma (but it will reload automatically).
Looking at the journal, it gives me a message about (libQt5Core.so.5 + 0x2d8b2c) every time it happens. I can only assume its because it actively tries to refresh information quickly (hovering over the menus gives a window title of Plasma Desktop instead of its usual Steam title).
I am not totally sure if this plasma crashing bug is just with my specifically customized plasma panel or not, and I will try more extensive testing on a guest account with just the buttons from Active Window Control later if needed.

I configured AWC to show for maximized windows only and when I hover on Store Library etc. Plasma treats the context menu as a seperate window and focuses to it. When this happens AWC disappears because the so-called "window" is not maximized.

Saw that you have it set that way.
Shouldn't be an issue unless there is a maximized Steam window then.

Is this intended behaviour? (look at text)

Never seen transparent txt like that, never heard. But so far I could not reproduce either. This is on bare metal machine or VM?
Could be something related to Kvantum settings.

I checked that during my testing and I believe it does offer lower resources usage. I will try to come up with numbers later this week.
Performance is faster and smoother for me. For example, it launches on login A LOT quicker than Latte. Interaction with the dock and panel is virtually instant too.

That's... odd. I've noticed it for a very long time. It only seems to be a specific kind of window text however. You did try looking at the same window in Active Window Control, right? Otherwise it might be a specific graphics related bug... hmm...

You did try looking at the same window in Active Window Control, right?

Not recently, only 22-23 days ago. It's on my list to go back and retry, though, but at that time there weren't any txt issue in AWC, neither other applets' menu (inline battery, systray, weather, etc.).

If you guys are are stilling figuring out the design - I'd like the Dock to have "hover Zoom icons". This gives me less static, more intuitive feel over the dock (I use 5% zoom on hover).