Hello everyone,
Just installed Garuda alongside windows (replacing manjaro), to hopefully get a bit more into linux as a main OS...
I have a dual-GPU (2x asus GTX1080ti) setup with 4 monitors. The problem is that monitors that are connected to the second GPU are detected in display settings, but no signal is output to them. Checking the "active" doesn't do much besides letting the screen to scroll to the area where the display should be when the cursor moves offscreen.

This setup did work on Manjaro, I don't remember if I got it to work manually or if it worked after merely updating the drivers.
I feel like there is something really simple I'm missing, but I'm failing to find any relevant information by searching around here, arch forums or search engines.
I auto-installed the proprietary drivers with the mhwd, which was probably done by the installer/updater anyway

after reboot it didn't change anything.

Small update, it seems to have to do with the X configuration?... I messed with the nvidia-settings app and managed to get the display on the second GPU to display the login screen, but then it was black with the mouse cursor stuck (a cross) on it. It would only allow it to be on a different X screen, though, which messes with my arrangement.

Either way, the GPU is working and it can output signal to the display, but I guess I have to make a custom config for it?...

I will try to document further attempts to solve the problem if it maybe helps someone else. I don't think I will change the title (I will maybe add to it when the problem is solved) for now, as what's in the title describes the problem I was having as I saw it.

Can you describe more precisely what changes you made that yielded this result?

it seems to have to do with the X configuration?

Paste what you've got so far into the thread if it would be helpful for someone else to look it over for you.

Can you describe more precisely what changes you made that yielded this result?

I enabled the display as a new X screen. The other displays were on X screen 0, while the other went on X screen 1. After that I rebooted, as I wasn't sure how to restart the X server without it

After reboot, I had the login screen, but after logging in the monitor was black with the stuck cross cursor.

Paste what you've got so far into the thread if it would be helpful for someone else to look it over for you.

Dumping the xorg.conf (I feel like nvidia-settings was being more cooperative now than before) - the displays aren't arranged quite right, but the monitor is now getting signal and the cursor can be moved on/off it. It is overlapping with another display. 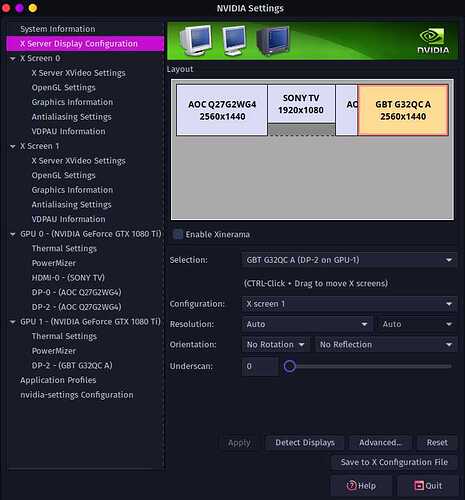 image731×786 47 KB
When I move the cursor off the rightmost screen, it appears where you'd expect, the border being where it is.
I cannot move any windows to the other X screen, though.

edit - looking a bit closer, I see SLI and multi-GPU options that are off. I do have the cards connected with the SLI bridge. What do those options do?

edit2 - completely random question - two of the displays have desktop backgrounds, while the other two don't (one being the one on the second GPU/X screen 1, other - on the first/X screen 0 along with the two that have backgrounds) and RMB on the desktop does nothing - how do I set the background for all displays? - this is probably material for a separate topic, though.

yet another edit - to specify, the stuff that shows up on the other-GPU display - not the login screen, but the animation after logging in and the shutdown menu.

edit4 (after next post) - enabling xinerama made the actual login screen appear on all displays, but when on desktop, the dock was gone, and the GBT only showed cursor. When I clicked there, the corners of the background popped up on the corners of the AOCs where they overlap, but there is/was nothing on the GBT - it was black. Now I reverted back to xinerama off.

I changed the layout of the displays to slightly closer resemble what I have IRL: 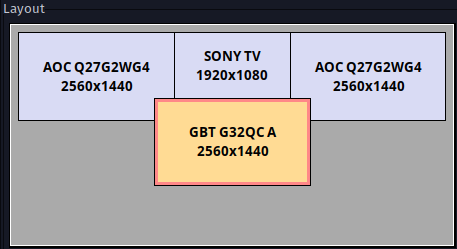 I can move the cursor from the GBT to sony, but not from sony to GBT. This is likely somewhat irrelevant to the issue of getting the displays to work as I want, I'm kind of keeping notes of what's happening here and issues I trip on

I DID IT
So basically, I used nvidia-xconfig -sli=mosaic and had to write out the appropriate metamodes manually-ish, but it ultimately worked EDIT: I think the key aspect was, as mentioned in the nvidia SLI link, was initially checking the box of the base mosaic (surround) with one monitor connected to each of the GPUs. The details I probably won't be able to type out all the way right now, if someone wants - I can try to help.
Probably most useful resources:

Very useful command for debugging/testing ("how to restart xorg server"): sudo kill Xorg
For me it sent me to the login screen (and closed all the windows), but if it drops you into console, I guess you can just run Xorg or sudo Xorg

Dumping my xorg.conf (this caused one of the displays to be disabled by default, but after manual enabling it worked fine):

This one works now, though it seems to contain some UUID-looking things that almost certainly won't work for anyone else:

I couldn't edit my messages more than once... I undeleted this one for the changes in the xorg.conf to be visible.
The first one disabled one of the displays, making me have to manually enable it after a reboot.